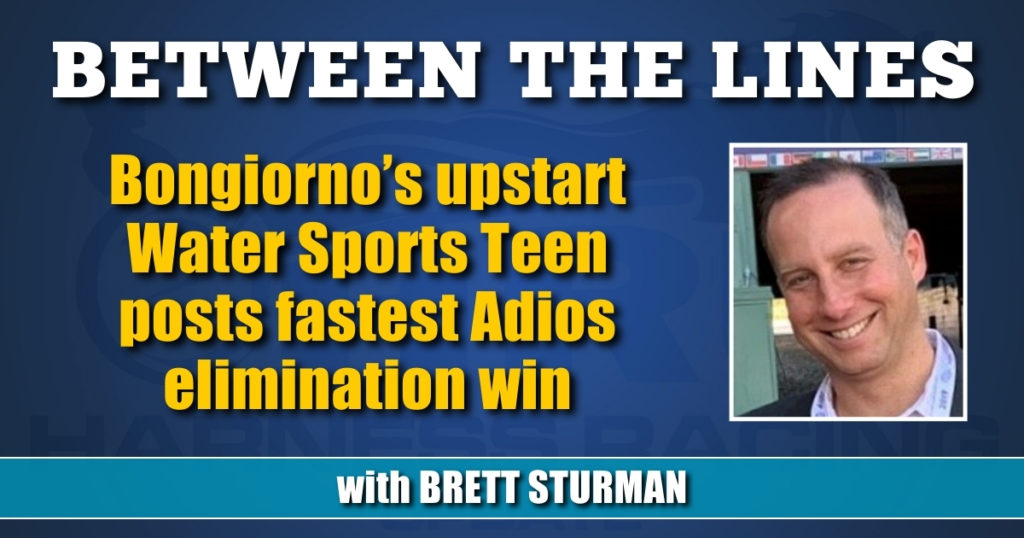 The colt dominated his division to improve to three-for-three since moving to his new barn.

In a 3-year-old division that’s already seen its fair share of ups and downs amongst the presumed best horses of the crop, it was Water Sports Teen (Somebeachsomewhere–Posey Tina) who made his presence felt at The Meadows on Saturday afternoon (July 24).

The way Water Sports Teen disposed of evidently higher regarded foes is just as impressive as the race time itself. Making his third start for the new barn and sent off at odds of 4-1, the strategy was clear from the onset as driver Joe Bongiorno took Water Sports Teen immediately to the front. Dexter Dunn attempted to retake from the pocket approaching the quarter pole with even money favorite Rockyroad Hanover, but he was quickly rebuffed and had to settle to sit second. Showing no signs of slowing while coasting through fractions of :26.3, :54.2 and 1:21.2, Water Sports Teen finished it off with a :27 flat final quarter.

In that victory, he made second finisher Rockyroad Hanover and third finisher Lou’s Pearlman look ordinary. Three races back at this very track Rockyroad Hanover beat Perfect Sting for all intents and purposes. Lou’s Pearlman was coming off consecutive 1:47.4 and 1:48.3 wins at the Meadowlands. The latter was well-beaten almost five lengths in third and the former, Rockyoad Hanover, was never going to catch the winner though he did make some late inroads. It was the first career stakes win for Water Sports Teen.

Powered by trainer Jennifer Bongiorno, Water Sports Teen ran his record to three-for-three and has dropped his career best mile by nearly three full seconds since moving to that barn for his first start earlier this month. And to assess this horse’s chances in next week’s Adios final as well as his place in the division, it’s worth noting his rapid ascension.

To be clear, Water Sports Teen is a nice 3-year-old. After four starts to begin the year with Andrew Harris, Water Sports Teen went to Todd Luther and promptly won four in a row in non-winners of 2 and 4 conditions, climbing the ladder at Miami Valley. His best time in those wins came in 1:51.3. From there, though, Water Sports Teen seemed a couple steps behind the better sophomores in Pennsylvania. For example, in a PA All Stars race on May 8 he worked out a pocket trip to One Eight Hundred but couldn’t do anything with that rival from the two hole and ran second. Next out he took a good first-over run in a Pennsylvania Sires Stakes (PASS) race against Southwind Gendry before tiring to finish fifth. Then, as a 66-1 longshot in another PASS race, he finished a never threatening last. In his final start prior to the barn change, Luther took him to Scioto where he dead heated for win in 1:51.1 in a NW6500L4 conditioned race.

From there, Water Sports Teen raced two weeks later in the new barn. At Yonkers and over a sloppy rated track with a chart showing a 2-second allowance because of the conditions, Water Sports Teen blasted from post 7 through an opening quarter of :27 flat and rolled all the way to an open length win in 1:51 flat. He was sent off at nearly 4-1 that night, but the cat was out of the bag and in his next start the following week in the same condition, Water Sports Teen jogged in the exact same way, this time at rock bottom odds of 1-9.

Raging in career form and combined with how the other two eliminations played out, I don’t think it’s an overreaction to think that Water Sports Teen will carry Adios favoritism with him in next week’s finals.

Both odds-on favorites went down in defeat in the other the two eliminations. Beginning with the first elimination, Southwind Gendry – coming off a bumpy gaited ride last weekend in the Meadowlands Pace – was inexplicably bet down to 30 cents on the dollar and faded late to be third despite being kindly rated through soft fractions relative to the other eliminations. Seemingly out of nowhere the Okusko-trained Natameri took a bold run down the backstretch at odds of 74-1 and took it to Southwind Gendry around the final turn. To his credit, Natameri eventually wore down and got the best of Southwind Gendry but lost to Abuckabett Hanover who capitalized on the two-hole trip to get the lightning lane win. The final time of 1:50.3 wasn’t flashy, but it could give Abuckabett Hanover confidence heading into next week’s final. Prior to his Adios elimination win, he came off a couple of races with no-shot trips and in between there was a softly run Meadowlands Pace elimination. He was all the rage earlier in the season.

In the second elimination, the big surprise was 4-5 favorite One Eight Hundred fading to last. After an innocently stated reason for Tetrick having to take him to the inside last week in the Meadowlands Pace, it was shades of last year when One Eight Hundred set hot fractions on the front and tired. The race was won by Hellabalou in identical fashion to Abucketabett Hanover from the prior race. I don’t know if that win by Hellabalou dispelled totally his 80-1 Meadowlands Pace elimination as a fluke, but there’s no question he gets along amazingly well with McCarthy. He did capitalize off the trip, but he did have to leave into an opening panel of :25.4 to get that spot and deserves respect for next week’s final. It was another bomb in for second as Mysweetboymax was no factor in the Messenger but prepped for the Adios with a confidence-inspiring win at Philly last six days ago. Chase H Hanover came first over but flattened late; probably should have been a touch better.

The complexion of the Adios changed dramatically with the results of the eliminations, but those results will only add to the intrigue for next week’s final.