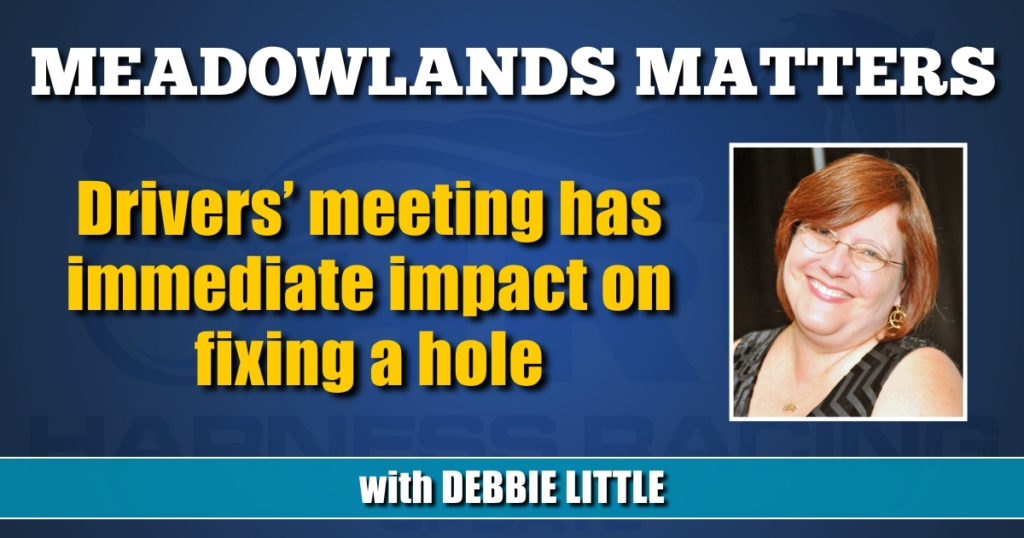 Jeff Gural’s meeting with drivers last Friday had an instant impact on the races at The Meadowlands, but is it practical for drivers to always close holes and drive more aggressively? Some top drivers weigh in.

There was a drivers’ meeting held before the Meadowlands’ card on Friday (July 16), the results of which had the track’s president and chief executive officer Jeff Gural feeling hopeful for the future.

“We got them to close the holes,” said Gural. “Anybody who watched the races [Friday] night had to be thrilled. It was completely different, especially the 13th race. It’s good that they were willing to cooperate in trying to make a better product for their customers. I was encouraged.”

Gural has consistently expressed his enmity for courtesy tucks, so it’s no surprise that it would be one of the topics at the meeting.

Half the field was in and half was out as Tyler poked a head in front just past the :26.3 quarter, but was never able to clear as McCarthy hit the gas.

When McCarthy suddenly sped ahead, it was a bit of a surprise to Dave Miller, who until then thought he’d be going from a perfect pocket to fourth at the rail.

“In just an instant, Andy changed his mind and took off and he got away from me and there was a hole where Tyler could have jumped in there but I closed it up because that’s where I wanted to be,” said Dave Miller. “That was my strategy [to follow Andy]. We’re thinking the whole time. We’re planning and it’s quite interesting. It’s not like we’re just out there YEE-HA! I take pride in driving smart.”

Right past the three-eighths pole, Gingras moved three-wide around Callahan as Tyler Miller started to back up. Gingras was first over as they passed the half in :54.1.

“I think the race would have been completely different if it had not been for Jeff,” said Gingras. “Somebody should have wanted to drop me in as one of the favorites and maybe I’d give them a second-over trip. If I’m not out there then maybe Andy McCarthy lets Tyler Miller go and then retakes. But he knew with Tyler being out there and me being behind him there were [a lot] of people in the outside tier that if he let Tyler go, he would never have seen daylight again.”

In the end, the strategy worked out for Dave Miller, who won, and McCarthy, who finished second. But as exciting as the race was, it’s not necessarily an ideal way to race.

“Realistically, we can’t be racing horses like that week in, week out,” said Gingras. “I think it’s just too hard on the horses. There has got to be some strategy involved and I agree with Jeff if you’re dropping people in just because it’s your friend and you’re not going to use it as a strategy, I think those types of holes need to stop. There’s no place in horse racing for stuff like that. That part I agree with.”

After speaking with drivers during and after the races that night, Big M management has chosen to revisit the situation when racing returns in September after the break following The Hambletonian.

But don’t think that means out of sight, out of mind.

Gural and Big M chief operating officer and general manager Jason Settlemoir take all the rules discussed seriously and expect all drivers to understand and comply with them.

What does concern several drivers is if their horses are not good enough to keep a hole closed.

“Say I win non-winners of three and it goes 1:51,” said driver Tim Tetrick. “The next class is non-winners of four, five or six. So, you’re telling me that this young horse that just got out of non-winners of three is supposed to compete with the next class. A lot of times it can’t. They’re just not good enough. So, if I draw the rail, he wants me to shut everybody out of the hole and shut the two-hole in a 1:49 mile when my horse just can’t do that.”

The New Jersey Administrative Code (NJAC) section 13:71-20.6 (a) states “Although a leading horse is entitled to any part of the track except after selecting his position in the home stretch, neither the driver or the first horse nor any other driver in the race shall:” and part 11 says “Laying off a normal pace and leaving a hole when it is well within the horse’s capacity to keep the hole closed.”

However, dating back to the time when Joe DeFrank was race secretary, the unwritten, yet widely understood part of this rule is if a driver has the capability to close a hole but chooses instead to drop someone in for strategy, then he must move out and advance.

“These are rules that are violations of the NJAC and those rules are put in place for a reason,” said Settlemoir. “And you can’t tell me that courtesy tucks and the friendly-style driving that occurs on the track is good for the sport.”

The judges will enforce the rules and give fines and suspensions as they see fit, but Gural and Settlemoir will also be watching and may dole out penalties of their own.

For the first offense, the driver will be given a warning from track management. In addition, they will be afforded the opportunity to plead their case about what happened in the race.

“We’re not trying to be difficult here, but rather relay the messages that our customers continue to email us and complain to us about it. We’re asking that the rules and regulations are adhered to and if they’re not adhered to that the fines and suspensions are going to take place whether that comes from the state or from us as the private entity. That’s what’s going to happen.”