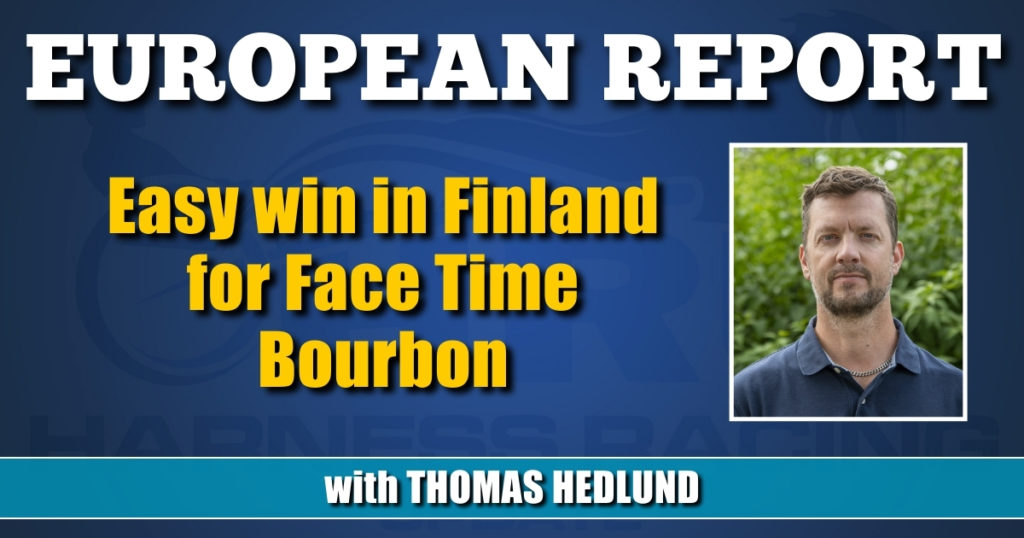 The $190,000 S:t Michel-ajo mile race was held in Mikkeli, Finland on Sunday (July 18) afternoon and French world champion Face Time Bourbon (Ready Cash) had no opponents that could stop him from capturing the big trophy.

However, a heavy rain, hours before the race was scheduled, ruined all plans for a new world record on a 5/8 mile track, so the objective of winning the race became the most important thing for driver Eric Raffin.

Finnish-bred Next Direction left quickly for the lead and with a half mile to go, Face Time Bourbon had worked his way against the leader and was in front. The pace wasn’t especially high, but with 500 meters to go, Raffin let Face Time Bourbon take off and the duo left pocket-sitter and the rest of the gang several lengths behind.

Raffin, a top driver in France, charmed the fans by winning the Paralympiatravet at Åby in May paired with Delia du Pommereux (where Raffin got fined and suspended for using the whip, which he hardly did) and it was pretty clear that he enjoyed the trip behind champion trotter Face Time Bourbon in Finland. Raffin cheered with the great audience in Mikkeli at the top of the home stretch. He had a fun, enjoyable trip with the maybe best trotter in the world. Face Time Bourbon flew the last quarter and recorded a 1:52.1 mile. Next Direction was the runner up ahead of Face Time Bourbon’s stablemate Billie de Montfort.

Rumors abound that Face Time Bourbon might make a journey across the Atlantic Ocean alter this year, but that scenario seems less likely since Sébastien Guarato’s trotter has a very important title, the Prix d’Amérique, to defend in his home country in January next year.

The $115,000 Årjängs Stora Sprinterlopp attracted many great milers when the Swedish V75-circuit landed in the western part of the country on Saturday (July 17) afternoon.
And it was Italian trotters that dominated the prestigious race in Årjäng. Alessandro Gocciadoro wasn’t too pleased when he earlier in the week noticed that post 1 trotter Tae Kwon Deo was scratched as his own Vernissage Grif had post 2 in the entries list, moving Vernissage Grif to post 1. The Italian chestnut is not known for his quickness off the gate, so number one could have been a trap for him, especially as the two outside horses, Click Bait and Missle Hill, both are known as quick leavers.

It was the latter-named duo that made the fast moves when the car left the field. Click Bait managed to pass Missle Hill before the first turn, but the quick start opened up the field and Gocciadoro could easily lift his Vernissage Grif out in a position in second, third over.

Jerry Riordan trained Zarenne Fas was seen three wide throughout the first turn and he landed outside the leader Click Bait after 600 meters, while Missle Hill followed in second over with Vernissage Grif on his back.

Missle Hill tried to attack three wide at the back stretch, but the Muscle Hill son was out of power this day and behind him, Vernissage Grif got the order to attack four wide in the last turn and the yellow suited Gocciadoro seemed pretty satisfied as he passed Missle Hill and the others.

Zarenne Fas disarmed Click Bait just some meters ahead of the wire, but he was, at that point, already beaten by Vernissage Grif, who almost jogged to safe win in 1:52.1.

Zarenne Fas was extraordinary as the runner up and, without a doubt, the two best horses in the field were Italians.