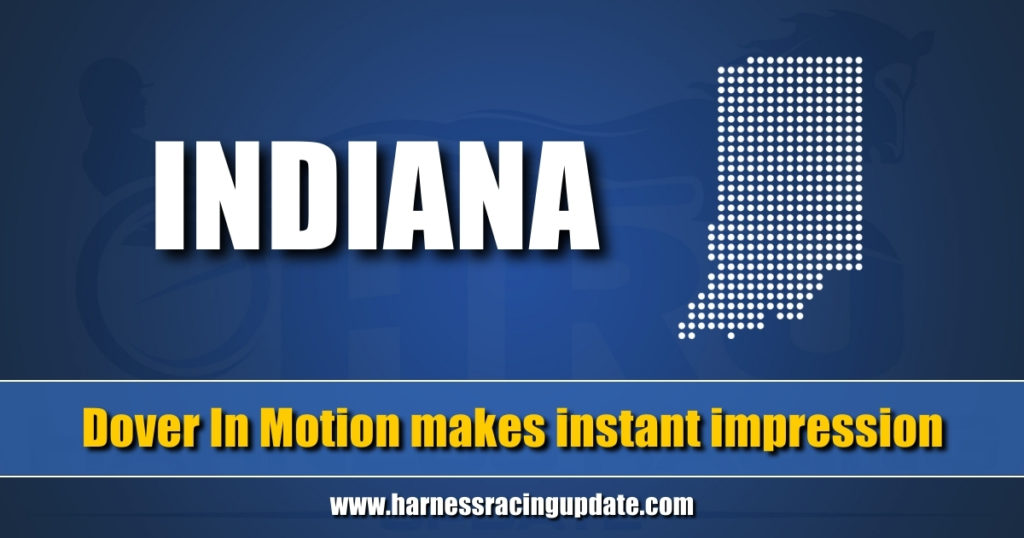 Swan In Motion’s brother made his career debut a winning one in Indiana Sires Stakes competition for owners M & M Racing of Goshen, IN, and Norbert Maza of Burbank, IL, trainer Jamie Macomber and driver Ricky Macomber, Jr.

Dover In Motion did not turn in the fastest mile on the program held Friday (July 16) at Harrah’s Hoosier Park. In fact, his winning time was not even the fastest of three Indiana Sires Stakes (ISS) events that evening for freshman trotting colts. Trotting almost 20 lengths off the lead at the halfway point, the gelding produced the most memorable back half on the card, rallying to reach the wire before all others and stopping the clock in 1:56.3. The son of Dover Dan—Keystone Sadie made an impressive statement in his pari-mutuel debut for owners M & M Racing of Goshen, IN, and Norbert Maza of Burbank, IL.

“He trained super the other day. You never know this early in the game,” said Jamie Macomber, who conditions Dover In Motion for the partnership. “The other day training he did the same thing; we drew off in the stretch, so you know he’s got it, you know he wants it, you know he likes it. But nobody knows that your 2-year-old trotting colt has a back half in :54 until they do it.”

Fans of Indiana racing may feel a sense of deja vu. After all, Macomber conditioned Dover In Motion’s big brother, Swan In Motion, for two seasons for the same owners. The arrangement worked well for all parties. Over those two campaigns, Swan In Motion accumulated an 8-7-2 record in 22 starts, banking $396,845 for the connections. As a sophomore, the trotter captured the $270,000 Indiana Sires Stakes Super Final before selling for $65,000 at the Standardbred Horse Sale last fall.

The partnership used the success of Swan In Motion, and his subsequent earnings and sale, to reload for 2021. They purchased his sibling, bred by Lyle Slabach, at last October’s Hoosier Classic sale, hoping to have another stakes-caliber horse in the making. From the first crop of Dover Dan, the colt, named Kwik Kramer, was cataloged as Hip 185 as part of the Integrity Stables consignment. He brought $50,000, with Ora Miller signing the ticket. The price tied for the third highest shelled out for a Dover Dan yearling, and the second highest-priced colt from the sire over the two sessions.

“It was uncomfortable to me, but he was the only horse I really wanted,” Miller said of the amount the yearling fetched. “I watched when they recorded his yearling video. That’s when my mind was made up. This horse was a natural. He was much better gaited than Swan In Motion ever was.”

Miller developed Dover In Motion over the winter and spring. The freshman would have arrived at Macomber’s shedrow at Hoosier Park in March, but an abscess delayed the move and his debut. The trotter did not see his first action until qualifying on July 7 at Hoosier Park. That day he sat in the pocket for Ricky Macomber Jr. until turning for home. Dover In Motion sprinted home in :28.1 and finished more than three lengths in front, timed in 1:59.3. The result was not a surprise to Miller, who had attempted to train the freshman the Saturday before with a pair of pacers. It didn’t work out as planned, as his charge marched away from the other two.

“I trained him here in 2:05 and I never asked him to do it,” he said. “I’ve never had a 2-year-old trotter train like that here. I was hanging onto him. He trotted the last quarter by himself.”

Macomber describes the gelding as a perfect gentleman. Since settling in at Hoosier Park, the young trotter likes to stand with his head over the gate in his stall, watching everything that takes place in the barn. When comparing Dover In Motion to his Swan For All brother, she explained they only have one thing in common.

Making his debut in sires stakes nine days after the qualifier, Dover In Motion drew post 10, a trailing position at Hoosier Park. Conditions were not optimal Friday evening, with rain in central Indiana downgrading the track to a “good” rating. When the gate folded, Ricky Macomber patiently took a seat in eighth as Racer Dan and James Yoder set the tempo with fractions of :27.4 and :57.2 before relinquishing to the first-up Golden Elixir at three quarters (1:27.1). Rounding the turn and heading home, the distance between Dover In Motion and the leaders seemed insurmountable. But the 2-year-old shifted into another gear and stormed down the center of the track, using a :27.1 last quarter to brush past most of the field on the way to a two and one-half length margin of victory. Racer Dan, another Dover Dan colt, held on for second, followed by Sweet Boy Ben.

“In the stretch you’re thinking, ‘Oh my gosh he’s not going to get there,’ but he’s racing great,” said Macomber. “All the credit goes to Ora for getting him ready.”

Miller is accustomed to taking difficult trotters and pacers that nobody wanted and making racehorses of them. Dover In Motion is not like the other project horses that have passed through the barn. He required little extra attention, simply a regimen of jogging and training. With a win under his belt, Dover In Motion will be targeted as one of the top in the division when the next sires stakes leg goes postward. His connections hope there are more winning miles to come.

“First of all, you just hope that he comes out of it okay,” said Macomber. “I’m just happy with the 56 mile; pleased and thrilled with him. It’s going to be a good summer.”