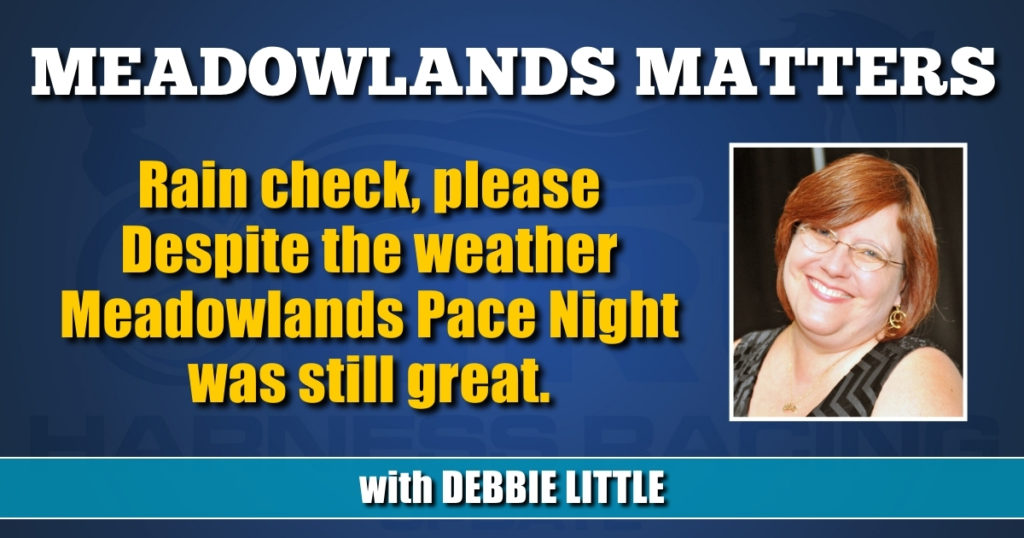 Storms put a bit of a damper on the euphoria expected for the first Meadowlands Pace since crowds have been allowed to return to The Meadowlands, but overall it was still a great night.

Coming off a year when the COVID-19 pandemic affected all major sports, everyone was hoping for a memorable – yet normal – Meadowlands Pace Night.

The State of New Jersey did its part by dropping attendance restrictions at the beginning of July.

Unfortunately, mother nature must not be a fan, since the violent storms that had been predicted for days crashed the party.

Heavy rain with lightning and thunder moved in about four hours to post causing power surges in neighboring communities, but by 4:30 p.m., the sun was out and everything seemed to be right as rain.

The threat of thunderstorms curtailed some of the outdoor activities, but people wearing or carrying the lime-green giveaway t-shirts were still crowded on the track apron enjoying the first race at 6 p.m.

“It’s nice to have fans out there,” said driver Scott Zeron following the first race. “They might not be out there for the main race because it’s going to be raining most likely, but it is certainly a different atmosphere. It’s a good crowd.

“Last year, there was almost a sense of gratitude just to even be racing, so I think that’s how we took it. Tonight, though, it feels like it’s back to normal.”

The paddock was buzzing with activity, which wasn’t the case for Pace Night 2020.

Paddock Judge Jim Kopacz remembers how quiet it was last year due to COVID restrictions allowing for fewer horses and grooms and no drivers in the paddock.

“[The drivers] had to stay in their parked cars and they would pick the horses up outside, they weren’t technically allowed in the paddock,” said Kopacz, who’s worked in the paddock for 25 years, the last four as paddock judge. “It’s a very important night tonight, there’s a lot going on, but I take my job as every race is important. I try not to have anything get by me.”

The Big M’s top owner, Tom Pollack, was checking out all of his horses prior to the races, something he chose not to do last year, even though he had a longshot in the 2020 Pace.

“We had been here two weeks prior and we drew well but knew he was an outsider and chose not to come back because of COVID and the issues with traveling,” said Pollack, who lives outside of Pittsburgh, PA. “I think with everyone able to shed the masks and not having to do the paperwork and just moving freely, it’s got a very different feel. It’s kind of back to normal in my mind.”

Hall of Famer Jimmy Takter was part of the 2020 Pace festivities as his daughter, Nancy, trained the winner, Tall Dark Stranger.

“Winning a big race like the Meadowlands Pace meant a lot for us,” said Takter. “Nancy pulled it off, I was never able to do it and it was special. There were a few owners there but Marvin Katz was stuck in Canada. It would have been special if he was down here, too, but we’re back to normal now, it’s past. I’m not known to look at the past, I look for the future.”

Takter drove in two races Saturday night and thought that no matter what the weather threw at them, the track would be ready.

“They try to get the best track they can for every single race,” he said.

The first couple of races went off without a hitch but as the second race victor returned to the winner’s circle, a drizzle followed him.

The party atmosphere on the roof wrapped up early as announcer Ken Warkentin advised fans prior to and following the third race to seek shelter in the building from the impending weather.

Meadowlands’ president and chief executive officer, Jeff Gural, was happy with how things were going, comparing this year’s Pace Night over last year’s, except for the weather.

“I don’t even remember last year to tell you the truth,” said Gural with a chuckle. “It’s like I erased it from my memory, because without customers, I wasn’t here. I didn’t take a chance. It’s obviously better [this year], but it’s just frustrating that the weather is not cooperating. We have a great facility on good weather days.”

One thing that was not affected by the rain was the attendance at either of the track’s restaurants, Trotters and Pink, which were at capacity.

“This is electrifying, because it’s so great to see everybody enjoying themselves,” said Big M executive chef Dennis Sammarone. “Pink is really rocking. Everybody’s enjoying the food and having a great time. That’s what we do here at The Meadowlands. It’s all about service. We always try to give the best service we possibly can.

“I do have a great crew. I can’t take all the credit. I give all the credit to them. My staff does a great job. I’d put my buffet up against anybody in the state. At the end of the day, I want to be sure that our guests leave happy.”

The sit-down option was not the only one chosen by the fans that night. The café was crowded and the hot dog cart even had to take a 15-minute break to cook more dogs because of how busy it was.

Track photographer Mike Lisa has been providing photos for owners throughout the pandemic. Unlike last year, for him, Pace Night 2021 felt the way it should and always has prior to the pandemic.

“You definitely feel that energy that you didn’t feel last year,” said Lisa. “Driving in, I saw people in the parking lot for the [monster] truck thing [at MetLife Stadium as well as the races] and it’s like, wow, it’s back to normal. Everybody was out, it was great. I’m sure if we had better weather here this place would be packed.”

The skies really opened up for the sixth race, which was poor since it was the first of the four shown live on Fox Sports 2.

The rain did let up for the start of The Pace, and fans, including the Governor of New Jersey, Phil Murphy, who presented the trophy to the winner, chose to watch the race outside, but by the half the rain was pouring down again.

Perhaps the one saving grace for the night was that the lightning was never bad enough to cause any race delays.

There’s no question that the weather affected the attendance of 6,421, second lowest in Pace history. However, bettors still supported the Pace and the entire card.

Total handle for the night was $4,503,213, marking the second time the Pace Night handle exceeded the $4.5-million mark in the last 13 years. While wagering on the Pace itself was $677,992, the highest handle for the race in the past decade.