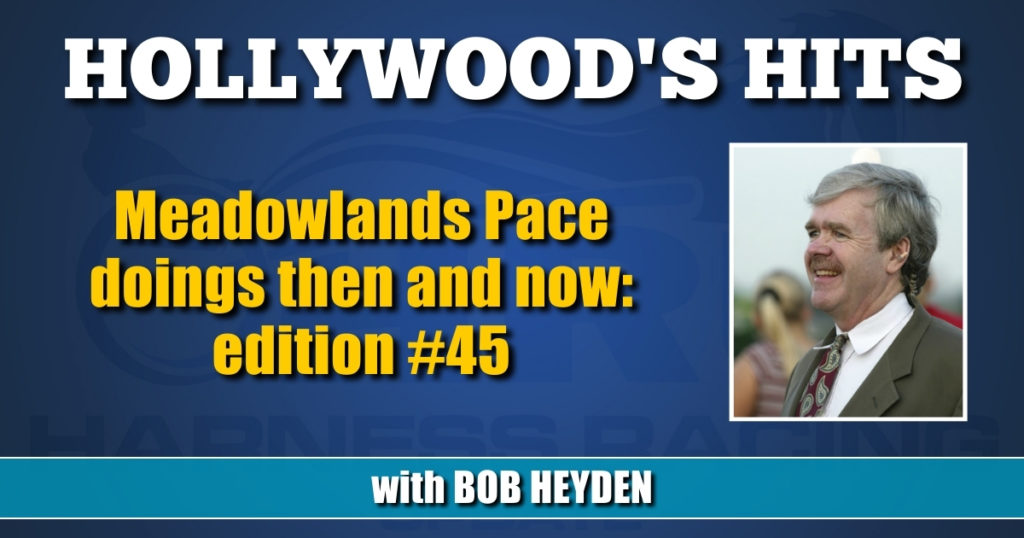 1. George Segal debuted in the Meadowlands Pace in 1978 finishing fourth with Brittany Rd. Marty Granoff was also fourth in the 1986 Pace with free-legged Masquerade, who would later capture the Breeders Crown at Garden State Park. Segal and Granoff combined their efforts in 1998 with a nose defeat with Fit For Life. Now, they are looking for collective glory Saturday (July 17) with the likely post time favorite Perfect Sting in the 45th edition of the Meadowlands Pace.

4 Greatest Pace field top to bottom? I vote for 2012. A Rocknroll Dance gave Yannick Gingras his first Pace. Pet Rock was a world record holder when all was said and done. All Star Legend rocketed from the outside post early to just miss holding on for second. Fourth through 10th included: Sweet Lou, who earned over $3.4 million lifetime and still owns the 5/8ths world record of 1:47; Bolt The Duer was a late finisher in the Pace who set the Adios world standard of 1:47.4 that year; Heston Blue Chip wound up the division winner with a 1:48 flat mark on the 5/8ths; Simply Business won the $1,020,000 Metro the year before; State Treasurer went on to a fabulous career which included a season’s best 1:47; Time To Roll wound up nearing seven figures in earnings and has been a solid sire alongside brothers Tellitlikeitis and Rockin Image and Rockin Amadeus; Thinking Out Loud won the $1,470,000 North America Cup and later a Breeders Crown.

5. David Miller is looking for Pace win #2. He was already in the Hall Of Fame when he won it with Courtly Choice in 2018. Linda Toscano’s Hall of Fame acceptance speech came six days before she too broke through in the 2019 Pace with Best In Show. Perfect Sting’s trainer Joe Holloway looks to follow that trend in 2021.

6. Very sweet 16 with Yannick Gingras and George Teague likely Hall of Fame bound in 2022 that means that now the last 16 Meadowlands Pace finals have been captured by either a Hall Of Fame driver, Hall of Fame trainer or both from 2005-2020. The record for any is 25 — 1959-1983 in the Hambletonian. Overall, 34 of 44 Pace finals have had a winning driver in the Hall and 12 of 44 a Hall of Fame conditioner.

7. Matt Kakaley will start American Courage from Post 10. Don’t be too quick to dismiss. It was just three years ago that this very same thing happened and the longshot Dorsudoro Hanover took a tuck fifth, went first over and held dead game for second — and wound up the division winner. Remember that both elims for the 2021 Meadowlands Pace were won by the outside post 7.

8. Charlie May, Chase H Hanover and Southwind Gendry are all geldings. Good history to look at here in the Pace. Geldings have held their own. Holborn Hanover at 58-1 in 2004 is the longest-priced winner. Gallo Blue Chip in 2000 went on to the single-season money record of over $2.4 million greatly aided by the winner’s share of $1,150,000 (P B Bullville had supplemented for $150,000 but did not get out of the elims). One More Laugh set the all-time 3YOGP mark of 1:47.4 in 2010 nipping Horse of the Year (HOY) Rock N Roll Heaven on the money. Wiggle It Jiggleit was HOY in 2015 and the last pacer to post a $2 million season which included a Pace victory. Hot Lead in 1996 held on in the Pace and won the division title in George Brennan’s Pace debut.

10. Tim Tetrick looks for Pace #6 with One Eight Hundred; Nancy Takter for her second straight. If this colt wins it would give the women three straight Pace wins as Linda Toscano upset in 2019 with Best In Show at 27-1.

11. Somebeachsomewhere edged Shadow Play in the 2008 Messenger. Thirteen years later their sons will go at it in the 45th edition of the Meadowlands Pace — One Eight Hundred a son of 2008 HOY SBSW and Lawless Shadow a son of Shadow Play trained by Dr. Ian Moore, who also campaigned Shadow Play.

12. Abuckabett Hanover was sired by Betting Line, the 2016 sophomore pacing colt of the year and the first ever to have not competed at all at the Meadowlands during that award-winning season.

15. SBSW and Muscle Hill, despite their complete dominance on major race cards the past seven-eight years, have never sired a Horse of the Year — neither one.

18. Always B Miki and SBSW are the two Horse of the Year sires represented in the 2021 Meadowlands Pace field.

19. Mark MacDonald (Lawless Shadow) holds the unusual distinction of having the fastest mile of the year in harness racing — 15 years apart. He did it first in 2005 with American Ideal and again in 2020 with Hurricane Emperor.

Thirty-five years ago this week at the 1986 Meadowlands Pace press conference in Pegasus at the Meadowlands, Stan Bergstein announced that the harness racing world had just lost Billy Haughton at the age of 62. Though it was expected by then — his accident at Yonkers had occurred 12 days prior — nothing could prepare you for news like that.

We certainly could have benefitted from another 20-25 years from this man like no other. Just two years removed from yielding the drive on Nihilator in the richest race ever held, I always wonder how Billy would have handled the great filly/mare Peace Corps, who was born that year (1986). She was bred by Stanley Dancer and was a star for Haughton’s son Tommy before heading overseas.

Billy was a presence with a capital P, and the last quarter of his life should have been spent telling us all about it — all the while still looking for that next champion.