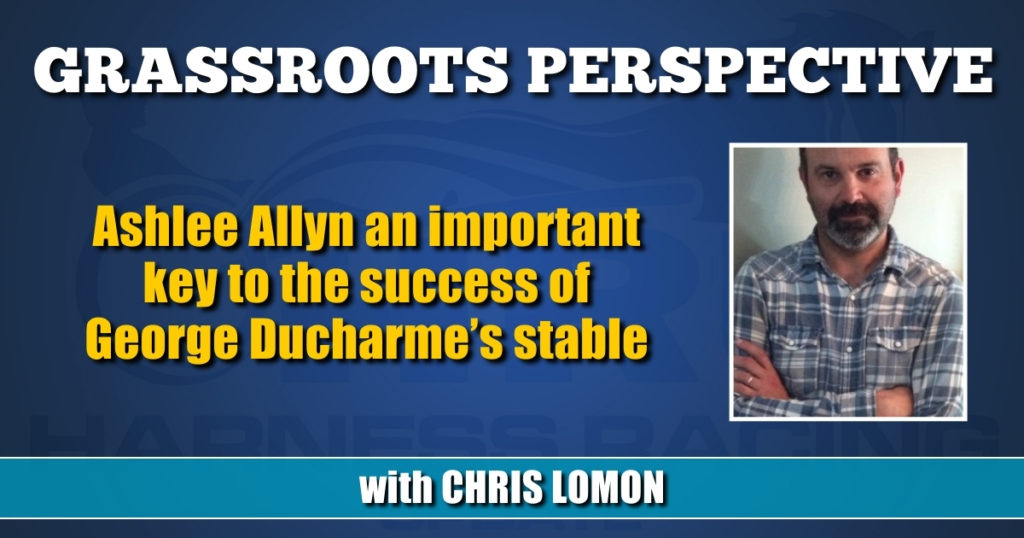 For Ashlee Allyn, it’s all about a smooth operation.

Ask the horsewoman from Warren Center, PA, what her role in the George Ducharme barn is, and she is somewhat hesitant, at least initially, in her response.

It’s quite understandable for someone who is happy to fly under the radar.

“I’ve been working for George for nine years,” said Allyn. “I’m the operations manager or barn manager for the entire stable. I deal with all the day-to-day operations with the whole barn, while I still have a small string of horses to take care of. I make sure all the other grooms have what they need, communicate with the vet and blacksmith, order supplies and feed, and to the best of my abilities, make sure everything runs smoothly every day.”

Allyn has been part of the standardbred world since 2006, the year she started as a groom at Tioga Downs.

Her connection with the sport, however, dates back much further.

“My great grandfather, Mike Haight, drove and trained. I grew up looking at his win pictures that went back to the 1950s and ‘60s up until the early ‘80s. Nobody in my family was involved in harness racing or with horses, but when I was about nine or 10, I started riding horses. I grew up on a dairy farm, so I was around animals, but I really started to gravitate towards horses the older I got.

“The year Tioga opened was the year I graduated high school. That’s where I got my first job because my mom was getting tired of taking care of my horses. So, I started working there. The first few years of being a groom, I would work in the summertime and then go to college in the fall and the winner. When Tioga would open again, I’d work for whoever needed help at the time. I went to school for graphic design, but that didn’t really work out.”

A successful and rewarding career, at the racetrack and in the barns, did pan out.

Since 2012, Allyn has worked for Ducharme, a veteran trainer who is closing in on 1,000 career wins.

Her job might best be described as a little bit of everything, none of it boring, most of it interesting, all of it rewarding.

“I guess I do the stuff that George doesn’t want to do, which is fine with me. I was training for him a few years, and we had around 30 or 40 horses. I was doing all the barn stuff, plus the training and shipping. It got a little too hectic for me. I’d rather stay in the barn and be with the horses.”

It’s something Allyn, who typically has handful or so of horses under her care, looks forward to every morning.

“Having a smaller number of horses to look after is so much more manageable and most importantly, you can really give them the individual attention they deserve. I like being organized and making sure everything is done correctly, so that makes me happy. I like having the training schedules down pat and everything flowing properly. Taking care of the horses is the best part of my day. We have a lot of babies, so that’s always fun. Watching them mature, qualify and then race is a huge thrill, to see that development over time. You love seeing them live up to their full potential.”

Throughout the years, there have been several horses she’s developed a close bond with, many of them pacers or trotters with a big personalities and hard-nosed reputations.

And that suits Allyn just fine.

“I get assigned the horses that nobody else seems to get along with,” she said with a laugh. “I don’t know why, but I like working with temperamental fillies.”

Fortune Starlet would be a prime example of such a horse.

Bred by Deo Volente Farms LLC (NJ), the daughter of Trixton was a handful, to say the least.

On the track, Fortune Starlet was a tough-as-nails trotting talent who often took on top-tier competition.

Her biggest win came on July 12, 2019, at The Meadowlands, a five-length romp in the New Jersey Sires Stakes 2-year-old fillies final.

A knee chip temporarily sent her to the sidelines, but her demeanor remained unchanged.

“When she was 2, she came to us with a bunch of warnings. When George went to Lexington [in 2018] to look at her, the kids who were showing him said, ‘Stay back. She kicks and she’s really mean.’ After hearing that, George wasn’t convinced that he wanted her. Bill Donovan, who bought her, went up to George and said, ‘Here you go… you’re training her.’ That was the first time I heard about her, way before I ever met her. And sure enough, she was really, really difficult. I had no problems breaking her, but she had her moments. You couldn’t walk in the stall without giving her a warning.

“I had cones around the stall so people wouldn’t walk near her. I put her away when no one was around because that was when she was the most pleasant. It was just me and her. She was a great racehorse. After that chip in her knee, she came back and raced well. She took on a lot of big stars, horses like Sorella and Ramona Hill, but she always held her own. And she was just as nasty when she was three. Now, she’s a broodmare. I am so happy that I was able to be a part of her career.”

Allyn can take solace in knowing she has another feisty filly, Contested Hanover, to take care of.

It’s more than enough to put a smile on her face.

“It’s fun. It’s a challenge and I enjoy it. I have a 2-year-old Muscle Hill filly who has that strong-willed personality too. My job is to keep them happy and help them be ready for whenever they race.”

As for what keeps Allyn happy away from the races, the great outdoors and a sound sleep top her list.

“Well, I take a lot of naps. The biggest time to relax is going to Florida. Usually, I get a group of homebreds to break around the end of October. My boyfriend, Frank, and I go to Florida and get the barn set up for the rest of the babies that come in. We get them broke and around Thanksgiving I get two weeks of vacation. I usually go somewhere where I can go hiking, like a national park. If I’m not napping, I love being out in nature.”

She also loves her job.

“I’m proud of my work ethic. I don’t want it to sound as though I’m being conceited, but I work hard to get the results we aim for. I can be hard on myself, but I like hard work and grinding away at it. There’s nothing more rewarding to see our barn have success.”