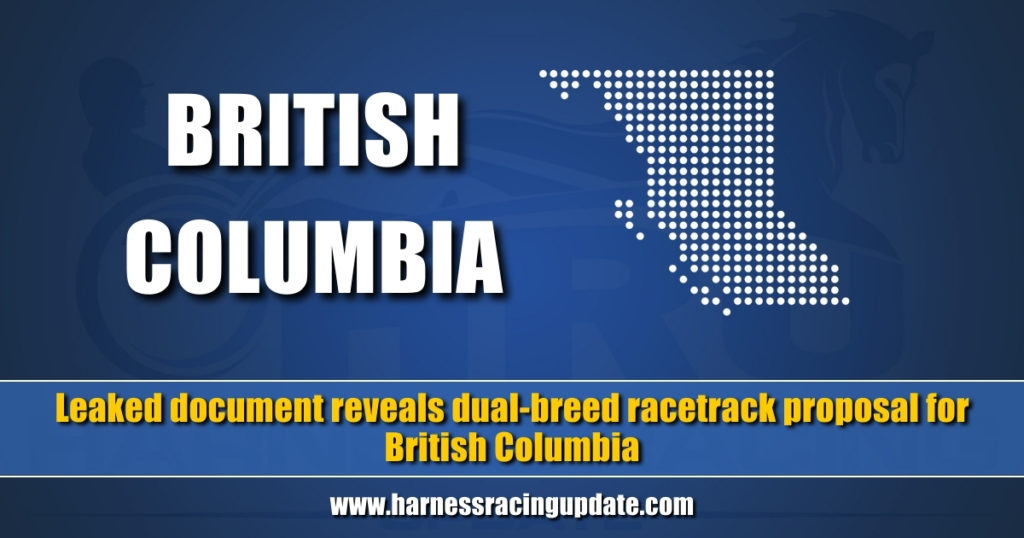 If approved, the new track would replace both Fraser Downs and Hastings Park in the “Horse Capital of BC.”

Langley Township, British Columbia wants to become home to one of Canada’s newest racetracks, leaving the futures of two historic racing venues up in the air. That’s if a proposal for a facility in the eastern area of Metro Vancouver meets approval.

A document anonymously shared with the Langley Advance Times news outlet revealed that Langley Township reached out to the BC Horse Racing Industry Management Committee (BCHRIMC) in a letter dated June 21, 2021. Mayor Jack Froese has since confirmed to local reporter Matthew Claxton that discussions are at an early stage.

The leaked letter references a “special closed meeting” of the Township of Langley Council that took place on July 27, 2020. In that session, a resolution was passed that would see Council direct municipal staff to advise the provincial government and BC Lottery Corporation (BCLC) that Langley Township was “willing to become a Host Local Government (HLG) of a casino, community gaming centre or teletheatre, in partnership with Kwantlen First Nation (KFN).”

In BC, host local governments receive 10 per cent of net gaming revenue from approved gaming venues located within their boundaries. The funds may be used as the host local government wishes, and must be reported annually to the provincial gaming policy and enforcement branch.

The letter states that council would “like to explore the relocation of the two major racetracks, both thoroughbred and standardbred, to a new, one-mile, all-weather racetrack and training centre to be established on agricultural land” in the “Horse Capital of BC.” The proposal includes an on-site racebook. When permitted, an unspecified “ancillary gaming facility” would be added. There is currently no casino in Langley Township.

A “Sunny Riding Stables” sign stands in front of the vacant land earmarked for the project.

Council staff were directed to inform the BCHRIMC that the municipality wished to start consultations with racing industry representatives, including “various stakeholder groups,” plus Great Canadian Gaming Corporation (GCGC), other BC gaming operators, and “operators of both Hastings Racecourse Casino and Fraser Downs at Elements Casino Surrey.”

Hastings Racecourse opened in 1889 at what is now known as the Pacific National Exhibition (PNE) grounds in Vancouver. The PNE is a non-profit organization that holds a summer fair, a tradition that began in 1910. Horse racing pre-dates the fair: The provincial government granted 160 acres of land to Vancouver City Council in 1888, for public use and recreation; a group approached Council about allocating a portion of the land for racing. Sixteen acres were leased to the newly-created BC Jockey Club in 1890. In the 1950s-60s, Hastings was upgraded with a larger racing surface, new grandstand, and lights for nighttime racing. It is one of GCGC’s nine BC gaming properties.

Fraser Downs stopped racing ahead of schedule on April 17, 2021, when Harness Racing BC (HRBC) ran out of funds. Lengthy casino closures due to COVID-19 precautions had hit racing hard. Twenty-five per cent of net slot machine profits at Fraser and Hastings are allocated to supporting live racing in BC.

Nearly a decade ago to this month, rumours circulated that Hastings would be moving thoroughbred racing to Fraser Downs, which in turn would be renovated to host both breeds. A July 25, 2012 Chilliwack Progress article by reporter Jeff Nagle pointed out that if Hastings Park renewed its lease to remain at the PNE, a deal to consolidate BC thoroughbred and standardbred racing at Fraser Downs would be dropped.

In January 2020, Hastings Racecourse and the City of Vancouver signed a new five-year lease extension with a five-year option in place. This year, both tracks continue to operate separately under GCGC ownership. Hastings’ meet is underway now, with racing tentatively slated to continue through October 25.

In a release on its website Saturday (July 10), Harness Racing BC (HRBC) noted that the reopened casinos at provincial racetracks were performing “better than expected,” which is good news for racing. Fraser Downs is now tentatively scheduled to start its new season “sometime during the week of September 20, 2021,” with one weekly live card for the first four weeks of the meet, followed by two cards per week if horse population is sufficient.

The HRBC site mentions Hastings and Fraser racebook reconfigurations being discussed with GCGC, but there is no mention (yet) of the breaking news out of Langley Township. A possible merger of all BC racing at one new track is far from assured, although Langley Township Mayor Froese stated in the leaked letter that he “looks forward to discussing this proposal further.”