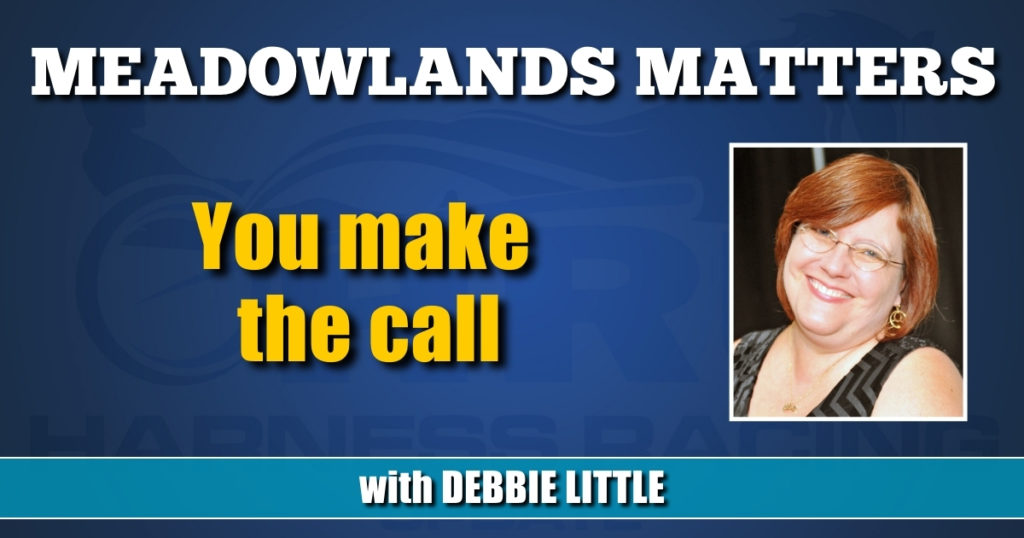 You make the call

The Meadowlands-sponsored race announcers workshop started in the 1990s and even though it’s gone through some changes over time, two things remain the same: its popularity and Ken Warkentin.

Saturday morning (July 10), Warkentin, the voice of The Big M, will once again share his trade secrets with a bunch of eager wannabes.

“My first thought was, I don’t expect there to be much interest, I always think that, and then [Matt Zuccarello] gets 15 people,” said Warkentin.

Zuccarello attended the workshop in 2017 and when it wasn’t planned the following year, he took it upon himself to help organize it in 2019.

“I decided as a fan and amateur driver that I wanted to continue this and, hopefully, we’ll be able to do it for many more years,” said Zuccarello. “This is the second one that I’ve been in charge of coordinating in the past three years.”

The organizers are fortunate enough to have 15 qualifiers on Saturday, but if they end up with more participants than races, all of the names will go into a hat and the lucky ones will get to call over the public address system.

The prospect of calling a race at the top track in the sport is exciting to all attendees, many of whom have practiced doing it.

“I’ve been around the game since the early ‘70s,” said Robert Jolly. “I used to call the races on my way to Roosevelt and Yonkers.”

Casey Moore, who’ll be driving down from central New York, heard about the workshop on The Meadowlands simulcast show.

“I’ve always had a passion for sports broadcasting,” said Moore. “Often finding myself muting the races and calling them on the fly, so any opportunity to hone my skills with a living legend, is one I simply cannot pass up.”

Robert Pugliese, who lives a few miles from The Meadowlands, decided to attend after reading about it in the Paulick Report.

“I have been a horse racing fan since I was a teenager,” said Pugliese. “As a kid, I remember watching the Kentucky Derby on TV and mimicking Dave Johnson’s “and down the stretch they come” call every year. I thought it would be fun to learn what goes into calling a race and maybe trying it myself.”

New Jersey resident Bob Fidanza owns horses with Zuccarello, who told him about the workshop.

“I enjoy all aspects of the racing game and meeting others who share that interest,” said Fidanza.

For horseman Michael Hinkley, calling a race is on his bucket list.

“I owned and trained in the 80s and always enjoyed all the race callers, so I thought it would be fun to see and learn from one of the best,” said Hinkley.

Chris Daggett became a harness fan in the early ‘90s when his parents were part owners of a few horses.

“So, growing up, I remember announcers like John Bothe, of course Ken Warkentin, Roger Huston and even the Meadowlands racing secretary Scotty Warren, when he used to announce at Rosecroft,” said Daggett. “I’ve always loved to pretend to call races whether I was at the track or recalling old races with friends. Never thought I’d have a chance to actually give it a shot, so I jumped at the opportunity and I’m blessed to be bringing my dad [Dave] with me as well.”

Teacher Andrew Blasenak will be up early driving in from Havertown, PA, west of Philadelphia.

“I’m interested in doing the workshop because I really love the sport of harness racing and I have a strong theatrical background,” said Blasenak. “I got a taste of calling a race three years ago on a hot, hot Fourth of July at the Saratoga Harness track. I had to [recreate] the race to my parents (who ducked indoors to obstructed-view seats in the air-conditioned bar area), and it helped me key into the race and every moment of the action as I told them what was going on, so I thought it might be fun to try it at The Big M.”

Thomas Kearney, from Silver Spring, MD might win for longest drive at just under 3½ hours.

“I heard about this workshop through social media after I was hired as the track announcer at Shenandoah Downs in Virginia,” said Kearney. “I had filled in for Pete Medhurst at Rosecroft Raceway in 2017, so I figured this workshop could serve as a refresher for calling harness races, which I last did in 2017.”

Even though Zuccarello has done the workshop before and has called a few qualifiers, he still looks forward to his next chance to call.

“It’s one of my dream jobs,” he said. “I’ve been announcing since I was a little kid [maybe seven or eight years old]. I found a couple of the cassettes recently.”

Since the workshop starts at 8 a.m., it’ll be a long day for Warkentin, but that’s fine with him because he enjoys giving the class a look behind the curtain.

“It introduces people to the other side of how we process racing,” said Warkentin. “That’s what we do, we process racing. We’re telling people what happened. The bottom line about this is, it’s just a fun time and the money goes to charity.”

All workshop attendees pay a $25 participation fee, which is donated to the Harness Horse Youth Foundation and even though no one actually believes that attending one workshop or possibly calling one race would lead to a job offer, it’s certainly a start and you never know what the future holds.

“I told them to bring their enthusiasm and a check and we’ll go from there,” said Zuccarello.

What’s that expression? $25 and a dream.