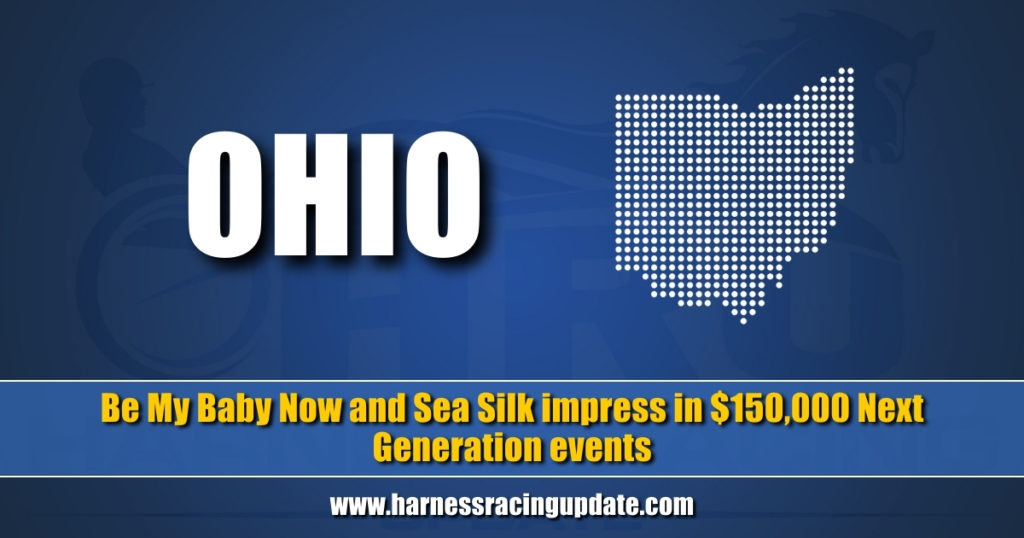 Be My Baby Now and Sea Silk impress in $150,000 Next Generation events

Owners Burke Racing Stable, Weaver Bruscemi, Knox Services and Hatfield Stables had a great couple of nights last weekend in the Next Generation events at Eldorado Scioto Downs. The veteran ownership group won a pair of $150,000 events for Ohio bred 2-year-old fillies with trotter Be My Baby Now and pacer Sea Silk.

In Friday’s (July 2) inaugural filly trotting test, the What The Hill–Baby Bella filly made her first career start a winning won with a length-and-a-half score in 1:57.4.

Driver Chris Page sat patiently in fourth through much of the race, sending the winner three-wide in the final turn to outsprint Reichers Caviar (Aaron Merriman) and Moments Created (Kurt Sugg) to the wire.

“Be My Baby Now didn’t seem as impressive as Sea Silk but I think that’s her style,” said co-owner Mark Weaver. “She’s all business and will do whatever Chris asks of her, nothing less and nothing more.”

On Saturday night (July 3), the pacers took center stage and Sea Silk had the Eldorado Scioto Downs fans buzzing with her 4 ¾ length romp and 1:51.3 track record effort in the filly pace.

Page once again eased his mount off the gates wings, taking the lead before the three-quarter mile station and drew off from Secret Side Place (Trevor Smith) and the pace-setting Dragon’s Revenge (Dan Noble). She paced her final quarter in :27.3 to secure her first win.

The Downbytheseaside—Silk Purse lass was made the bettor’s top choice after a pair of qualifying wins at The Meadows — both miles were timed in 1:58.3.

“We have another filly, Seaside Park, that was better than her all along but she got hurt. So, knowing we were going in with our ‘B’ team I was a little worried. We may have to reevaluate our rankings.”

Nine of the 10 money-earners in the pace events were by Downbytheseaside or Fear The Dragon, both first year Ohio stallions.

The Next Generation required a $10,000 nomination fee paid on March 15 to claim a spot in the nine-horse fields.

“The Next Generation was just the cherry on top. It is such a unique race with the purse so big for being so early in their careers,” said Weaver.

Ironically, both Burke Brigade Next Generation champions were $47,000 yearling purchases at the 2020 Ohio Select Sale – Be My Baby Now from the Stephanie Smith-Rothtaug consignment and Sea Silk from the Steiner Stock Farm offerings.

Be My Baby Now and Sea Silk will not have much time to rest as the first leg of the Ohio Sire Stakes (OHSS) will be held this weekend.

The trotters will return to Eldorado Scioto Downs tonight (July 9), while the pacers will head to MGM Northfield Park’s “Flying Turns’ on Saturday (July 10).

Trainer Ron Burke will send out 25 freshmen into OHSS action over the two nights — nine on Friday and 16 Saturday evening.

“As for the other ones in the sire stakes, at this point they’re hard to separate. For the most part we went with our best in the Next Gen but there are some that were very close,” said Weaver. “We have a very deep group this year. Almost all of them we felt were worthy of going in the sire stakes in the initial leg rather than the Buckeye (Stallion Series).”

Weaver is not only high on his chances this weekend; he is also very high on the future of Ohio racing.

“The Ohio program doesn’t take a backseat to anyone. We have quite a few Ohio breds that we’re very excited about and most will be in action this weekend. With the new stallions in the state, it wouldn’t surprise me to see Ohio breds as players in the Grand Circuit races.”