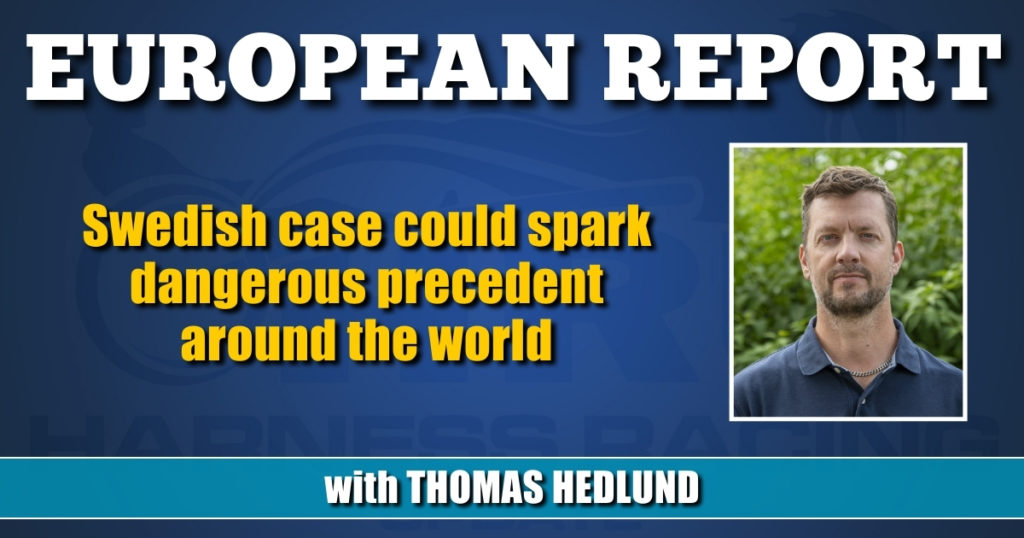 Swedish case could spark dangerous precedent around the world

On Tuesday, a Swedish trainer was handed a one-year ban from using a whip by the municipality where he lives, not the sport’s governing body Svensk Travsport which has aggressively punished those that violate its whipping rules.

Swedish trainer/driver Joakim Lövgren is at the center of a unique case that some worry could set a dangerous precedent for harness racing around the world. On Tuesday (July 6), the municipality where Lövgren lives — not the sport’s governing body, Svensk Travsport (ST) — handed him a one-year ban from using the whip anywhere in Sweden.

Lövgren — a man who won the 2011 Elitloppet with Brioni and has more than 1,400 career wins as a driver and over 1,500 as a trainer — was given the punishment by the county administrative board for jurisdiction of Skåne, near Malmö in the southern part of Sweden. The region is home to Jägersro racetrack.

The case stems from an incident in April when Lövgren was fined ($420) and suspended for 10 days after racing his horse Piccadilly at Jägersro. The twist is that the fine and suspension came not from the judges, but rather, after a report was filed by the veterinarians working in the stable collecting blood samples to be tested for doping. The vets noticed marks on Piccadilly’s body consistent with those caused by a whip. Rules say that a veterinarian must report cases like this to the county board in the region where the races are held.

In its decision, the board wrote the following to Lövgren (translated into English using Google Translate):

“You have intentionally inflicted unnecessary physical and mental suffering on an animal in order to win a competition and money.

“The County Administrative Board has considered notifying you of an animal ban because you have seriously breached the supervision and care of a horse and because what happened falls under the abuse of animals. However, in light of the circumstances of the case, the County Administrative Board considers that such a decision could be disproportionate and that a less intrusive decision may be sufficient to ensure that what has happened is not repeated.”

It should be noted that Sweden has some of the toughest whipping regulations in the world and ST has been known to aggressively punish those it feels have misused the whip. So much so that recent questionable whipping penalties handed to French drivers led those horsemen to boycott racing in this year’s Elitloppet (full story here).

Similar cases to Lövgren’s have previously been processed differently in Sweden. If a county board has had complaints about drivers using their whips in an inappropriate way, cases have been handed over to a civil prosecutor for judgement and fines have been the most common penalty.

Taking the whip out of Lövgren’s hand entirely for a full year is particularly harsh because it would put him at a competitive disadvantage, especially since he regularly drives the horses he trains.

The whip can also be an important safety tool to have in one’s hand. It can help drivers prevent accidents when horses break or fall suddenly.

While there is no doubt animal welfare is critical to the sport’s survival, this case marks a dangerous precedent of a municipality stepping in to impose whipping penalties, particularly when ST has proven to be more than up to the challenge.

As animal welfare issues rightly become more of a societal focus, the worry is this will be just the first of many cases where local governments around the world begin stepping in to impose their own punishments in horse racing cases.