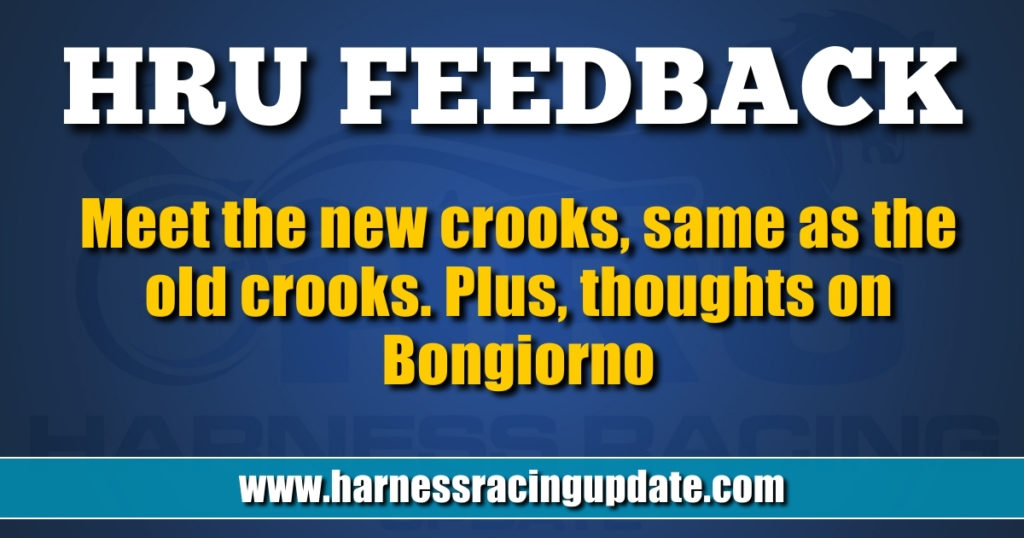 It’s risky business to comment on any driver’s style in the bike. Bongiono’s style has no doubt caught the eye of enthusiasts along the bettors’ apron and fellow drivers hoof beats away at the eighth pole. Different strokes for different folks, right? While his eye-catching dramatic style in the bike breaks the norm, it has worked. And he’s not alone in history with that style. Take J C Miller of The Meadows fame (where David Miller and Brian Sears were notable fixtures at the time). It was on more than one occasion track analyst Jerry Erenstein would calmly say: JC threw everything at him but the kitchen sink. And what about Hall of Famer jiggling Joe O’Brien who was no statue in the bike? And anyone willing to make the effort, view clips of Joe B and George Nap in the bike: not much difference. Twenty days (suspension). A bit much in my opinion. Nothing accomplished there that a conversation couldn’t have done, and probably more effectively.

Meet the new crooks, same as the old crooks

Well, if the betting public has learned one thing it’s that the industry keeps hiring the same type of low IQ, do it like it’s always been done oversite/officiating. Growing up near both Detroit Race Course and Hazel Park Race Course I believe I’ve experienced pretty much all ways of cheating. Both of these tracks are gone now and the reason? The old bettors got fed up with the same old “unable-to-win BS day in and day out” and the biggest factor of all, the inability to recruit new-replacement suckers.

Fast forward to today, the number of tracks remaining has shrunk to just a handful and with new government intervention the remaining racinos are being allowed to decouple the track from their key business. It’s almost comical to watch the remaining key tracks toot their horns about the record amount of their handle as though they were the key reason responsible and not the fact that 100’s of tracks have closed and the remaining bettors have been forced to wager through the tracks still open. What is not being admitted is that the COVID-19 virus outbreak and pleasure-related businesses closings has artificially propped-up the remaining forms of entertainment like online betting at racetracks. Now with sports betting pushing its way into all market domains and the re-opening of other business competitors the amount of horn-tooting by the larger tracks will likely recede to a whimper.

Now “The Rest of The Story”. During the past year, the bad guys have refined their cheating strategy after having been caught using performance enhancing drugs. They have gone back to the aforementioned old way, selective finishing, with track announcers giddy over longshot finishing and tracks using the resultant giant pay-offs in exotic wagers like pic’s 3-4-5 so as to prop up future wagering, it’s no wonder the average bettor has become more of a “mark” than ever before. So ask yourself if your being served by current judging, oversite and racing commissions. After-all, if we see it, they see it.

Think the multi-million dollar tracks and sports complexes are on your side? Look at the response from a certain mega-track in the East when questioned about “Fixed Odds” wagering: We’ll have to look into it. Here’s one possible reason for this response and yes this includes the track in the East:

• The way the game is played today has to do with total amount of dollars wagered, the amount deducted by the track out of each dollar wagered is somewhere between 15 per cent and 28 per cent, this is referred to as the hold and the norm is about 24% per cent. Here’s the game, a smart bettor knows that if a horse is heads and shoulders above all others and leaves the gate at even money chances are good he would return $2,40-$2.60 to place but if the same horse is 1-2 or 1-5 or shorter he’s going to pay $2.10/$2.10/$2.10. So it appears to me that the tracks are holding the last data dump containing the true odds for an extra amount of time in-order to induce a wager under the premises that we’re betting on the even money horse not the 1-5 odds. The fact that the racing commission hasn’t caught this is troubling.

• Dragging post off times has reached new lows at a number of tracks like Monticello where times are routinely dragged for 4-5 minutes. I also see this track seems to have an inordinate amount of favorites back up through the field while there is no mention of any actions taken as a follow-up on their website. I see that the advertised payoff’s for exotic bets often exceeds the total wagered pool, in my opinion this is unacceptable and misleading, therefore borderline illegal . I believe every track has an on-site racing commission official so what does this official do?

• Today’s game has way to many negatives and can’t seem to grasp that the customer of 2021 ain’t gonna be satisfied with how this product stacks up against the competition. And, when half the time we see favorites fading one week only to thunder back the following week while a 7th, 8th or 9th place horse suddenly finds two seconds and wins at 25-1 — this deserves an answer. It seems that nobody wants to rock the gravy train. How many times this year have you heard the announcer claim the winning horse just won with a time the best in two years.

• Well the roadmap has been in their faces for a few years now and yet they have refused to fix the road. For some naive reason track management believes its customers are into picking winning horses. No, no, NO we’re into winning a profit, we don’t have to pick the winner, just a win a bet that’s profitable. Apparently common sense has left the boardroom.