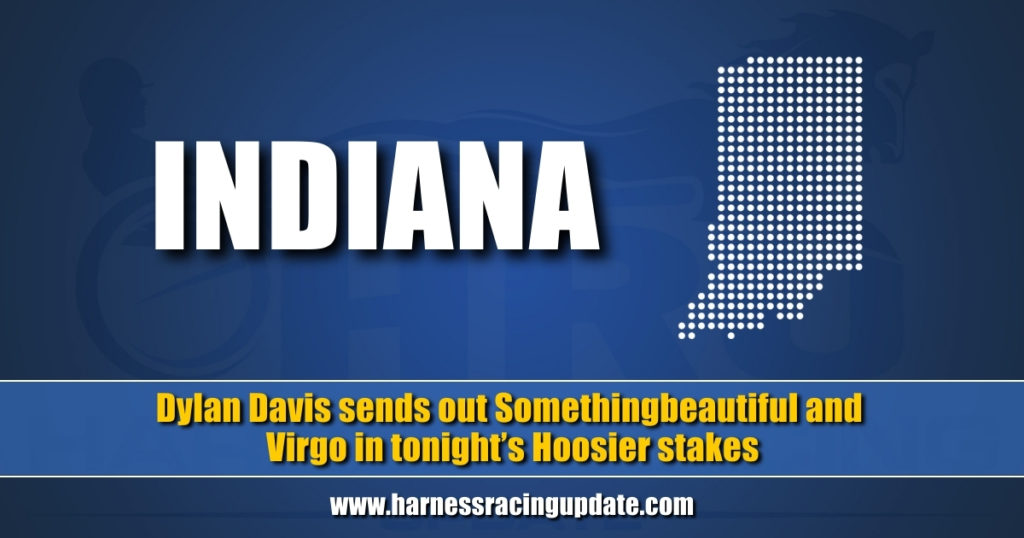 The trainer will contest the $110,000 Nadia Lobell with Somethingbeautiful and the Hoosier Cup with Virgo at Harrah’s Hoosier Park.

Harrah’s Hoosier Park plays host to the first of several 2021 open stakes tonight (July 4), with the potential for fireworks in two events on the program. The $110,000 Nadia Lobell for sophomore pacing fillies is paired with the $75,000 Hoosier Cup, an event for Indiana-sired 3-year-old colt pacers. Trainer Dylan Davis will send out Somethingbeautiful in the Nadia Lobell and Virgo in the Hoosier Cup.

The Nadia Lobell, carded as race five, has attracted a tough group of six pacing fillies, led by morning line favorite Hot Mess Express. She is undefeated for trainer Tony Alagna, a perfect four-for-four. Last season, Somethingbeautiful bested Hot Mess Express in Indiana Sires Stakes action. The Always A Virgin-Summer N Sand lass won eight of 11 seasonal starts, including the $270,000 Super Final. She finished the year with $312,000 in earnings and was named Indiana Pacer of the Year. Her only miscue in 2020 came in the $600,000 Breeders Crown final for freshman pacing fillies. She broke stride in the stretch while racing third and finished eighth.

This season, Somethingbeautiful has recorded a second and third-place finish in three outings, each time facing Hot Mess Express. In her debut, the opening leg of Indiana Sires Stakes, the filly broke stride before the start but rallied back to finish second in 1:51.3. In the second leg she led through a blistering half before fading to sixth late. Her last time out, she came from off the pace to finish third. Although the sophomore has yet to score a victory, Davis is pleased with how she has returned in 2021.

“I think, personally, she’s been racing great. Her first start back she made a little miscue behind the gate, spotted the field six or seven lengths and finished second. The following week she went to the half in :53 with Hot Mess Express sitting behind her. That pretty much explains itself,” said the trainer. “Last week she got away last and ended up first over from last. I think she was off eight at the half and got beat three. I think the filly is just as good as she was last year. Obviously, Hot Mess Express is a little better than she was last year. I’m not disappointed in my filly at all.”

Bred by Aaron Stutzman and owned by the partnership of Howard Taylor, Edwin Gold, Abraham Basen and Richard Lombardo, Somethingbeautiful has drawn the rail for the Nadia Lobell. She is 15-1 on the morning line, the longest shot in a field that also includes Continualou, Grace Hill, Summer Touch and Blue Diamond Eyes. LeWayne Miller, who has steered Somethingbeautiful in two of her three seasonal starts, is again in the bike.

“She’s going to race. They’re going to know she’s there,” said Davis. “I don’t plan on getting away eight or nine lengths back this time. She’ll definitely take advantage of the rail.”

Davis will send out Virgo in the night’s ninth race, the $75,000 Hoosier Cup. The gelded son of Always A Virgin—Star Of The Show was pulled up and did not finish his 3-year-old debut in May, but has since returned to collect a win and runner-up finish in back-to-back efforts with Trace Tetrick at the controls.

“He had a health issue. He had a little issue with his heart. We had to get that fixed,” said Davis, who also co-owns the pacer with Taylor and Jeffrey Billings. “He’s come back as good as ever. Actually, I think he’s a little bit along the lines of Hot Mess Express. I think he’s a little better this year than last year.”

A $13,000 yearling purchase, Virgo earned a 3-3-1 record last season in nine trips behind the starting gate. Bred by Dustin Miller, the Indiana product earned just over $125,000 last season under careful management due to his propensity to get hot if sent to the lead. Davis said the gelding has a tendency to self-destruct, but this year has shown to be more usable in racing situations.

“He’s definitely more mature and more usable. Last year, you had to be really careful with him. He’d get really hot,” said Davis. “This year he seems to be a lot more mature. Obviously, we’re still going to take it easy with him as far as racing him aggressively. He’ll do most of his racing from the back I’m guessing, unless Trace gets confident enough in him that he can start him early. That’s the problem we had last year, if you started him early, there was no slowing down.”

Virgo enters the Hoosier Cup after an impressive four-length triumph in one of three eliminations last Sunday, June 27. In that contest, Tetrick left the gate fifth and moved to the lead after the half. The duo then kicked home in :26.1 to trip the timer in 1:50, a new lifetime mark for the sophomore. Drawing post seven in the field of 10, Virgo is the 3-1 second choice on the morning line behind favored Rockin On Venus.

Somethingbeautiful and Virgo will be fixtures in Indiana Sires Stakes this summer, and Davis said they are both eligible to the open stakes at Hoosier Park, as well as the Breeders Crown in the fall. Last year, they were two of the top freshmen in the state, and the trainer is hoping for another great season from the pair.

“I don’t know if she improved as much as Virgo has, but I’m really looking for a great year out of both of them again,” he said. “They both seem to be very healthy, and mentally, they’re where I need them.”