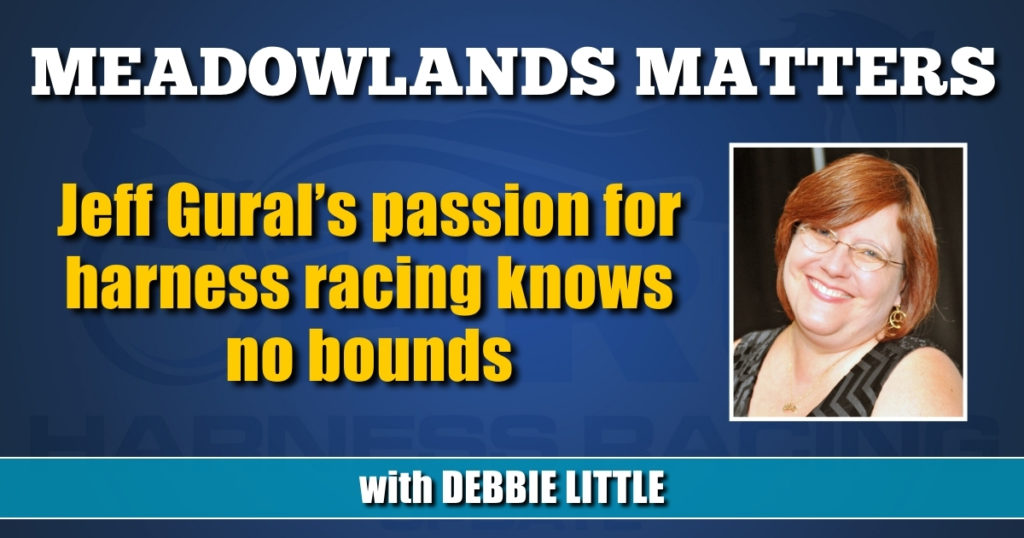 As Jeff Gural prepares for his official induction into the Hall of Fame on Sunday, he said he would like to be remembered for saving The Meadowlands racetrack and trying to rid the sport of drugs.

Jeff Gural’s integrity has given harness racing a stronger foundation.

“The people who went to school, went to the trotters at night. The people that cut school went to the flats during the day,” said Dave Stolz, who met Gural in junior high school.

Lucky for harness racing, Gural had class, otherwise The Meadowlands wouldn’t be here.

As teenagers, Gural and Stolz spent a lot of time at Roosevelt Raceway, and knowing the pain of losing that historic track, Gural didn’t want to see it happen again, especially to a venue like The Meadowlands.

“The place was 48 hours from being closed by the governor and I think that had The Meadowlands closed, I doubt if I’d be a breeder or an owner anymore,” said Gural. “I really think that I saved the sport. Most of the major guys buying these expensive horses want to win races at The Meadowlands.

“Unfortunately, most of the people are too young to have experienced what I did in the heyday of the sport. It was so much fun. I didn’t belong to a country club. I played golf but that wasn’t my thing, it was harness racing. I used to go to the track all the time.”

With such a deep love of racing in New York, it’s no surprise that Gural wanted to be front and center in helping the state get Video Lottery Terminals (VLTs).

When the legislation passed in October 2001, the New York City chapter of the U.S. Harness Writers Association reached out to Bruce Hamilton, executive secretary of the Harness Horse Breeders of New York State, to find an Unsung Hero to honor at their upcoming banquet. Hamilton said Gural was that person.

Gural had a lot of political contacts that were a great help in the fight and was extremely enthusiastic and was constantly contacting Hamilton asking what he could do to help.

Gural’s dedication to the cause was admirable considering he didn’t have skin in the game other than being a fan.

“My wife [Paula] said to me, ‘You’re working so hard on this and you don’t own a racetrack,’” said Gural. “That’s what motivated me to buy a racetrack, even though it wasn’t hard to push me into buying a racetrack.”

Gural bought Vernon Downs in 2005 and the following year opened Tioga Downs, built on the site of an old quarter horse track.

In 2006, on the recommendation of Stolz, Gural hired 28-year-old Jason Settlemoir as his vice-president of racing and simulcasting for Tioga and Vernon Downs. Settlemoir is currently the chief operating officer and general manager of The Meadowlands, as well.

After 15 years together, Settlemoir has nothing but praise for Gural.

“He’s one of the most loyal people I’ve ever met in my life,” said Settlemoir. “The loyalty part means a lot to me because that’s how I grew up. And all the charity stuff that he does. Those are the important things that really matter in life. Nobody knows everything that he does.”

Anthony MacDonald, founder of TheStable.ca, knows firsthand of Gural’s generosity and has been the beneficiary of it not once, but twice.

In 2014, when MacDonald was a rookie candidate running for Progressive Conservative representative for Guelph, Ontario, he invited Gural to speak at one of his events.

“I literally called his office every day for three weeks until he finally took my call,” said MacDonald. “He said, ‘I don’t know who you are but I don’t think you’re going to go away without me taking the phone call, so what do you need?’”

The politicians that MacDonald was working with didn’t think that this huge real estate tycoon (chairman of Newmark Grubb Knight Frank) with ties to horse racing would literally fly to Ontario to speak because he was a rookie candidate. So, it meant a great deal to MacDonald when Gural accepted his request.

“It mattered to me that Jeff Gural took an entire day out of his schedule to fly to another country to speak to politicians that he didn’t know anything about and wouldn’t accept any money for doing it,” said MacDonald.

The following year when MacDonald was starting TheStable.ca, he reached out to a number of breeders, one of them being Gural with Allerage Farm, prior to the Harrisburg sale, to explain to them what he was trying to do.

“I think [Gural] was very skeptical about the way in which we were going to do it, but still said ‘Listen, I’ll tell you what I’ll do. If we end up retaining any of these horses, I’ll send a horse or two to you,’” said MacDonald. “And it was the damnedest thing, he sold every horse. I came to him and said I appreciate the offer. Thanks very much and I think he understood that I was probably a little deflated from it, but at the same time understood that that’s the way it goes. And he said, ‘You know what, I’ll tell the sales office that you’re going to be buying a couple of horses. Just buy a couple of mid-level horses and we’ll see how it works out.’

“So, it did literally go from him offering to put a couple of Allerage’s horses into The Stable to literally purchasing two horses with his own money to put in TheStable.ca.”

“Being in business with people of credibility means a lot,” said MacDonald. “It was important to have horses with him. He has three horses in our barn right now that did come from Allerage that he did keep a piece of. Jeff’s always been a very polarizing person so people can have mixed feelings about him, but nobody can say he doesn’t love horse racing.”

As a breeder, owner and proprietor, Gural has accomplished much in this sport, but by far his biggest disappointment is not being able to convince the horsemen to take 5 per cent of the slot revenue and use it for marketing.

“We would have been on TV, because we have a better product than the thoroughbreds because our horses race so often,” said Gural. “I think the leaders of the horsemen have made a decision that they don’t want to do it. I think if you put it to a vote of the horsemen, they would all vote that we should take 5 per cent and form a major marketing effort. I actually had asked the [U.S. Trotting Association] a couple of years ago to poll the members and I would pay for it. And their response was, ‘We’re not going to do it because we know what the answer is.’

“I just feel sorry for any of the young people in the sport. Honestly, I don’t see them having a great future. I hope I’m wrong, but you saw what happened at Pompano. Casino companies want to get rid of [racing] and it’s going to be harder and harder when our customer base dies off. There are very few young people that we have as customers.”

Gural’s Hall of Fame induction will take place on Sunday, July 4 having been delayed a year by COVID-19. He feels the timing for his election couldn’t have been better since there is finally progress being made in the fight against drugs in harness racing.

“I want to be remembered for getting rid of the drugs in the sport,” said Gural. “I’m just an honest person and I just feel that there’s no grey area when it comes to integrity. And most people fall into this gray area where they’ll use as an excuse that they wanted to be competitive and they felt in order to be competitive they had to use a drug trainer. That’s what I used to hear all the time. I just don’t see it that way.”

When Gural took over The Meadowlands, the first thing he wanted to do was clean up the drugs.

“I just didn’t realize how difficult it would be,” he said. “I would be talking with people socially and it was obvious to me that they knew what was going on and they don’t speak up. It’s a cultural thing that people look down on someone who’s a snitch. And I think it applies in almost every facet and the mystery is the people that are cheating are taking money from the honest people. So not only are these people not helping you, but they’re ignoring the fact that they’re taking money out of their pockets by cheating.”

At 78, Gural shows no sign of slowing down because he still has things he wants to accomplish.

“I breed horses, I buy yearlings, so, yes, I’d like to win a Hambletonian,” he said. “That would be a thrill. I’ve never won a Breeders Crown race. I’ve won a lot of other stakes, but those two have eluded me. What’s that saying? If you buy yearlings, you’ll never want to die because you’re always dreaming. You spend two years maybe more deciding who to breed the mare to. Eleven months gestation. Eighteen months of raising the horse. Nine or 10 months of training the horse. And now the horse is behind the gate and in two minutes you’re going to know if this horse is any good. And that’s it. So, it’s kind of exciting.”