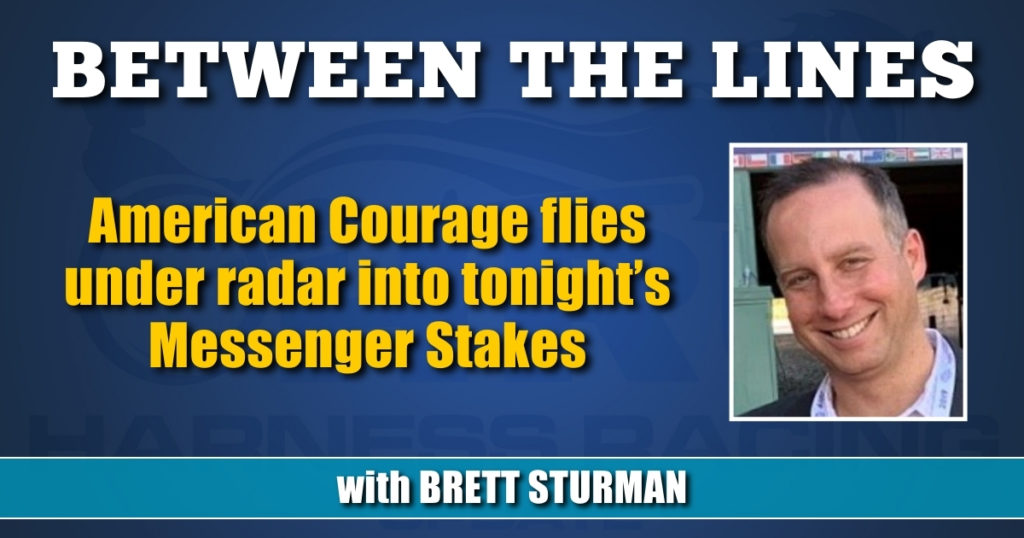 Having raced almost exclusively in New York state in his young career to date, American Courage (American Ideal–Nota Fool Bluechip) is a colt that not many outside of those circles may be intimately familiar. Owned by Fiddler’s Creek Stables LLC from Michigan, American Courage’s trainer Travis Alexander thinks that’s about to change big time.

Entered into the first of two Messenger Stakes eliminations tonight (June 25) at Yonkers, American Courage drew into the more contentious of the two divisions. While presumptive Messenger favorite Abuckabett Hanover drew into the second elimination and should go off at odds of about 1-5 coupled with stablemate Exploit, the first elimination is highly competitive. In that race, New York Sire Stakes (NYSS) star American Courage will get his first true taste of open stakes competition going against last year’s Governor’s Cup winner Always A Miki, a former Pennsylvania Sire Stakes (PASS) winner in Chase H Hanover, and a couple of strong invaders from Ohio who are also testing the open stakes waters, Heart of Chewbacca and Charlie May.

In a normal stakes calendar, American Courage likely would have already raced against these types in Canada. But with the shift in Woodbine Mohawk Park stakes, the Messenger becomes the first opportunity to see he matches up against a group that includes not only North America Cup eligibles, but also Meadowlands Pace eligibles.

Asked how American Courage measures up and his path to get here, Alexander said, “He’s done everything right; he’s done everything we’ve asked. COVID in Canada threw everyone a monkey wrench, with the North America Cup and Somebeachsomewhere stakes having to be moved (to late August and early September). That’s what changed his schedule and I wasn’t going to take him to Buffalo for New York Sires. It was too risky, and the risk-reward wasn’t there. But I think he stacks up better than anyone realizes. Matt (Kakaley) and I are the only two that really know how good he is, and I think everyone else is going to see (tonight).”

Even if American Courage attracts betting attention tonight off his 5-1 programmed line — which he probably will— he likely still won’t go off as the race favorite. That would be only the second time in his career that’s occurred, with the other time being his first start this year. In that race, a division of the Reynolds stake at Yonkers, American Courage was dismissed at almost 4-1 against the Chris Ryder-trained and fellow Messenger starter I’ll Drink To That, who was bet down to 1-5. American Courage won handily that night, though Alexander doesn’t put much stock into the odds of the two horses from that night.

“I wasn’t really surprised (by the odds) because I’ll Drink To That had already raced, and raced well,” said Alexander. “I don’t look at or worry about the odds as much as focusing on my own horse and how he responded, and Matt said he had a lot left in the tank that night. That was just off one qualifier, too. He’s much fitter now than he was then. He’s coming into this race excellent, and he trained an amazing mile this past Saturday. Every time I tighten the ratchet he responds in spades. I don’t know how high his ceiling is to be honest with you but it’s fun because he’s amazing.”

With a possible prep in NYSS at Buffalo out, American Courage enters his Messenger elimination on the heels of a career best 1:49.4 mile, taken almost two weeks ago at Pocono Downs. In that win against older rivals, Alexander got out of that race exactly what was needed.

“I never really tell Matt what to do, but I did just tell him that we can’t lull around there in 1:53,” said Alexander. “And he just did it from there. That was the easiest kind of 1:49-type mile you could hope for; he was on cruise control.”

Though American Courage has raced only on smaller-sized ovals, Alexander has no doubt of the colt’s ability to race on the big tracks.

“I hate to keep saying it because I don’t want to get ahead of myself,” he said. “We train down on a mile track in Florida at Sunshine Meadows, he’s been on a mile track. Without sounding arrogant, they have no idea what this horse can do and he’s going to open some eyes on a mile track.”

For future races, Alexander said that as long as American Courage can prove to him that he can go with the open sophomore division, then his path would include those types of races over New York Sire Stakes. The trainer said he is frustrated by the scheduling.

“New York’s schedule is horrendous,” said Alexander. “He may not even see a New York Sire Stake because they conflict with all of the other major races. He’ll see the Empire Breeders at the end of August and that’s it.”

Just as he’s staked this year for the North America Cup, American Courage was staked last year to another major stake at Woodbine Mohawk in the Metro stakes, but his 2-year-old season came to an end shortly before that in a total puzzler in the $225,000 NYSS final at Yonkers.

The only time he’s ever been beaten in 10 career starts, American Courage came to a stop that night when setting a seemingly comfortable pace on the lead. It was widely reported at that time that a virus had run through Alexander’s barn prior, but that American Courage and trained back good for the final. “We still don’t know definitively what happened,” said Alexander. “It wasn’t an A-fib, his blood work and everything else came back good, it was one of the weirdest things. One of our vets who bases out of Lexington had some thoroughbreds do the same thing where they were coming off a virus and when they push their hearts faltered. But we still don’t really know for sure what happened, and we’ve done everything to try to figure it out. It might have just been a fluke and he picked a bad time to have a bad day.”

With that race long since behind him, American Courage is strong coming into the Messenger. If he can pass this week’s elimination test, even tougher challenges could loom in next week’s final at which point we’ll continue to see just how good he really is.