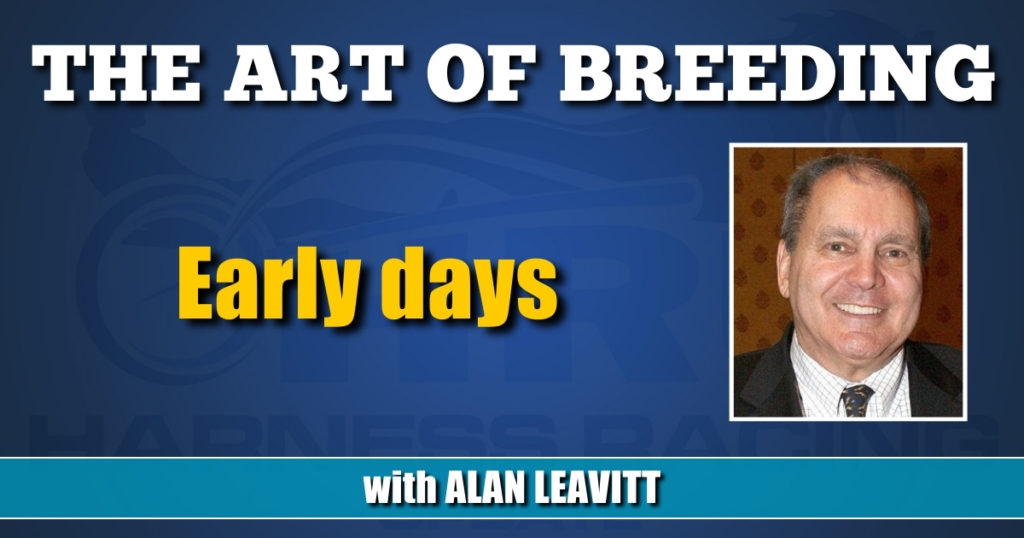 My father came to this country in 1918, a penniless 18-year-old Jewish, Russian immigrant. An immigration official at Ellis Island, who clearly believed brevity was the American way, shortened Boris Levitonsky to Boris Levit. By the time I came along, his last name had regenerated to Leavitt.

My father was a linguist, already speaking six languages, and in three weeks he already had enough English to start charging for English lessons for refugees whose horns were even greener than his.

He settled in the Bronx, then a Jewish enclave, and New York was his home for the next 10 years. During that time, as he struggled upward, he learned to ride at the various riding stables that proliferated in those days. More importantly, every fall he would go to the National Horse Show at Madison Square Garden, each year being able to afford a slightly lower seat.

It was then, watching the beautiful, high stepping saddle horses, that they came to symbolize to him the realization of success. Like the green light on Daisy’s pier that had such a special glow for Jay Gatsby, show horses held a deep fascination for my father, and he passed it on to me.

By the time I was 5 or 6, my parents were living in Hanover, PA and together running their first women’s clothing store, Lobells. That later was amended to Lana Lobell, both in honor of my sister and to settle some complaints of plagiarism from a competitor who had a similar name, and had it first.

My father had, by then, acquired his first horse, a beautiful, dark chestnut pleasure mare named Scarlet. She was, however, also gaited, and I’m guessing her tail had been set. She was stabled with a local trainer, Johnny Green from Bowling Green, as he liked to introduce himself. He operated out of a stable located on an unpaved alley that was a block over from Hanover’s main drag.

Johnny started showing Scarlet at the local, one day Sunday horse shows, that were everywhere in those days. He would then appear at our house the next day, Monday, at lunch time, and he would report the results of the show the day before to my Dad.

Since I hadn’t yet started school, I would be listening to his recitals. One of them stuck with me forever.

“Mr. Leavitt, I showed your mare yesterday at Red Lion, and she went good. That judge tied me third in the five gaited stake, but I got cheated bad. Everybody that saw it knew I should have been second. So I cornered that judge after the class, and I told him he cheated me out of second. And I told him, ‘Judge, if I didn’t have to show in front of you again next week in Carlisle, I’d tell you what a no good S.O.B. you are.’”

It was my introduction to the great world of diplomacy, and it has stayed with me ever since.

So now it was 10 years later, and my father had his own private trainer, Jim Boxwell, and three saddle horses. Jim showed in the open classes, and I rode in the ones for amateurs —pronounced am-at-er, and probably still is.

There was a three-day show every June in Phillipsburg, NJ, at the Lanark Riding Club. It was no big deal, but it came two weeks after the Devon show, which was a very big deal.

Jim, our three horses, and me arrived at the Lanark show grounds early, two days before the show would start. And to our astonishment, also already stabled there were the Dodge Stable horses. For some complicated reasons I never really understood, Earl Teater, the Dodge stable trainer, had been persuaded to stay over after the Devon show, and there he was at the Lanark show grounds.

Needless to say, Teater had won both the three and five gaited stakes at Devon, which was par for his course in those days. His show string included Wing Commander, a liver chestnut stallion who was the reigning five-gaited champion of the world, Show Boat, the world’s champion five-gaited mare, and Meadow Princess, the world’s champion three-gaited mare. Wing Commander was then regarded as the greatest gaited horse of all time, and I think he still is.

For me, those horses and Earl Teater were directly descended from the Gods. I had seen Earl and Wing in the show ring a few times, most notably in 1947 when my parents took me, then 11, to the final night, stakes night, at Madison Square Garden.

That was the second, and last time, Wing Commander was ever beaten. Both times he lost to a mare named Easter Parade, who was ridden by Frank Bradshaw. The story goes that after the class at the Garden, Frank walked up to Earl, put out his hand, and said, “No hard feelings, I hope, Earl.”

Teater shook his hand and answered, “No hard feelings, Frank, you got the ribbon and I got the champion.”

Teater had quite a career before he signed on with Frances Dodge, the automobile heiress from Detroit, whom he stayed with for the rest of his life. One of his earlier jobs had been with a woman from Scarsdale, NY, Mrs. Reed Albee. She was the adoptive mother of Edward Albee, and so for several years the three Teater boys grew up with the future playwright whose accomplishments included Who’s Afraid of Virginia Wolf.

But back to the Lanark show, where, the morning after we shipped in, I found myself alone, standing at the edge of a track that ran around the perimeter of the show ring. There was a horse on the track, hooked to a jog cart, and I suddenly realized it was Earl Teater, driving Wing Commander.

They were flying, but as they came along side me, Earl Teater looked over, saw me, and said, “Hi.”

Somehow I croaked “Hi” back. And then I realized that Wing Commander actually had a funny mouth, because right in front of me, he ran his nose out. Earl Teater’s hands shot forward on the lines, and in a second Wing’s head was back where it belonged. Then they were gone, and for the first time I understood that even though they were gods, they still walked on the same earth I did.