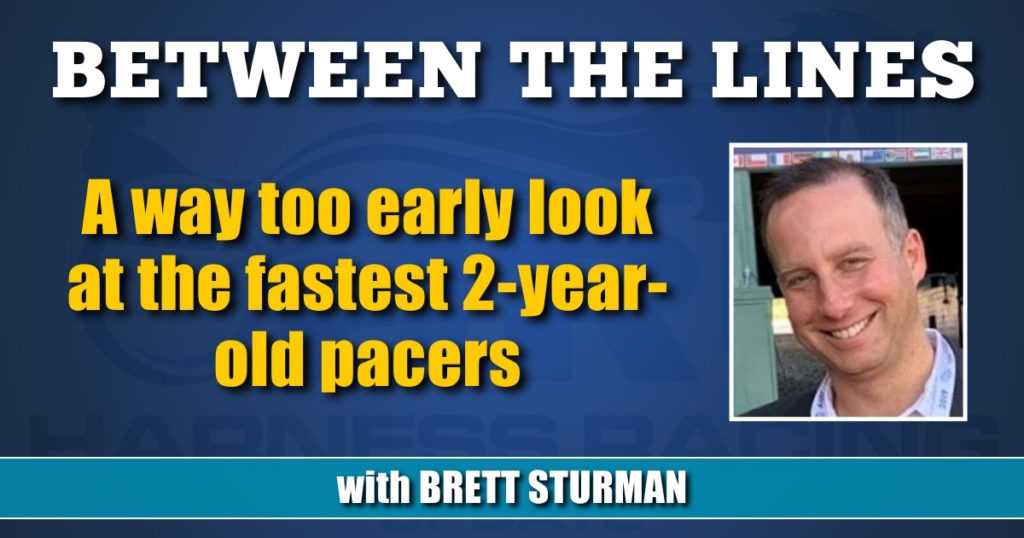 As freshman pacers begin hitting the track, here’s a look at the 10 fastest, so far.

It’s only been less than two weeks since the new crop of 2-year-olds have hit the track in qualifying races, but there’s been a frenzy of action during that time. Particularly in New Jersey at the Meadowlands Racetrack and at the Gaitway Farms and Magical Acres training facilities, the amount of early talent on display has been plentiful.

With 2-year-old stakes racing having kicked off at the Meadowlands Saturday (June 19, results unavailable before press time), the below list is expected to change rapidly. But based on the completion of baby races at the Meadowlands heading into Saturday, here is a breakdown of the top-10 fastest pacing freshmen.

One of two geldings on the list and one of three here trained by Ron Burke — who trains the top three — he paced the fastest baby race at Gaitway Farms on the morning of June 7. A relatively inexpensive yearling from the Lexington Selected Yearling sale at $90,000 — considering he’s a half-brother to Captaintreacherous — he capitalized on a pocket trip with Tim Tetrick to get up by a half-length. Though not on the list since he doesn’t have a mark (at least at press time), an honorable mention must go to Treacherous Tom. Yet another Burke trainee, he set the pace in that Gaitway qualifier with David Miller and was digging in gamely through the stretch before being collared late. JM’s Finaltreasure will qualify again at Gaitway on Monday (June 21) and in the same race with the horse next up.

Another by Sweet Lou out of a champion mare, it looked like he had a lot more to offer in a wrapped-up win at Gaitway on June 14. He sat well off of a loose leading Holloway-trained Huntsville colt, but closed into the margin in the latter stages with ease to win going away with a last quarter of :27.2. He appeared to be doing it entirely on his own with no visible urging from Yannick Gingras; will get an even better read on him Monday (June 21) when he squares off against stablemate JM’s Finaltreasure.

Also trained by Burke, she’s one of four fast fillies currently on the list. She’s also one of three Huntsvilles, too. That first-crop sire is standing in New York for a fee of $6,000 and if these early performances are any indication, that price could soon be on its way up. In her lone qualifier thus far at Gaitway from June 7, she bested a field of three others with a last quarter blitz of :25.2 which was the fastest final split of any race that day. She sat last of four until the top of the stretch when Gingras angled her widest of all and got up in the final strides doing it on her own. Out of an $880,000 earning mare, she was a $160,000 yearling buy from Lexington.

I Did It Myway 1:54.4 (Captaintreacherous-Flyme To The Moon)

One of four by Captaintreacherous and one of two Alagna trainees on the list, he qualified second time out at the Meadowlands to win easily by over four lengths in a time of 1:54.4 with a last quarter of :26.2 He rated the 5-2 morning line favorite heading into his Geers Stake division on Saturday at the Meadowlands (results unavailable before press time).

Out of $300,000 earner Jessalilmixup and a half-brother to $120,000 earner Bestgirlfriendever, this one is a Goshen Yearling sale graduate of just $16,000. He recently qualified for a fast win at Pocono to win by over 10 lengths with trainer Erv Miller in the bike. He debuts this week at Harrah’s Philadelphia with Marcus Miller getting the call.

He was a $170,000 Harrisburg buy and his dam is a sister to Western Fame. He’s another that debuted Saturday (results unavailable before press time) in his division of a Geers Stake and I would have expected a top performance. In this most recent qualifier, Andrew McCarthy didn’t even angle him off the cones until about mid-stretch but once he did the colt was absolutely airborne. He was credited with a :26.2 final quarter but he wasn’t even asked to pace until around the final eighth.

He first qualified to a 1:55 win on June 5 at the Meadowlands off a pocket trip, but then lost to Nancy Takter stablemate Lake Dora (Captaintreacherous—Bodacious Hanover) Saturday. The Takter trainees paced their miles in 1:54.1 and 1:54.3, respectively).

Out of 2-year-old champion mare Economy Terror, he’s a half-brother to One Eight Hundred. Trained by Taker, as is his brother, this one was a hard-to-figure yearling purchase of just $50,000. Having already qualified in 1:55 with a last quarter of :26.4, his career seems to have more early promise that was potentially first judged as a yearling.

A $200,000 yearling purchase, this filly kicked off her career by winning at Gaitway easily, kicking home in :26.4. Out of the sub-1:50 and over $800,000 earning pacing mare Big McDeal, she looks as good as advertised in her early going.

By first crop sire Fear The Dragon standing in Ohio for $6,000, this filly qualified nicely off a pocket trip to a 1:55.2 win for trainer Christi Noble. She was purchased from the Lexington Selected sale for only $15,000.