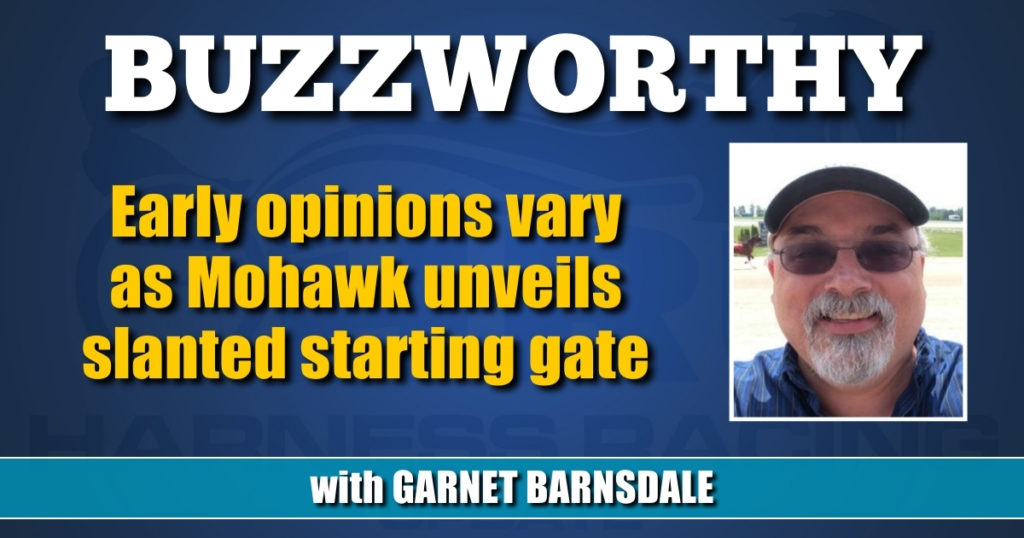 The Ontario track debuted the new gate Friday for its return to racing, thus ending its experiment with having the number 10 horse in a trailing position.

There was a bit of a buzz on social media this week as some tweeters wondered about people’s opinions on Woodbine Mohawk Park moving the number 10 horse out of the trailing position and back on the starting gate.

The gate is also slanted on the outside to give the horses that draw widest a seemingly better chance at getting positioned near the front leaving the gate. Mohawk Park announcer Ken Middleton had the perfect description of the new slanted gate in response to a curious tweeter: “A traditional gate would be like attaching a ladder to the back of a truck. It’s straight across for everyone. This gate has wings that are slightly tilted — the outside horse further ahead than the inside horse.”

To find out why the Woodbine Entertainment Group (WEG) terminated the 10 horse as a trailer experiment and why they slanted the gate I went right to the horse’s mouth, the director of standardbred racing Bill McLinchey.

“When we moved the 10 horse to the trailing position, our goal there was to make the 10 more playable, and not have horsepeople feel like the race was over before it started,” McLinchey said. “I thought the pilot with the 10 starting as a trailer went okay, but as we went on it seemed apparent that horsemen like to be in control of their own destiny. They don’t want to follow anyone.”

Switching to a slanted starting gate seemed to be a case of perfect timing with the idea of giving the outside horses a better chance of leaving.

“We were in the market for a new starting gate,” McLinchey said. “To stick with our plan of trying to make our odds board as level as we can and make the 9 and 10 horse a little more playable, we thought let’s try a slanted start and see if that will get those horses into the race a little more.”

McLinchey also mentioned that lining the horses up 10-wide will help put together bigger fields in stakes races.

“Let’s say you have 21 enter. Now you can run two divisions with 10 and 11 horses instead of three fields of seven horses, he said.

Drivers Louis Phillipe-Roy and Johnathan Drury shared the opinion that being on the gate will help certain horses who can leave quickly whereas others might be better off in the trailer position to immediately save ground and some positions heading to the 1/4 pole.

“It really depends on the horse,” Roy said. “If you have a big favorite that deserves to have a great chance, you’re better off starting with your nose on the gate. But I think from the trailing position you could get into the race easier and get a trip with a horse that seemed to have only a medium shot in that race.” Roy added that he wasn’t sure that the slanted gate would make as much of a difference on the big Mohawk oval. “I believe in slanted gates on 5/8ths or 1/2-mile tracks where the first turn comes quickly,” he said. “At Mohawk, there is almost a 1/8th of a mile before you reach the first turn, so, if you have a decent horse you have your time to get placed.”

“The trailer helped you get into the race in many cases,” he said. “I guess it all depends on what type of horse you are driving. If you are sitting behind one that wants to leave and you have a good shot then you probably want to be on the gate.”

He added that the slanted gate can help some horses that might not normally leave out of there when they draw the widest post. “It’s definitely going to help some horses that you know have a bit of gate speed but normally can’t get out of there that well,” he said. “I think its going to help put those types in play a little bit more, more so than if they had the 8, 9 or 10 hole before.”

The flipside though is the horses that draw inside might be affected negatively. “They will have to work a little harder to get away closer to the front now,” Drury said.

“I like being on the gate with some,” MacIntosh said. “But I’d rather be in the trailer with most.”

As for the slanted gate, he said he hadn’t noticed much of a difference yet, but it should be noted he was interviewed after one race card of 11 races was run.

“It might take the drivers a bit of time to see if they can leave from out there,” he said.

Bettor Ryan Willis, who is never shy to provide his opinion when it affects his wagering dollars, was never a proponent of having a 10 horse start in the trailing position.

“I like having the 10 back on the gate,” Willis said. “You actually get to handicap again and try to figure out what the drivers intentions are instead of them sometimes getting extremely lucky trips from the second tier that you never see coming. I like them trying a staggered gate, but hopefully it doesn’t hurt the rail horse even more.”

One thing seems certain, Woodbine Mohawk Park’s management isn’t afraid to tinker and try new things to improve the wagering product. Time will tell if the staggered gate makes a difference, but at least they are trying to level the playing field and make the outside horses more bettable.