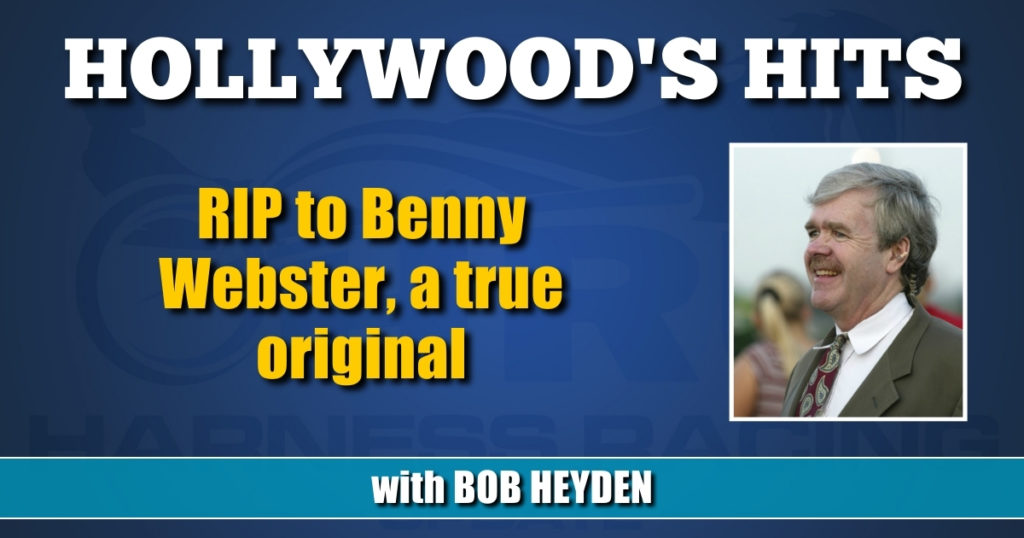 Ben Webster died June 7 at the age of 81. He was the oldest living Hambletonian-winning driver. He took down that classic in 1984 with Historic Freight for Skip Lewis.

I knew Benny almost half of his life and more than half of mine. In short, the man was unique, not cut from anyone’s mold, one who lived life to its absolute fullest and insisted on you sharing in the journey — and wealth — along the way. First, let’s take a look at his career highlights:

1. Benny was the best driver in North America from 1974-1978. Anyone who refutes this is simply wrong — or they weren’t paying attention. He all but invented the huge sweeping move to the top from the 3/8ths to the 5/8ths on a half-mile track. In that time period, Benny won the second Monticello OTB Classic in 1976 with Oil Burner, who the next year became one of the first true stars to race at the brand new palace The Meadowlands. He was the 1977 leading driver at the Big M for its first full season. Nobody won more races PRE-John Campbell at the Meadowlands than Benny.

2. A lightly-raced gelding named Seatrain was starring at Roosevelt in the mid-1975 when Lee Benson and Benny considered taking him to the Little Brown Jug. They did, and when asked about his outside post draw and potential strategy in the race, Benny told all who would listen, “I didn’t come here to WATCH!” Seatrain left strong and won it.

3. Oil Burner was part of a Bill Brooks package deal from Stanley Dancer early in 1976. Dancer had a colt named Keysone Ore that year — who would go 22-for-33 and set the new earnings mark of $570G plus — and there wasn’t a lot of room for a bridesmaid for the man who that year trained his record seventh Horse of the Year. But Oil Burner — headpoles adjusted and all — became a bonafide star under Benny’s tutelage. The most memorable race he had at 3 — at least for me — came in the $44,000 first edition of the James B Dancer at Freehold. Windshield Wiper sat behind the dueling leaders and won going away in 1:57 (fresh off his 1:53.3 TT which did not appear on the Freehold Program that day). To say Stanley and Benny weren’t exactly friends was pretty much spot on. But the most interesting part of the mano-a-mano duel they had on the track that day was the fact that Oil Burner was even eligible for the race. Stanley had made all his youngsters eligible to the race named for his late father long before Oil Burner was sold. (Oil Burner also won the first Oliver Wendell Holmes in 1976 and then Benny won it again in 1985 with Handsome Sum).

4. One year in at the Meadowlands, a glance at the “Track Records Page” in the program saw Benny with six of the first eight on the pacing side. This was 1977, and John Campbell was two years away from his first of 16 Big M titles and O’Donnell three years away from his major presence.

5. There are eight drivers in history who have won a million-dollar trot and million-dollar pace. Benny is the only one on this list not in the Hall Of Fame. Campbell-O’Donnell-Ron Waples-Tim Tetrick-Brian Sears-Ron Pierce and Mike Lachance are the others. Benny won the 1984 Hambletonian for $1,272,000 with Historic Freight and the 1987 Wilson with Even Odds for a pot of $1,422,500.

6. Maybe the greatest pacing mare ever to step on a racetrack — Tarport Hap — was expertly handled by Benny. Come 1977, the powerhouse daughter of 1970 Triple Crown winner Most Happy Fella had already won 47 races which included a pair of back-to-back stakes-winning seasons at 2 and 3. She was 8-for-10 that season- — all against boys. This feat has not been duplicated since in East Rutherford among the pacing set.

7. Benny paired Gidget Lobell and Oil Burner — and lo and behold No Nukes was born. Benny raced him at 2 — with Steve Demas — and the explosive colt captured the sport’s imagination — and especially Alan Leavitt’s and was syndicated for a $5 million tag after his never-to-be-forgotten recovery that almost was in the $1,760,000 Woodrow Wilson that year. No Nukes turned out to be a huge bargain and was an impact sire from day one. Benny/Demas sold him late at 2, Glen Garnsey drove him at 3, but it was Mr. Webster who was 100 per cent responsible for No Nukes in the first place.

8. Flak Bait winning the 1985 Pilgrim at Garden State Park. He finally caught up with Hambletonian record setter Prakas and beat him in the $587,000 test at the end of the year. He also took down the Kentucky Futurity, giving Benny back to back years with a Trotting Triple Crown race trophy.

10. Seahawk Hanover for Benny was the favorite in the 1981 Meadowlands Pace, but came up short still hitting the board. Even Odds was Benny’s richest ever win — and the only million-dollar win for sire Bret Hanover — when he scored in the 1987 Woodrow Wilson for a healthy $1,422,500 over Prince Royce.

Benny’s Franklin Lakes (and elsewhere) parties were legendary. Nothing was off limits. Everyone welcome. This was an extension of who he really was. If he had it, so did you. That is, if you could understand him all the time. I pity the person doing the subtitles in the “Ben Webster Story.” Yes, he did speak his own language. I found myself checking the person next to me at times to see if this was just me. But the communication he had with a horse was 100 per cent undeniable. He had a sense, a comfort level. Horses liked him. Much like comrade-in-arms Buddy Gilmour, they had a bond with horses, a feel and one-on-one with a horse that was undefinable. And oh, how he could make speed.

An original, but no choir boy

Benny was not the boy next door. The Meadowlands had him under investigation in the early part of 1984, nothing came of it. But, the winner’s circle that Hambletonian Day made for some interesting camera shots. Don’t look for Benny in the choir in any high school yearbook. He lived the way he saw fit. He followed no one. If you ever were behind Benny on the line for the Confessional, you had better have checked your watch or called the babysitter. Benny was indeed Benny. You know, the guy who you didn’t know across the room who had just picked up your check.

I cannot remember the exact details of this one, but it is so good that 75 per cent is sufficient. A crowded restaurant had a long waiting list one night. So Benny’s group asked for a table and were told there were no tables available. Benny peeled of two $100 bills and told the Maitre D’, “Here, go buy some F- – – – – – lumber!”

The last decade of Benny’s life, Chris entered and was a godsend of epic proportions. On your list of the 10 most sincere people ever, include her. Children Laureen, Daryl and Mark are all good/primo citizens. The car wash in Goshen gave Benny some later-in-life purpose. Benny did his best to make it to the Hambletonian every year and both Roosevelt Reunion/Appreciation Nights held at the Meadowlands. Was he well received? You betcha. He’s remembered fondly as someone who always was in play and a friend to the $2 bettor. You HAD to consider whoever Benny was driving.

I once told Benny that I had uncovered a stat that he would not like. He had been last in the NJ Classic five straight years from 1984-1988. Not only did he not frown, his smile broadened as he said, “You can’t win it unless you’re in it!”

Benny was a part of harness racing history, a star during its greatest times. He was in the very first million-dollar race with a longshot named Secret Service (1980 Meadowlands Pace) won by Niatross. Your money was no good if Benny was anywhere in sight. There was usually a line waiting to chat with him. He won at the smaller tracks in Buffalo and upstate New York and on the grandest stage. Never intimidated. Not once. He and Buddy Gilmour were magna cum laudes of the school of making friends of everyone — even your enemies. He was a delightful man and I can remember word for word his extreme sincerity and pain he showed in June 2008 when everyone’s good friend Norma Campbell had passed. Benny was or near the top for a long time and was the King for a while there. But he was always — and I mean ALWAYA — aces among those who knew him best.

Benny “The Whip” Webster dead at 81

Benny “The Whip” was inspired at a young age in Hilton NY by his grandfather Ernest and his father Fay’s love of horses and the incredible sport known as harness racing. Benny won his first race at the Hemlock Fair in upstate NY at the age of 16 and his first pari-mutuel race at Buffalo Raceway in 1957. He raced between Buffalo and Batavia Downs through 1965 when his talented hands caught the attention of owners and trainers at Roosevelt and Yonkers Raceways. He took New York by storm and achieved driving titles at both tracks and earned the title “Master of the Half Mile.” In 1975, he went to Ohio to win the Little Brown Jug with Seatrain and 1976 was Monticello’s OTB Classic win with Oil Burner followed by the Oliver Wendall Holmes opening week at the Meadowlands. 1984 was a big year winning The Hambletonian with Historic Freight and then 1985 winning the Kentucky Futurity with his beloved Flak Bait. He represented the United States in International Racing Competitions and spent years traveling the sire stakes race circuits. Over his career encompassing five decades he was blessed to drive, train, or own greats such as Four Leaf, Ferric Hanover, Afella Rainbow, Seahawk Hanover, No Nukes, Even Odds, American Freedom, Tarport Hap and many more. Long after he retired, he enjoyed working alongside his daughter at the Hambletonian Auto Spa where he welcomed many from the industry or just fans to visit, catch up and walk down memory lane among his memorabilia there. And his two son’s following in his footsteps was one of his greatest joys.

He was a generous man his entire life, always wanting to help the little guy having been there himself. His respect for not only his fellow drivers and trainers went even more so to the grooms that cared deeply and exhaustingly for the animals they were tasked with. His career was his life only second to his family. He loved gardening and was so proud of his Gentlemen’s Farm in Franklin Lakes. He always said that he accomplished more and lived more in a few short years than most people can in a lifetime. No regrets ever. He would always be willing to tell you the story of one of his three world champions or his shenanigans along his journey.

He is survived by his long-time love and best friend Christine Territo; his son Mark (Cindy) Webster of Gaines, MI; daughter Laureen (Tim) Somers of Goshen, NY; son Daryl (Dorrie) Webster of Walton, NY; his beloved grandchildren Mark (Sarah), Brian (Anna), Katelyn (Josh), and Kyle; his great-grandchild Adrielle; his sister Beverly Hall and nieces Kara, Renee and Nanette of Franklin, TN. His family expresses immense gratitude for the staff at Willow Branch Health and Rehab, TN, where he spent his last few months in the loving care of many wonderful, dedicated caregivers.

Visitation and a Celebration of Life will be held Saturday, June 12 from 1 p.m. – 4 p.m. at Donovan Funeral Home, 82 South Church St, Goshen, NY.

In lieu of flowers the family requests that memorial donations be made in Ben’s name to the Standardbred Retirement Foundation (adoptahorse.org) to provide a little more love in the lives of his beloved retired harness horses.