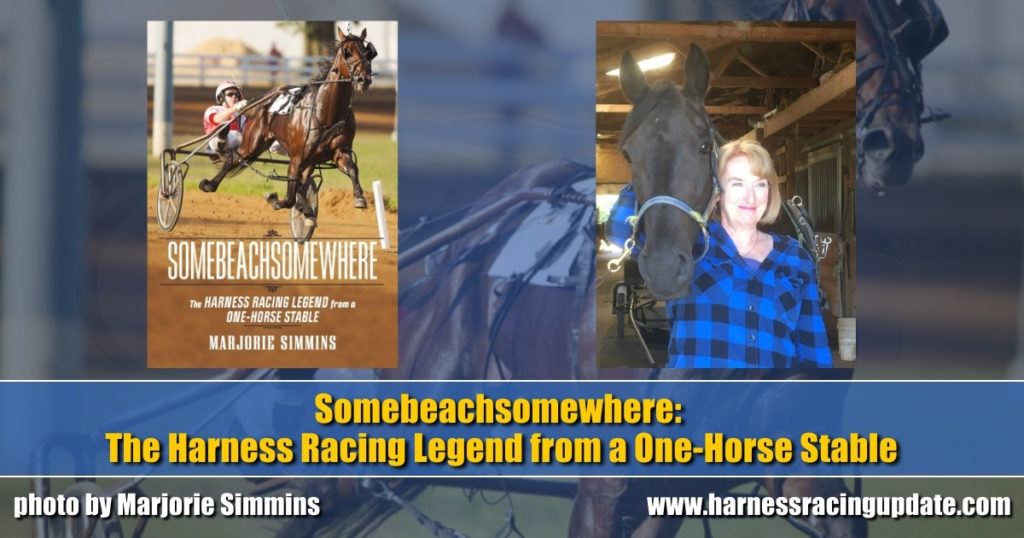 Somebeachsomewhere: The Harness Racing Legend from a One-Horse Stable

Marjorie Simmins calls her home in D’Escousse, NS “the center of the world.” It’s a fitting place for the author to introduce her new book about a Nova Scotian horse who became the center of the racing world in his all-too-brief lifetime. Tuesday (May 25) was the virtual launch for “Somebeachsomewhere: The Harness Racing Legend from a One-Horse Stable.” Nimbus Publishing and the Canadian Horse Racing Hall of Fame hosted the online event, with owner/trainer Brent MacGrath and driver Paul MacDonell answering questions alongside Simmins on the shared screen. More than two years after Somebeachsomewhere was euthanized, interest in his story remains strong enough to warrant a full account.

“Somebeachsomewhere: The Harness Racing Legend from a One-Horse Stable” is shaped by interviews with most of the major players in the late stallion’s racing and breeding careers. MacGrath, who purchased him as a colt and campaigned him in his two years on the track, provided much of the material; there are also contributions from fellow Schooner Stables members Garry Pye, Reg Petitpas, Jamie Bagnell, Pam Dean, and Stu Rath, as well as Brent’s wife Rhonda MacGrath. Simmins interviewed “Beach’s” breeder Stephanie Smith-Rothaug to learn of the unusual circumstances behind the colt’s pedigree and sale; explored his stud career at Hanover Shoe Farms with Dr. Bridgette Jablonsky; and discussed Somebeachsomewhere’s lone overseas breeding season with David James of Empire Stallions, Australia. Through interviewees’ accounts (which include remarks from HRU editor Dave Briggs), quotes from race calls and published articles on “Beach”, Simmins paid homage to a horse she never met or watched in his lifetime.

The Harness Racing Legend from a One-Horse Stable

Simmins explained that despite her equestrian background in British Columbia, she never connected with the harness racing community in that province. It was too far removed from where her love of horses began: “I was raised in West Vancouver, where there’s a little pocket of rural land called Southlands. It’s 99 acres of horses. It’s unique in Canada, a beautiful, special spot.” With its proximity to Exhibition Park racetrack, off-track thoroughbreds found careers with riders at Southlands before warmblood horses arrived on the scene. “There were at least three harness racing tracks a little out of Vancouver in the suburbs that I was aware of, but I didn’t move in those circles,” she recalled. Hunter-jumper riders weren’t exposed to standardbred racing, or the post-racing potential of harness horses, so “the standardbreds came into [her] consciousness later on.”

Why document Somebeachsomewhere? “There were a number of reasons,” Simmonds told HRU in an interview Wednesday. “I think writers are fascinated by big, wonderful subjects, and this was obviously a big, wonderful subject. I thought with my equestrian background, in some ways, it would make things a little easier for me.” She added that there was a learning curve in getting acquainted with harness racing: “In fact, I had to do two solid years of research and interviews and so on, so there was nothing easy about it.”

After relocating to Nova Scotia, Simmins had taken Western riding lessons from the wife of a Northside Downs driver, and soon took an interest in the North Sydney, NS track that was “somewhat in [her] backyard.” Listening to friends in Cape Breton and learning more about standardbreds, she realized Somebeachsomewhere “was the Secretariat of harness racing,” yet had no book to document his impact.

To gain an appreciation for Somebeachsomewhere’s accomplishments, the writer watched his race replays on YouTube. “I was watching his races, and I’d sit there crying,” she recalled, feeling drawn into the magic of the pacer’s 2007 and 2008 racing seasons. “It’s the power and the majesty and the heart and determination. […] I was just like, ‘Wow — this is the best of the best I’m watching.’” She found that his performances moved her in the same way that watching a superior thoroughbred or show jumper in action would.

The author noted that she thought racing fans would have an automatic interest in a Somebeachsomewhere biography, but she also wanted it to transcend that niche audience. “My intent with writing the book was to make sure that anyone who picked it up would enjoy it,” she explained. “That meant that I had to write in a particular way that wasn’t going to put off the harness racing people and was not going to mystify the general reader. It was a careful dance that I had to do.” Simmins added a glossary of harness racing terminology to help the story transcend boundaries.

But will there be readers who aren’t already familiar with the famed pacer and his sport? Simmins is convinced, and convincing, about her book’s prospects. “Remember, this was a Canadian hero,” she said. “The horsepeople will find horse books, they simply do. I do! I’m always interested in whatever horse is being written about, but I wanted Canadians to know that they had a superstar and his legacy continues.”

For animal lovers who might avoid a racing book due to disturbing media reports about poor treatment of ex-racehorses, “Somebeachsomewhere: The Harness Racing Legend from a One-Horse Stable” also visits the topic of life after racing, featuring an interview with Joanne Colville of the Ontario Standardbred Adoption Society. “I knew there would be critics of the industry, because there simply are,” observed Simmins. “These are our four-legged darlings and we need to take better care of them than we do. People like Joanne Colville have a very special place in Heaven.”

Admittedly “still learning” about the sport, Simmins is an enthusiastic newcomer to harness racing, having made visits to Northside Downs and Inverness Raceway and occasionally Truro Raceway in the recent past. (All three tracks’ seasons are currently on hold due to heightened Nova Scotia COVID-19 restrictions.) “It’s been a treat to learn more, and I do feel lucky that there are great tracks here,” she shared.

The author called her new release “ambitious” in scope, but “it wasn’t a difficult sell, at all” when she approached Nimbus Publishing with her initial proposal. Brent MacGrath was also on board early with the idea of Simmins’ book, from when she first called him about the project. Now, as copies of the finished book begin reaching readers, Simmins said she looks forward to being able to meet MacGrath’s two colts and a filly, all by Somebeachsomewhere, stabled at Truro Raceway.

“My hope for the book would be that all those wonderful things that people experienced watching ‘The Beach,’’ hearing about ‘The Beach,’ reading short articles about him, etcetera, that they could experience that again in the book,” she noted. “It’s a feel-good book, because the world is not in a great place right now.” As Somebeachsomewhere’s descendants carry on his legacy in racing, Simmins’ book keeps his name alive for a wider audience.

(“Somebeachsomewhere: The Harness Racing Legend from a One-Horse Stable” is now available at Canadian booksellers; the Canadian Horse Racing Hall of Fame receives a percentage of sales via its website. The American publication date is June 15, 2021).