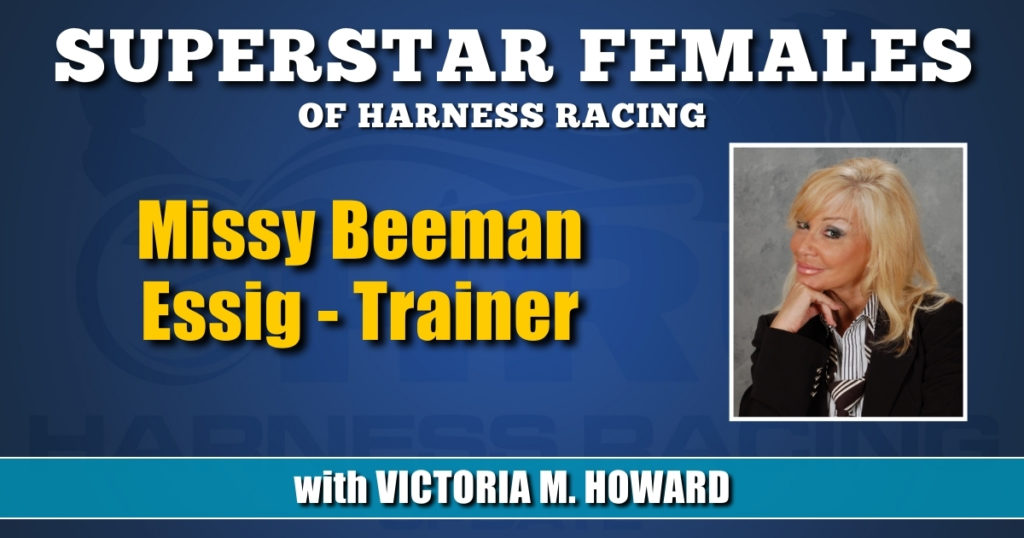 Born in Angola — a little town in Indiana — Missy Beeman’s love for horses and hope of one day becoming a trainer was all she could dream of as a young girl.

Beeman’s father, Russ Beeman, had a stable of horses that Missy would help groom.

“We would work with the horses, then when we were finished dad would go to his ‘other job’ running his logging business. Dad would always keep a small stable of about six or seven at a time,” said Missy, “so you could say it was a family affair.”

Fast forward to 1990 when a local Indiana businessman named Virgil E. Cook graciously donated 110 acres of commercial real estate to the city for the purpose of developing a pari-mutuel racing facility.

“Hoosier Park means a lot to me for many reasons: the main one being that is where I met my husband, Joe Essig. We met when Hoosier opened, but didn’t start dating until 2008, and married the following year in 2009.

“When we met we both were already in the horse business full- time and after we married we joined together and started our own stable.

“We’ve had a lot of good horses, but DONTFUSSWITHRUSS and RUSSELL MANIA are the ones that put Joe and I on the map as a team in 2011-2012,” Missy said.

“Before meeting Joe, I worked for trainers Grant Wilfong, Gregg Haston and my dad, Russ Beeman.

“When Gregg Haston came to Hoosier Park opening year, I went to work for him. Between Greg, and my father, I learned a lot. I was just out of high school and was attending IVY Tech studying coding and medical records, but once I started working with the horses, it was goodbye IVY Tech.

“Looking back I wish I would have finished my education so I would have something to fall back on, but for those who are lucky enough to work with these incredible animals know that once it’s in your blood, it never leaves.

“My father always loved working with the 2- and 3 year-olds, but had claimers, too. I met my husband, Joe, when he came to Indiana from Ohio to drive. He drove horses for me a long time, before we began dating.

“When I look at winning pictures back then, it’s weird seeing us in the winner’s circle having no idea at the time that one day we would be married.

“Joe was also raised in the business for his parents Joe and Janet Essig always had a large stable in Lebanon, Ohio. My in-laws have had a lot of good stakes horses, so Joe had pretty good teachers.

“As a team, Joe does most of the track work and I oversee the barn. I do enjoy my time on the track, also, but I admit I only take the good ones and Joe takes the ‘not so nice’ ones,’ but we make a great team working together so for the most of the time things work smoothly.

“We race mainly at Hoosier which is home to us, but we also ship to Ohio and Kentucky. We live 15 miles from Hoosier racetrack and love the fact we don’t have to travel far.

“For the past four winters we stabled in Bell, Florida, and I got lots of track time there and loved it. Unfortunately, due to several surgeries on my back I have not been able to jog, but I look forward to getting back in the bike when I can.

Missy said her biggest night in the business came when winning the Ohio Sires Stakes finals with both Russell Mania and Dontfusswithruss. Both horses are owned by her parents and both are named after her father, Russ.

“That night was the start for my husband and I in getting better horses and owners. Up until then if we would have gotten money for finishing 6thplace, we would have been okay.

“As far as my favorite horse, there isn’t just one, there are several. Like I said, RUSSELL MANIA and DONTFUSSWITHRUSS put us on the map as a team in 2011-2012, and LITTLE ROCKET MAN is the fastest horse we have ever trained (1:47.2). But SHAM WOW is right there with them.

“I have to admit I am guilty in committing the biggest ‘no-no’ in the sport — falling in love with my horses. I’m not sure how anyone could work with their horses every day and not get attached. Although we mainly have 2- and 3-year-olds, we have a couple special horses that made the cut and stayed with us and I hope LITTLE ROCKET MAN and SHAMWOW will be in our barn until they retire.

“I know my parents and their partner Jack Freeman were offered big money and so was Jeff and David Fought, and thankfully they didn’t sell.

“ROCKET’s owners love watching him race and are enjoying the ride and SHAMWOW is safe because his owners, Jeff and David Fout think he’s pretty special and he is their homebred pet.

“Presently, Joe and I have 22 horses in our stable: 10 are babies and are all Indiana-bred, except one. They are all coming along well and am looking forward to seeing them race.

“We also train a horse for First Turn Stable, which is a stable where people can buy into a share and come and watch their horse race. Hoosier Park put this together to try to get new owners for the sport. It has been going on for several years now and it’s going well.

“It’s so good seeing new faces and how happy people are being involved in our wonderful sport. It’s a lot of fun being a part of this group.”