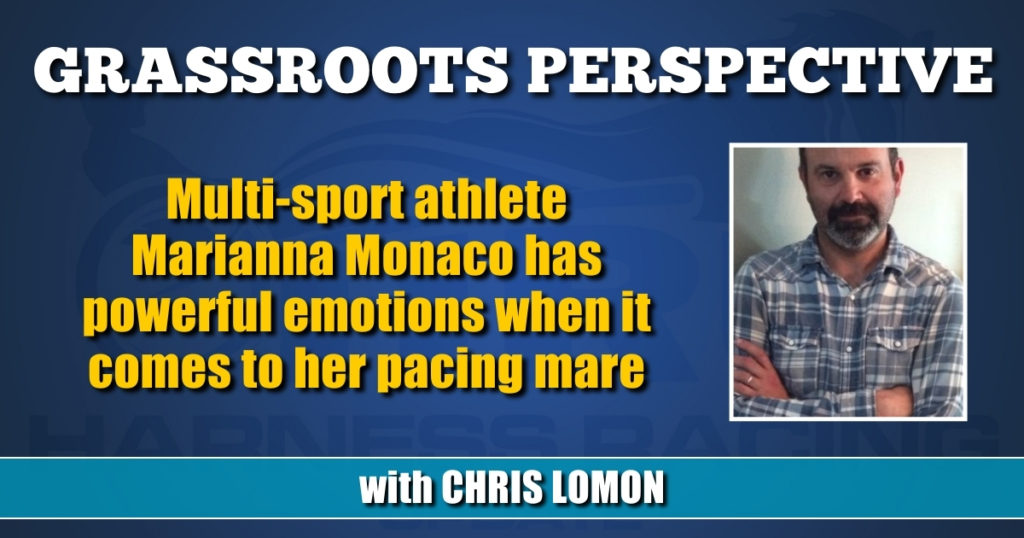 The emotion in Marianna Monaco’s voice is unmistakable.
With each word she speaks, the more tears – happy ones – the 25-year-old New Yorker sheds.

The reason behind the heartfelt reaction comes in the form of a brown mare, a pacer by the name of Powerful Pulse.

Now 11, the daughter of Quick Pulse Mindale has racked up nearly 50 wins in almost 280 career starts, a hard-knocking campaigner with over $275,000 in her bankroll and plenty of miles traveled, on and off the racetrack.

Courtesy Marianna Monaco | Marianna Monaco recorded her first driving win in 2018 at Goshen Historic Track, a win made even sweeter considering it came on her 23rd birthday. She registered her first pari-mutuel triumph in 2020 in the GSY Amateur Series at The Meadowlands, and completed her campaign with six scores.

“I bought her about three months ago,” said Monaco. “I originally had her about two years ago before she was claimed and I recently bought her back. I didn’t pay a lot for her. I wasn’t sure what to expect with her, but I thought to myself, ‘She’s older and I’ve had her before.’ I figured it was worth the shot, for only $2,000. She made me quite a bit of money racing at Monticello a few years ago. And now, here we are.”

“I bought him around seven months ago. The last few months have been a rollercoaster with him, to say the least. It’s nice to get him back, get a few starts under his belt and get him back to his old self again.”

For Monaco, both are the epitome of true athletes: dedicated to their craft, determined to compete, and always willing to go the extra mile.

She would know a thing or two about those traits.
Monaco is an accomplished multi-sport athlete, including her numerous successes on the golf course.

In 2017, she drove and putted her way to the New York State Women’s Amateur golf championship, one year after finishing second in the event. She won consecutive Women’s Dutchess County Amateur titles starting in 2019 and 2020.

But her sporting accomplishments don’t end on the fairways and greens. Monaco is also a standout bowler and softball player.

“Growing up, I played a lot of different sports. In high school, I was an all-state bowler, and bowled on the varsity team from seventh grade up until my senior year. I was on the New York state team that made it to the championship all six years. I stopped bowling after high school, when I was averaging about 215. I also played travel fast pitch softball. I played varsity softball. I had a lot of offers to Division 1 U.S. colleges – full rides – but in my sophomore year of high school, my dad and I talked about there not being much for softball after college. And that’s when I picked up golf.”

Monaco received a full scholarship to play at Newberry College (South Carolina), where she earned South Atlantic Conference Freshman of the Year honors and, was named SAC Player of the Year as a sophomore. She transferred to the University of South Carolina for her final two years and graduated four years ago with a degree in criminal justice.
All of those experiences, she offered, have helped in her horse racing career. She has had a long association with the industry.

Monaco started jogging horses at an early age. Her father, Nick, owned horses and she’s had other family members in the industry over the years.

She sees parallels between racing and her other athletic pursuits.

“Playing different sports allows you to be put in different situations every time you play. Mentally, especially with golf, it can be very draining. It’s just you and your brain… you learn something new every day. With golf, you can shoot a 65, come off the course and think that you left a few shots out there. I think with the horses, it’s the same thing. You learn something new about each horse every day – what they like, what they don’t, what benefits them most, what sets them back – and working with them, I realize how much other sports helped me with this career.”

Monaco recorded her first driving win in 2018 at Goshen Historic Track, a win made even sweeter considering it came on her 23rd birthday. She registered her first pari-mutuel triumph in 2020 in the GSY Amateur Series at The Meadowlands, and completed her campaign with six scores.

Add a Billings Amateur Series victory at Yonkers to her stat line, and the decision to carve out a life in the Standardbred industry has been a winning one for Monaco.

“They are long days, but they are rewarding days. This industry, you appreciate early on just how much of a rollercoaster it can be. When they say that it’s in your blood, it definitely is. When I went away to school for four years and came back, I got right back into the business. I haven’t looked back since.”

“It’s a learning process, in how you get to understand each horse. But at the same time that I’m teaching them, they’re also teaching me. It’s definitely a team effort.”

Having a teammate like Powerful Pulse makes striving for success a simple task.

“I remember I went home the day I was buying her back. I told my dad that she was coming back to me. She had just raced that day, and she came first over against a horse that ended up racing in a bigger series at Yonkers. They went 1:56.2 and she was seventh. My dad said, ‘Where are you going to race this horse? What do you think will you get out of this?’ I sat on her for a few weeks and I looked where I thought she’s fit best.”

“She’s kind of amazed me so far. Every week, I look forward to racing her. The text I get after she races, the different Facebook posts, the calls I get… people are really kind and tell me what I’ve been able to do with her is amazing…. it makes me emotional. I’m just very fortunate to be connected to her and to be doing something that I truly love.”