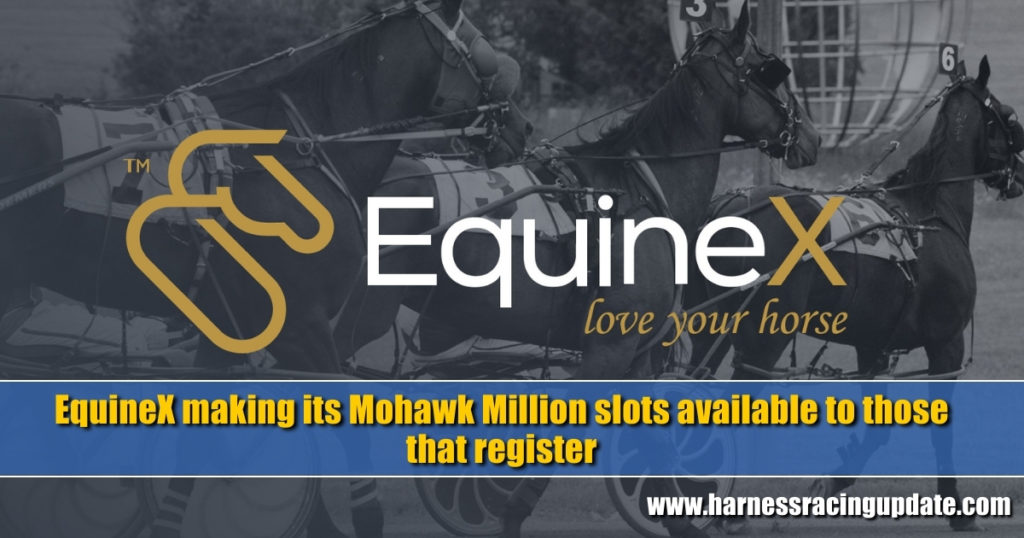 EquineX making its Mohawk Million slots available to those that register

An independent panel will select the best colt and filly to use the slots in the $1 million race from a list of horses registered with the company.

Paul Simmonds said there’s two main reasons EquineX is spending $200,000 (Cdn) to buy two slots to this year’s $1 million Mohawk Million. First, the standardbred owner and chairman of EquineX wants to support the concept of a major buy-in race. Second, he sees it as an opportunity to promote EquineX by making the slots available to those that register with the company.

“We bought two slots and we’ve designated one slot for colts and one slot for fillies. Basically, anybody that registers – and it’s $400 (U.S.) to register – they have an opportunity to use one of our two slots,” Simmonds said. “What you get for that is you get registered to use that slot if your horse is chosen. In addition to that, we’re giving 20 complimentary months to the (EquineX) trainer/owner app. Basically, you’re paying $400 for a right to use the colt slot or the filly slot.

“Once we have those horses registered, starting in July, every week we’ll list the top 25 colt earners and top 25 filly earners that are registered in our promotion. Obviously, if you’re not registered, you’re not included in that list… Then, on September 17, (a three-person) selection committee will choose from the list of 25 fillies and 25 colts. They’ll choose the ones that they think best represents the best opportunity to win the race. They’ll end up being the candidates and there will also be an also-eligible for both colts and fillies, because that’s written in the rules of the Mohawk Million that each slot owner can pick an also-eligible in case a horse in unable to race… In the event that the colt that was chosen was also the winner of the William Wellwood Memorial, then that horse gets a bye because of that win, so then we’d pick another horse from the colt slot.

“Then, after the post-race draw, we’re going to pick 25 names of registered horses that weren’t selected to be the candidate and each one of them is going to receive $500, sort of a consolation.”

The advantage is that it gives many more people a shot at a slot in the race at a less expensive entry point.

The deadline to enter is June 7. Full rules and details of how EquineX is administering the slots can be found on its website here.

This year, the Woodbine Entertainment Group (WEG) made nine slots available for purchase at the cost of $100,000 (CDN) each. The deadline to purchase a slot was reached on Feb. 15 with all slots sold. The 10th and final slot will be awarded to the winner of the William Wellwood Memorial on Sept. 11. Each slot is considered an entity that may be sold, traded or leased. The slot holder does not have to declare a horse for the Mohawk Million until the week of the race.

The second annual edition of the million-dollar race for 2-year-old trotters is set for Sept. 25 at Woodbine Mohawk Park.

The race debuted in 2020 with Venerate winning for trainer Julie Miller (full story here) en route to the Dan Patch Award as the 2-year-old Trotting Colt of the Year in the United States.

EquineX is the third party that owns two slots for the 2021 race. Ontario-based trainer Gino Toscani and Montreal-based Determination Stable also each hold two slots. As well, Brad Grant, Crawford Farms and Steve Heimbecker purchased a slot apiece (full story here). Grant also purchased a slot in 2020 and was the one that negotiated a deal with the connections of Venerate to use it.

“Initially, we have five horses that we’re featuring, three standardbreds. Two of them are 2-year-olds, one is with Chris Beaver and that’s a Muscle Hill filly and one is with Nancy Takter, a Father Patrick colt. One is an aged trotting mare with Chris Beaver,” Simmonds said. “Then we have two really beautiful thoroughbred fillies that we’re featuring. They are 2-year-olds and both of them are with Phil Antonacci, being overseen by Jimmy Takter.”

EquineX, featured previously in HRU here and here, is an app-based system that aims to use transparency to increase accountability and integrity in the sport by creating secure, detailed records for every horse placed on the platform.

“We’ve got a number of new products coming out this summer and fall and we really think this industry needs – not just standardbreds, but in thoroughbreds – to pay attention to the whole integrity issue, especially in view of what’s happened with (thoroughbred trainer) Bob Baffert,” Simmonds said. “Had his horse (Medina Spirit) been on our platform, you would’ve known exactly what that horse had been treated with in the timeframe that it was treated. It would also have been an issue in that Propulsion case, too. That would’ve been recorded and it would’ve been right there in black and white when it happened. That’s what this industry needs, especially, as you know, from one jurisdiction to the next these rules are pretty complicated. You’ve got to know what’s going on. If you’re in Ohio and racing in Kentucky or racing in Indiana, you’ve got to know the rules there as well as your own state.”