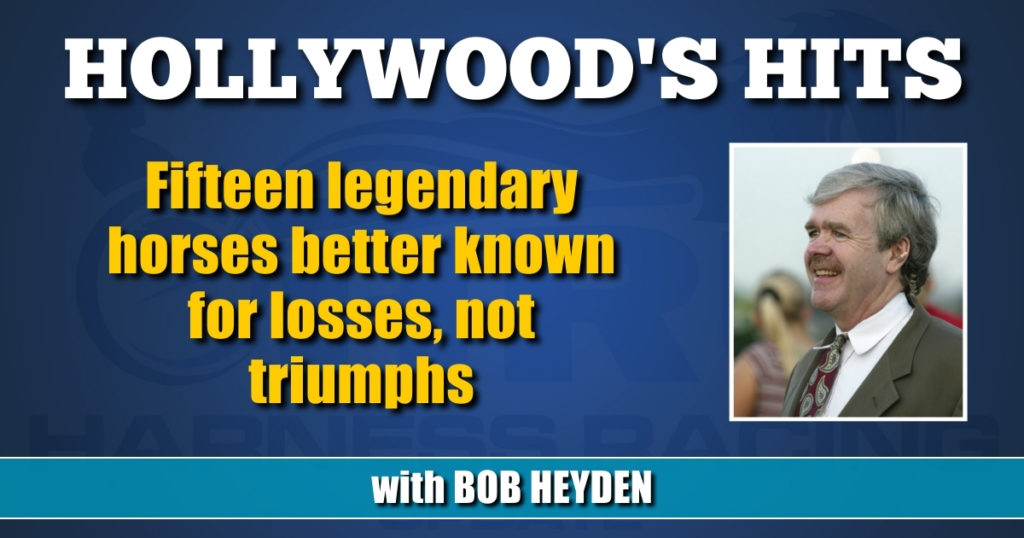 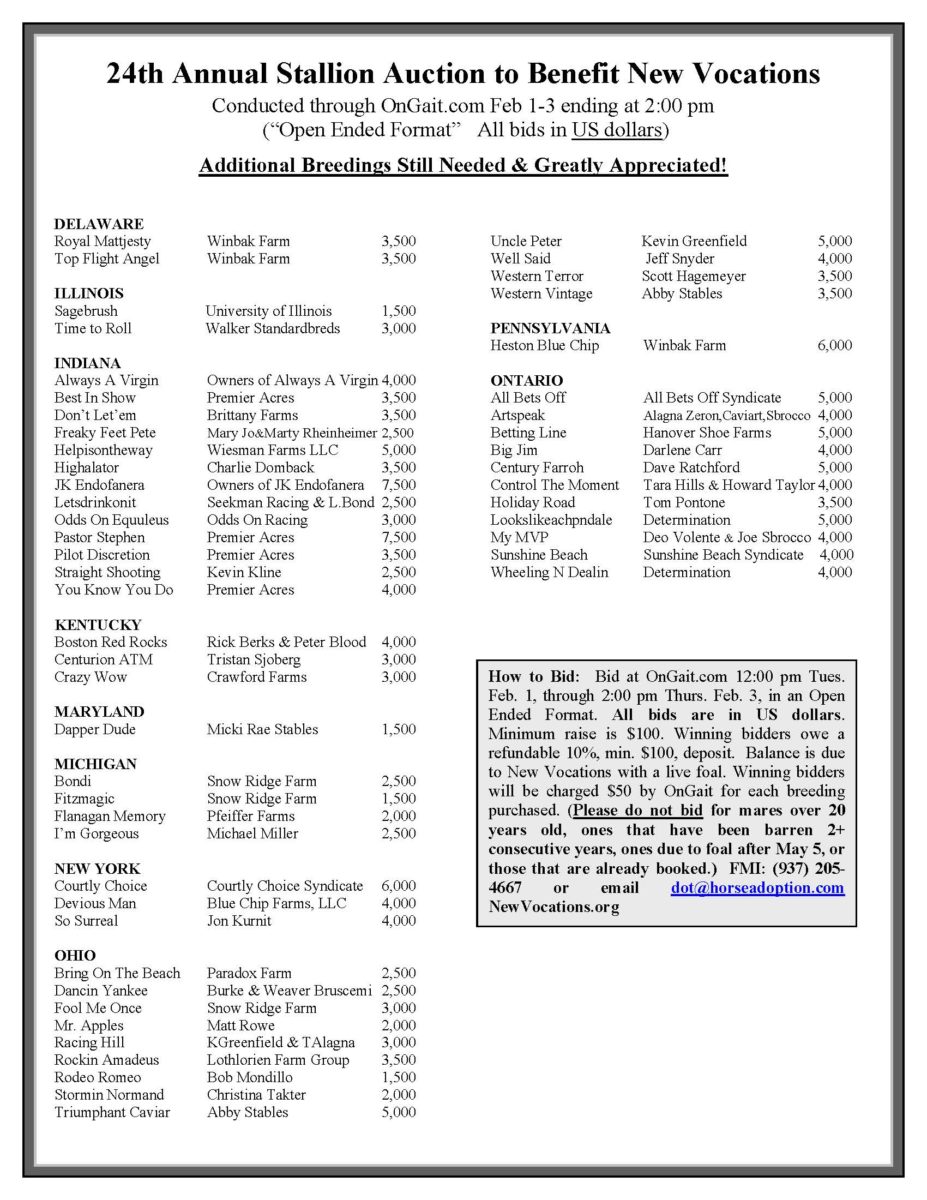 Any way you slice it, the following stars and standouts in horse racing are known more for a loss than any of their victories:

1. ALYDAR had three straight strong seconds to Affirmed in the 1978 Triple Crown. Valiant efforts all. It was maybe the most memorable Triple Crown year ever. Alydar made up for it some by out-siring Affirmed in Kentucky Derby winners 2-0. Plus, they later stood together as sires.

2. C R KAY SUZIE. Unfair as it might seem for a multiple world record holder and a two-time Breeders Crown winner, Suzie faltered making a break in the 1995 Hambletonian elims and did not make it to the final as the overwhelming favorite. Every conversation about her and her career seems to start right here.

3. SOMEBEACHSOMEWHERE. The 2008 Meadowlands Pace was a race for the ages. Art Official edged out SBSW by a neck in world record time 1:47 for sophomore pacers. Incredible efforts by both. But, SBSW never lost before or after — two 10-race winning streaks. He was a standout stallion, too. But just ask Paul MacDonnell which race he is asked about the most.

4. NIATROSS. He was 37-for-39 lifetime, but ask anyone about his career and his falling over the hubrail at Saratoga and his valiant fourth-place finish in the 1980 Meadowlands Pace elimination would likely come up right away. Unbelievable as it might sound, especially when you go undefeated at 2, there’s an air of invincibility that should not be penetrated.

5. FATHER PATRICK. In the 2014 Hambletonian, he started from post 10 and made a break off the gate losing all chance. His stablemates Trixton and Nuncio finished 1-2. Father Patrick was a huge favorite, but his career was a sparkling one both before and after that — and his siring career has seen his first two 3-year-old crops dominated by Greenshoe and Amigo Volo — sons of Father Patrick.

6. NIHILATOR. In the 1984 Breeders Crown, he was upset by Dragons Lair in the final in world record time. His undefeated freshman season — and Horse of the Year hopes — went up in smoke. He is more than likely mentioned more about this defeat — his first — than in victories even though he was the richest and fastest horse in history upon retirement after his Nov. 30, 1985 Breeders Crown win at Garden State Park.

7. WESTERN HANOVER. Great in every aspect. At 2 and 3, in the breeding shed, etc. But, that 1992 Little Brown Jug stands out due to losing by a dirty nose to Fake Left in the final. It cost Western Hanover the Triple Crown. He raced his eyeballs out that day, and it is probably THE race that comes to mind first in his brilliant career.

8. RAINBOW BLUE. She made a break early in the 2004 Mistletoe Shalee and lost any chance. It was the only loss of the season in her HOY campaign that saw her win 20-of-21 times and beat out a Triple Crown winner for top year-end honors — Windsongs Legacy. You know you are truly great when the odd blemish or two sticks first in people’s memories.

9. ZENYATTA. The Great Grey lost only once — by a torturous nose in the Breeders’ Cup Classic. If only Mike Smith had started her up a touch earlier.

10. JATE LOBELL. Finished seventh in the 1987 Meadowlands Pace. It was the onlytime in his two-time division-title capturing career that he missed the board. He was the 1986 HOY runner-up after an unblemished freshman campaign. But, he was off the board in the Frugal Gourmet-won Pace that year and many won’t let Mark O’Mara forget it.

11. DONATO HANOVER. His 19-race winning streak came to an end in his final two career starts — the 2007 Breeders Crown elim and final both won by Arch Madness. Still, Donato Hanover was easily HOY in 2007.

12. NO NUKES. He went to the post just 19 times in his life at 2 and 3 in 1981-1982. He was overshadowed at 3 by Cam Fella. But, nobody can forget No Nukes’ 1981 Woodrow Wilson when, with $1,957,000 on the line, he broke before the gate causing two recalls and then raced as a NON-wagering part of the field before breaking again at the start losing 20-25 lengths-minimum. His mind-numbing comeback to enter the fray at the top of the stretch before calling it a night was legendary. So great, in fact, that his $5 million syndication deal was struck shortly after and that was the bargain of the century.

13. PEACE CORPS. She won four Breeders Crowns and nobody has done that. But, her 1989 Hambletonian is still gnawing at some. She was third overall as the favorite in both heats. That was the Park Avenue-Joe Probe dead heat year. Peace Corps had come in with a 17-race win streak and her driver, John Campbell, had won the previous two Hambletonians.

14. NEVELE PRIDE. This one is patently unfair, big time. His loss to Une De Mai in the 1969 Roosevelt International is almost certain to be in the first or second race mentioned of anyone recounting his career. But, get this, in the 13 days following his Aug. 23, 1969 loss to the great French mare, Nevele Pride posted the following:

1:56.4 over the half mile track at Saratoga six days later.

It took a colt by the name of Mack Lobell to beat the half-mile mark-19 years later.

15. ALBATROSS. In the 1971 Jug, Nansemond won it over Big Bird. Albatross was 25-for-28 at 3, but it seems that Nansemond defeat is front and center when his name — or certainly his 3-year-old season —comes up. I can tell you first hand that this was the race that bothered Stanley Dancer to the end.