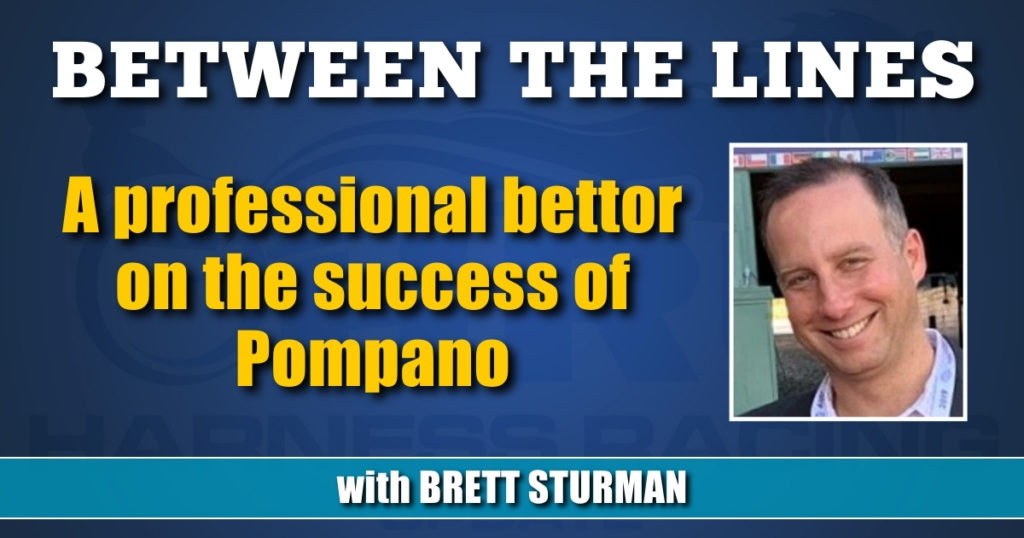 A professional bettor on the success of Pompano

When Pompano concluded its racing season one week ago, handle for the finale totaled a single night record of $1.7 million. It was the 21st time over the course of the season that handle topped the $1 million mark. Prior, the track experienced $1 million in handle just six times total going back close to 60 years.

As director of racing for Caesar’s Entertainment, as well as serving several other functions, Gabe Prewitt noted in a social media post this past week that total handle was a mere $88,469 for his first night at Pompano in October of 2013. But what’s the increase over that time and an even more recent surge attributed to? According to one professional bettor who drives more than a fair share of Pompano handle, it’s mostly a combination of things.

“It’s on the right nights when there’s not a lot else going on,” said the bettor, who asked to remain anonymous. “You kind of gravitate to it because it’s one of the only products out there that has pools you can bet into during the timeframe when it’s on. I’ll give you an example. Pompano gets $40-50,000 in their Pick-4 pools and Scioto has essentially taken over their time slot starting the other day and they had only a $4,000 carryover in their Pick-4 so it shows you the discrepancy in harness tracks that have pool size and the ones that don’t. Pompano gives you opportunities to bet into pools where you can win some money and create some volume in your wagering which most harness tracks don’t offer, especially on off-nights. The Meadowlands offers it on Friday and Saturday, but especially factoring in thoroughbreds, they’re up against a bunch of other signals. But Pompano isn’t up against anything with pool size. Northfield does have some pool size, but not like Pompano does on a consistent basis with the Pick-x’s.”

For Pompano, the transformation from handle under $100,000 to routinely over $1 million was far from an overnight change. It was a gradual process that began to get the attention of this bettor about five years ago.

“When the pool sizes are small you get more carryovers. Albeit small carryovers, but those carryovers will create bigger pools. You kind of just watch tracks and there may not be interest in them when there’s no carryovers but when there is a carryover the next pool is big, so that’s what you look for and that’s what you notice at Pompano. They’ll get $3-4,000 carryovers in their early Pick-5 and then the pool will be $20,000 the next day. You look for pool size and takeout reduction due to the carryover. That’s what gets gamblers to notice your product, then they’ll bet those and other races so it kind of snowballs.”

What the track does between placing its product on the right nights and putting itself in positions to generate more carryovers (real ones, not Jackpots), seems like a simple formula even though most tracks don’t do it. Another example of a simple thing the track does is actively promote on Twitter and boasts low takeout wagers.

“It’s far from a perfect product. They’ve got those amateur races which are the scourge of the earth, but the track gives you opportunity throughout the card,” the bettor said. “The Pick-5 pool is now big enough where it can stand on its own legs without a carryover, but back in the day you needed a carryover for the Pick-5. But even five years ago, Gabe rolled right into a Pick-4 after the Pick-5 and that was big enough then and with a low takeout to play without a carryover. But like I said, it’s a combination deal. It’s on the right nights and it offers pools that are big enough to where you can have interest and win some money, where other tracks don’t do that on a nightly basis.”

For this bettor who firmly believes that tracks have an obligation to not only cater to bettors but also educate them – especially newer ones – that is something that Pompano also does well.

“One of the best things that Pompano does that most other tracks don’t do on a regular basis is that they display the remaining Pick-x money and how much is left in live money after each race of the sequence on their broadcast feed. Every beginning or normal gambler can learn a lot from that.

“I keep track mentally every race how much money has been left live and I keep track of the horses that win and with me it just reinforces the value that I already know is in the Pick-x’s; why this horse and that horse are valuable when they win. If bettors really looked at that stuff, it’s amazing what they can learn. And Pompano puts it up on the screen where it can cycle for seven or eight minutes. The key is that your players can learn from it. I’ll give you an example. Let’s say there is a race where three horses can win. And Wally (Hennessey) and David (Miller) are on two of them. And the one that Wally or David aren’t on – even though they are all the same price as far as win odds – it’s amazing how much value there is in the Pick-x’s when you can get the non-Wally/David horse to win. A few weeks ago, there was that exact situation and the non-Wally/David horse ended up paying a flat $7 to win in the race but paid a factor of 7-1 in the Pick-5. And that’s the kind of stuff you need to know as a gambler, and of course be able to see it before it happens and be able to put yourself in a crushing position. It’s an incredible learning tool.”

For this gambler, Pompano has done a lot of the simpler things right while at the same time doing more than most others to cultivate new bettors. It’s why Pompano has experienced growth.