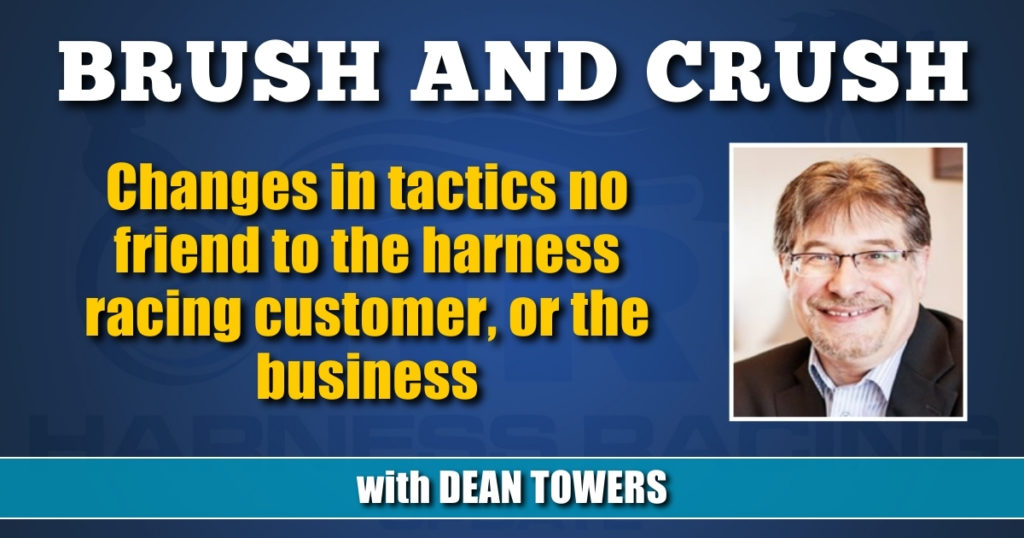 Changes in tactics no friend to the harness racing customer, or the business

This weekend the racing world is filled with Kentucky Derby handicapping. There’s workout watching, form analysis, and for many who want to hit an elusive Derby tri or superfecta, pace projections.

As for the latter, thoroughbred racehorses, as you probably know, race to a running style. “E8” horses will go to the lead, pressers press a lead and stalkers will come from off the pace. Making projections to how a race will be run is handicapping 101, and the jockeys for the most part race their horses based on their style of running, because they really have no choice.

For example, last Saturday evening in the third leg of a $109,000 Pick 4 pool at the Big M, Sweet Lucy Lou was sent to the front and paid $27. The mare won like an 8-5 shot. In her previous races this year she had been no better than second last off the gate – what most would characterize a closer. In addition to the tactics change, it was coming off a vet scratch, and it was a move-up in class.

How could your customer – like the people scouring over Kentucky Derby pace projections this weekend – handicap for this scenario off the past performances? They can’t. And in my view, it’s a bad for the business.

In harness racing today, the sport is more and more reliant on multi-leg wagers and carryover pools; they are driving most of the handle, and your regular customer spends hours handicapping them. When one horse – like a Sweet Lucy Lou – jumps up and does something off form it kills thousands of dollars in tickets and it can leave players scratching their heads. If these horseplayers find this happens too frequently, they naturally become former horseplayers.

As for thoroughbred players (who are very important to harness racing; they are easier to attract because they know horse racing and have cash-filled ADW accounts) they too see this, and it turns many of them off the sport. I wrote a series of articles years ago titled, “What thoroughbred players think about harness racing” and one respondent replied, “I know what a jockey will do with a horse, but drivers in harness racing have so much power they can take my money completely out of a race with one decision.”

In other jurisdictions, this harness racing phenomenon has been on the regulator radar. In Australia, they passed Rule 44 in 2017, which requires the connections of a horse to contact the judges if a change of tactics is going to be employed, so they could let the public know. This rule has since been amended to primarily focus on driver tactics with horses from the same barn in the same race. Australia is a mature gambling market with a lot of competition for the betting dollar; they had no choice but to be proactive with these customer complaints.

Can anything be done in North America? With so many jurisdictions and so many moving parts it seems like a monumental task, however, I believe it should at least be examined. With millions being bet in multi-leg wagers and customers at times finding themselves with ticket confetti through a tactics change, the sport may wake up in five or 10 years and wonder where all that money went.