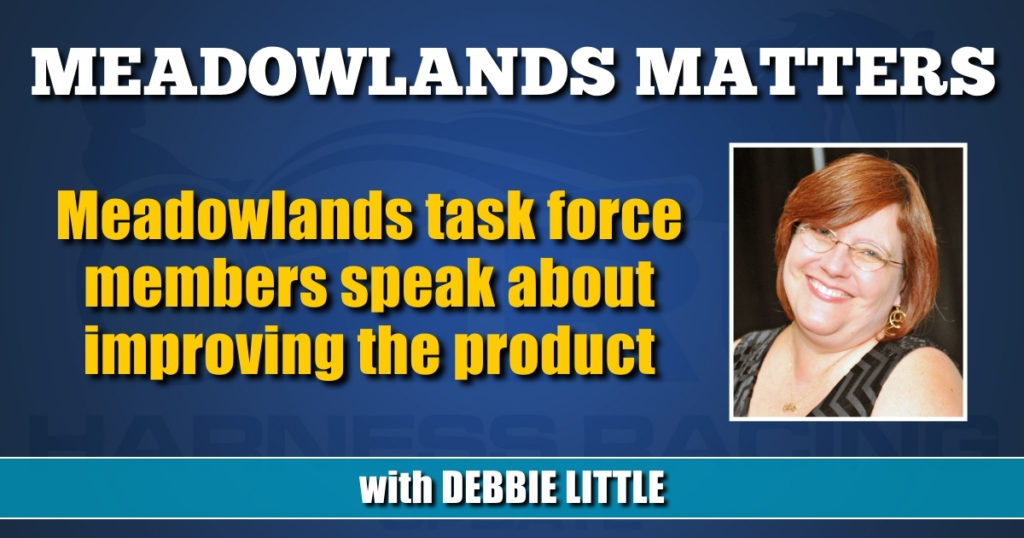 Horsepeople and gamblers also aim for better understanding between the groups.

A new panel has been formed, and it’s going to take The Meadowlands to task.

“The committee was actually Mr. [Jeff] Gural’s idea,” said Meadowlands chief operating officer and general manager, Jason Settlemoir. “Taking recommendations from our customers that pay the bills and then getting input from our industry participants — trainers, drivers that are on this committee — we’re trying to make the product here at The Meadowlands even better than what it is now. And I think our product is pretty damn good and I think the wagering numbers have shown that.”

Their initial meeting was last week via conference call to have a candid dialogue of perceived issues on the track, and since no one on the task force was named, the following opinions are from three gamblers and four horsepeople that all have either raced or wagered at The Meadowlands. To allow these individuals to speak candidly, they will not be named. G1 through G3 will represent the gamblers while H1 to H4 will refer to the horsepeople.

“Having seen that this task force even exists is a breath of fresh air for a gambler,” said G1. “It’s completely unexpected because, being completely blunt, most gamblers feel like they don’t have a voice. Nobody cares. Nobody treats them like a customer and for the most part, they’re looked at as degenerates. So, just the fact that a gambler or more than one has a voice into something as important as this is really uplifting for other bettors to see.”

The task force watch The Big M races each weekend and send notes to committee chairman Settlemoir prior to their weekly Wednesday call.

Even though they discussed more topics, this column will just focus on: courtesy tucks, driving half-in, half-out, and drifting in the stretch, which were mentioned in last week’s press release.

No one contacted for this column had an issue with courtesy tucks.

“They’re not courtesy tucks by any means,” said H2. “I want to beat everybody out there. If we let somebody in, we’re doing it for a reason. We may want to follow them or we may want to get them out of the way.”

It was suggested that the inaccurate name “courtesy tuck” is part of the problem and that “strategy tuck” would be more appropriate, because that’s what they actually are.

“I think for most of the guys, if they’re letting somebody tuck, it’s for a strategic reason, like they want to follow them later on in the mile,” said G2. “It’s not like they’re doing just blatantly weird things.”

In regard to driving half-in, half-out, none of the horsepeople contacted like it.

“It stops and stalls the whole race in the outer flow,” said H4. “If you’re going to move your horse, move him and go. It’s like everybody’s afraid to leave their horse uncovered and they want to wait until the last possible minute to pull. It just clogs up the middle half of the race.”

“Harness racing has turned into a speed-favoring game anyway, so when they’re half-in and half-out and nobody moves, it makes it kind of boring,” said G1. “For anybody that’s been around for a long time, we can remember racing in the ‘80s and ‘90s at The Meadowlands, and if you weren’t out and on the move before the half, you could go from second to last pretty quick.”

Everyone agreed that speed plays a large part in the movement or lack thereof.

“Horses can only go so fast for so long,” said H1. “The horses are so much faster now than they were then. Look at the times compared to what they were 20 or 25 years ago.”

Since today you have fewer lengths per race to close into there’s just a lot less you can do.

“I understand that movement creates a little more excitement but with the new breed of horses and just the way the races flow, it’s extremely difficult to have horses looping around each other at the tempo we’re going,” said H3.

The last item discussed was drifting in the lane.

“A gambler has never driven a horse and he doesn’t know what the horse is doing when he’s tired,” said H2. “Maybe there ought to be a task force to educate the gamblers and let them know what goes on. These are animals, not robots, not machines, not race cars. Some horses when they get tired, they pace or trot better when you can let them drift, but if you try to restrict them, they’re not going to.”

It appears to be the unpredictable nature of the drifting that upsets the gamblers.

“The worst thing about it is the inconsistency,” said G2. “Sometimes you might be behind a dead horse and five times out of six you’ll get through, they’ll drift out and let you up the rail, and sometimes it doesn’t happen. It alters the result of the race. The horse [in the pocket] was in no way going to win unless the horse [on the lead] got completely out of its way to allow it.”

To wrap up, the suggestions were to leave alone the “strategy tucks” and to have the judge’s fine drivers who sit half-in, half-out.

In regard to drifting in the lane, there was some grey area since it was agreed that tiring horses have always drifted out.

“[At Woodbine Mohawk Park], it’s an automatic $200 fine for drifting off the pylons down the lane,” said H3. “In Canada, it’s very enforced. The problem is, tired horses always tend to drift out.”

It is a violation of the driving rule in Ontario to “Allow a horse to pass needlessly on the inside, or commit any other act that helps another horse to improve its position,” thus making it a judgement call which everyone will not always agree with.

“If you have a horse that’s coming home in 30 seconds at The Meadowlands and you’re told if you come off the pylons that’s an infraction, you’re going to get run over,” said H3. “The only reason it should be strictly enforced is when the guy who’s going to win the race moves off the pylons and finishes second because he moved off the pylons.”

The task force will meet through the end of May and Settlemoir is excited to hear what they come up with.

“At the end of the day, to me it’s all about perception and how our customers feel about our product and say about our product that’s important to me and the same thing with Mr. Gural,” said Settlemoir. “We want the cleanest, from an integrity standpoint, and the best racing here at The Meadowlands like we’ve always had and we’ll continue to work on the product to continue to make it better day in and day out.”