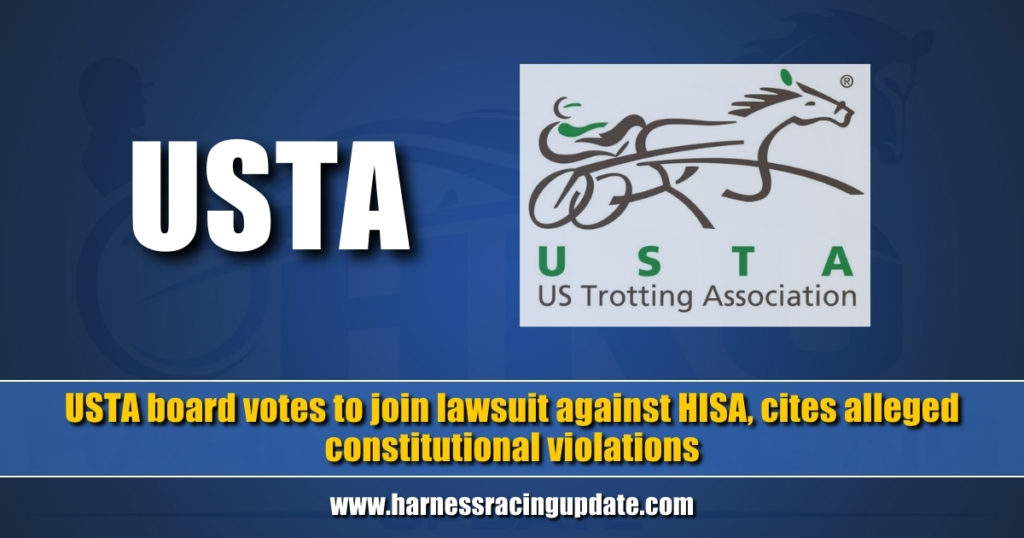 By a vote of 35-8, the United States Trotting Association (USTA) Board of Directors on Friday (April 16) elected to join an upcoming federal lawsuit challenging the constitutionality of the Horseracing Integrity and Safety Act (HISA), which was passed by Congress and signed into law last year.

The USTA repeatedly has expressed reservations about the legislation’s legality, in particular its apparent violations of the Constitution’s non-delegation doctrine and anti-commandeering principle.

In a statement made in September 2020, USTA president Russell Williams said, “The constitutional concerns raised by HISA are substantial and pervasive. Those concerns embrace the structure and powers of the regulatory body at the heart of the bill and extend even to the bill’s more peripheral provisions.”

On Friday, Williams further elucidated his concerns to the USTA board in prepared remarks in which he also assured the board that the Association will assume no portion of the cost of district court proceedings.

If allowed to stand, HISA would remove from the states the power to regulate racing medication and safety matters and give them to a private entity, the newly created Horseracing Integrity and Safety Authority (Authority). HISA is scheduled to go into effect no later than July 1, 2022. The Federal Trade Commission will oversee a rule-making process that eventually will establish and approve the medication control and racetrack safety programs to be enforced by the Authority. The new law stipulates that HISA initially will be funded by loans taken out by the Authority, which will then be repaid by fees assessed to the state racing commissions. No price tag has yet been attached, however, nor has it been determined which segments of the industry will pay for HISA.

The legal action that the USTA will be joining is expected to be filed shortly by the State of Oklahoma and Hanover Shoe Farms. That follows a similar claim against HISA brought last month by the National Horsemen’s Benevolent & Protective Association (NHBPA) and 11 of its affiliated state organizations. That suit, filed in the Northern District Court of Texas, alleges the law creates a private organization and gives it federal authority, which it claims is unconstitutional.

An attendance and voting summary appear below. A “yes” vote reflects support for joining the lawsuit, while a “no” designation indicates opposition to doing so.

*Two votes from directors who were confirmed to be present on the call but experienced technical difficulties in being heard were added to the final tally.