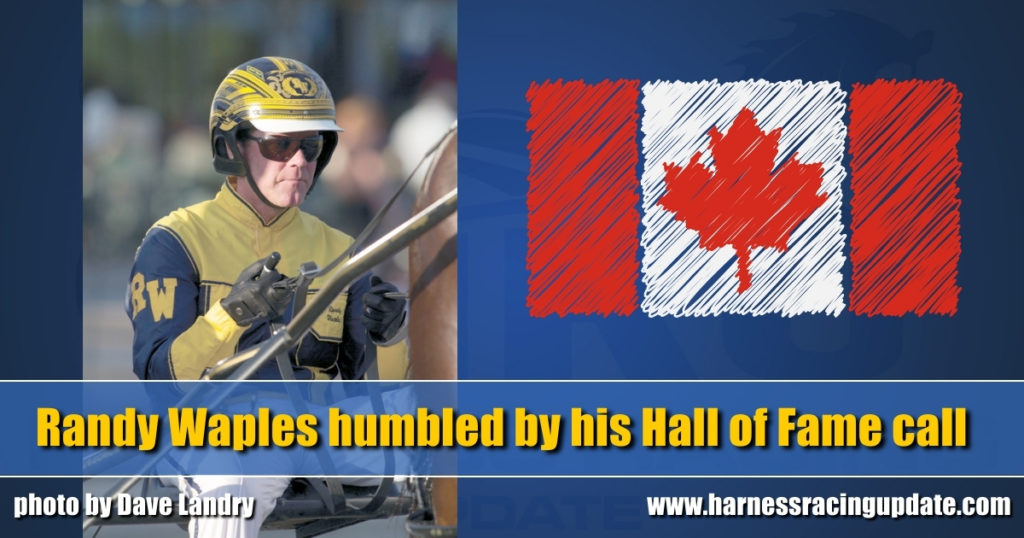 Randy Waples humbled by his Hall of Fame call

The recipe for whipping up a Hall of Famer? Driver Randy Waples said in his case it involves heaping amounts of brutal honesty, several dashes of self-doubt, one sizeable chip on his shoulder and a couple of dollops of trying to prove he is half as talented as his legendary father, Ron Waples.

What Randy won’t tell you is that his self-made humble pie also contains a generous helping of God-given talent and passion courtesy of his legendary family that includes his father’s just-as-fabled cousin, Keith Waples.

“I see Keith, I see my dad. I see Buddy Gilmour. I see Brownie (Doug Brown) and (Steve) Condren and Bill Gale and Dave Wall and John Campbell and Bill O’Donnell and Mike Lachance… Every single guy that I looked up to in my life, as a driver, is in that club and it just feels like I’m somehow picked the lock into this club and got in there,” Randy said Friday (April 16), four days after it was announced he was one of three standardbred inductees to the Canadian Horse Racing Hall of Fame (CHRHF) from the class of 2021.

“I could never put myself in their club. I know I’ve had a great career and I’m more than proud of the way that my career has gone and I’m more than happy that people think enough of my career that they would put me in there, but I, myself, looking in a mirror, could never put myself in the league with those guys. They were all the guys that I worshipped, every single one of them.”

Randy, a three-time Canadian Driver of the Year, is the all-time leading money-winning driver of races held in Canada, sporting more than 6,600 wins and $131 million in purse earnings.

He has a long list of stakes victories on his resume, including: the 2012 North America Cup with Thinking Out Loud, three Maple Leaf Trot wins with San Pail (CHRHF Class of 2016), as well as Breeders Crown championship wins with San Pail and Dreamfair Eternal (CHRHF Class of 2014) and two wins in the Canadian Pacing Derby with Strong Clan (1997) and State Treasurer (2016). Other notable accomplishments include: four Battle of Waterloo wins and leading driver in Ontario Sires Stakes earnings in 2001, 2002 and 2010.

In April 2018, when harness racing moved from Woodbine to permanently reside at Woodbine Mohawk Park, Randy was declared the all-time leader in wins at the Toronto facility with 2,605 victories.

Fast forward three years to the day he received the call that he had been elected to the Hall of Fame. “I didn’t sleep for two days and I’ve been in a very good mood ever since,” he said of being informed of the honor.

That he has boyish excitement over his impending induction isn’t surprising — he is one of the sport’s more passionate drivers — but it does belie his persona as one of the bad boys of harness racing.

“The whole thing is a shock,” Randy said. “Come on, we know who we’re talking about here, but my only saving grace was that I kept thinking, ‘If they let John McEnroe in the tennis Hall of Fame, then there still might be a chance for me.’”

Randy has long said the game needs villains if for no other reason than to provide better entertainment. He was happy to play that role.

“I believe in traditionalism to a certain point, but if you don’t give people something to be entertained by, they are not going to be entertained and that’s all there is to it,” Randy said. “That’s what wrestling is about, that’s what TV is about and we have such a huge opportunity right now with all of these sports being shut down.”

There was a time when Randy was notorious for his battles with judges, mostly the result of his deep honesty streak and hotheadedness. He was suspended in Ontario with some frequency and banned from driving in New Jersey because of his troubles at home.

“One time, I had to go drive Dreamfair Eternal at Pocono and that was still when that whole thing of not being allowed to drive in New Jersey was going on. They didn’t say no, but they told me I had to bring down a copy of my fines and suspensions and it fit into a whole manila envelope,” Randy said, laughing. “There was some 60-some pages, and I turned it over to him and he just looks at it and he looks at me and he goes, ‘Is there anything in here involving race fixing?’ and I said, ‘No.’ He goes, ‘Okay, that’s alright then.’ But it was 60 pages!”

Far from a driving prodigy, Randy said he took a “meandering path” to the Hall of Fame. Though he started driving at age 18, he was almost out of the game before age 30, right around the time Toronto’s Greenwood Raceway ceased operating and harness racing made its debut at Woodbine Racetrack in 1994.

“You can even look on my stats, there’s a space in there when I only drove maybe 90 races and it was in that stretch when I had more or less given it up,” Randy said. “The biggest factor in my career was (trainer) Fred Hoffman. He gave me confidence. I did not want to drive anymore. I even argued the point with him a couple of times. He said he was going to put me down and I’m like ‘Don’t do it.’ I said, ‘Start at the top of the list and work down, but don’t use me.’ He fooled me into driving one at Flamboro and then he started sending me to drive a few at Buffalo and they started to win and then we’d bring those ones back to Flamboro and they won. If they were still winning at Flamboro, then he’d bring them back over for the winter meet at Woodbine and he’d leave me on them and they’d win and then my confidence just kept rolling, because even if I made a mistake or something, he’d never come down on me.

“I was in his barn every morning and you’d think if you had cost him a bunch of money the night before, he’d come in and pull you into the office and he was never, ever like that. So, I just got confident and more confident and then it just started to snowball from there, so maybe there was just something always inside of me and it just never really came flying out before. I don’t know.

“I think that’s the biggest key for any driver is that they have to be confident in their own abilities to make a split-second – you know, not even, a thousandth-of-a-second decision — and stand by it or change your mind in the next thousandth-of-a-second and come up with a better decision. To me, that’s the biggest thing and he gave me the ability to change my mind and if I looked bad, I looked bad, but he never held it against me. He really helped me immensely.”
Randy said his self-doubt actually played a major role in making him the driver he is today.

“It made me get up in the morning. I always had it in the back of my mind that I’m going to lose all these drives and I’m going to lose the stables and I’m not going to win any races… I think it got me in the gym when no one else was really in the gym at that time. It got me into Fred’s barn and still going into Fred’s barn even when things were really rolling for me and I was doing two tracks. I still felt like I had to be in his barn because there was always that self-doubt. If you slow down, it’s all going to slow down, it’s all going to go away, so I would just keep pushing myself and that’s what it came down to.”

Add to that trying to live up to a legendary father and Randy doubled his work ethic.

“That’s probably one of the biggest factors that ever pushed me forward in any of this, wanting to someday maybe be half as good as he was. He was incredible,” Randy said.

Randy said he was served particularly well by a key lesson from his father.

“I just wasn’t scared to say that I was wrong. It was really one of the only pieces of advice that my father gave me when he left to go to New Jersey. He said, ‘Just be honest with people. Sometimes it’s going to cost you a drive, but if you’re honest with people sometimes that drive will come back and if not there will be another one.’”

Despite the external and internal battles, Randy said one of the few places he felt at total peace was on the racetrack.

Randy said the first great horse he drove came in the early 1990s when his brother, Ron Waples, Jr., put him down to drive trotter No Sex Please (CHRHF Class of 1993).

“Other than San Pail — and this isn’t making light on any of the other great horses or the opportunities that I was given — probably the biggest honor for me was when Jr. put me down on No Sex Please. That was huge to me because it had never been discussed or talked about or anything, just one night Ronnie came up to me and just asked me if he could start putting me down on that horse… When he put me down on him, that really meant a lot to me. Let’s face it, he was a great horse, so it’s not like you’re getting put down on some average kind of horse, you’re getting put down on one of the best… I was real young then, probably 22 or 23, that was a huge, huge honor. I don’t know if he ever knew that he stoked me up that much. I don’t know if we ever talked about it, but that probably sticks out huge in my mind.”

In 1997, Randy had his first huge win when he won the Canadian Pacing Derby with Stew Firlotte-trained Strong Clan. On the way to the winner’s circle, Randy stood up in the race bike like Herve Filion and caught hell from the judges.

“I still watch that replay every once in a while, just to listen to the screaming,” he said. “If someone was to ask if that was the greatest race I was involved in, I would have to say that was it. There was a lot of pressure on him and he had Horse of the Year waiting on it. He was still ‘the Canadian trotter’ that had to win just about everything to be accepted as Horse of the Year. I mean, up here, he had it pretty well sewn up, but maybe not so much in the U.S. If you can have a fantastic year and finish it off with the Breeders Crown, then there’s a pretty good chance you can do that. All of that was going in my mind, too.”

When it comes to the Hall of Fame, no career accomplishment can top it, even if Randy Waples still has trouble believing he is worthy.

“You’ve got idols and guys that you never feel you’ll be close to as drivers and then all of a sudden you’re in there with them,” he said. “It’s so humbling and exhilarating and pumping that I’m a part of it.”

— with files from the Canadian Horse Racing Hall of Fame