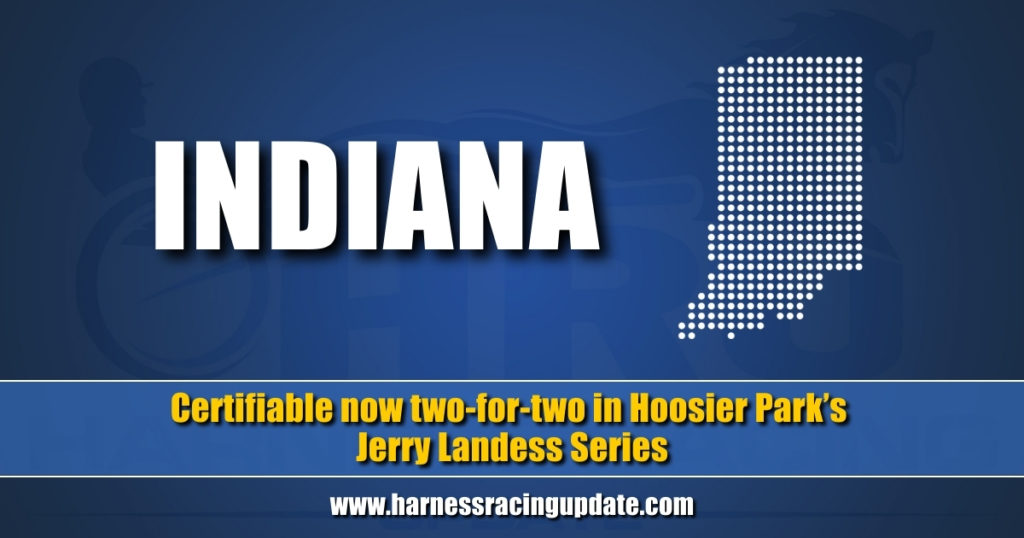 Each season, Harrah’s Hoosier Park plays host to early closing series for unraced, lightly-raced, or lower-tier freshmen turned sophomores. Inevitably, some of the pacers and trotters that impress in April go on to make an impact in Indiana Sires Stakes competition. After two rounds of action in the Jerry Landess Series, 3-year-old gelding Certifiable has shown he possesses the talent to move forward. Friday night (April 16), he cut the mile and scored in 1:52, securing his second win in as many starts for trainer Erv Miller.

“I really liked him last year because of his gait; he’s just a beautifully-gaited horse,” said Miller, who owns Certifiable in partnership with Louis Willinger of Louisville. “Early on, I could tell his attitude was okay.”

While his attitude was okay, the son of Rockin Image—Psychotic was not yet ready to compete. Instead of rushing the pacer, a $20,000 Hoosier Classic purchase in 2019, the veteran trainer chose to give him time.

“He was just a real immature colt last year. I could just tell he wasn’t going to be able to do it last year. We ended up turning him out pretty early and just letting him grow up,” he said. “So far, he’s paying us back for doing that.”

At Southern Oaks Training Center, Certifiable registered one qualifier before shipping north. There, he was a gate-to-wire winner, stopping the clock in 2:00. Miller typically preps a horse with more than one qualifying race, but the timing didn’t work out for this sophomore before his Hoosier Park debut.

“I didn’t want to go too much down on the clay track here at Southern Oaks, that’s why we just went that one time and I trained him a couple more times before we shipped up there,” the conditioner said. “He doesn’t do much and it’s pretty easy training the horse. He’s really easy on himself, a real smart horse.”

Only having one qualifier didn’t seem to present any issues for Certifiable. Guided by the track’s perennial leading driver, Trace Tetrick, the gelding sat in the pocket in an opening round Landess Series division April 9 before kicking clear by more than two lengths. He stopped the clock in 1:53 in his first pari-mutuel effort to earn the win.

Friday night the gelding drew into the last of three $9,000 Landess divisions, assigned post five. With horses scoring down only minutes from the start, the field was summoned to the paddock. When the ambulance stationed trackside responded to a medical emergency, racing was halted until it could return. The wings folded on the starting gate 20 minutes later, with Certifiable and Tetrick pushing to the lead. Unfazed by the delay, the tandem would set fractions of :27.2, :57 and 1:25.1 before pacing home in :26.4 to triumph by a length and a quarter. Luc Rocks and Ricky Macomber dashed home in :26.1 to finish second while second choice Saddle Up and John DeLong raced third.

Miller didn’t stake the sophomore to a lot, but he did make Certifiable eligible to the open stakes at Hoosier Park. Between Indiana Sires Stakes and the open stakes at season’s end, the pacer will have plenty of chances to face tough competition and add to his now-small bankroll.

“It’s hard to stake them a lot when they don’t race at 2, but we did; we jumped out there a little bit on him,” he said.

A full brother to Indiana Sires Stakes-winning mare Letme Fly Low, p,4, 1:50.2s ($256,302), a horse Miller bred with Mystical Marker Farms and Peggy Hood, Certifiable has shown speed, but so have others in the Landess Series. Friday night’s division winners also included fellow Rockin Image product This Kit Rocks (1:52.2) and Jk Endofanera gelding Caption This (1:53.2). Miller said he feels his charge can take the next step, but he is not overlooking the group Certifiable is in against at the moment. The $18,000 Landess Series final will take place this Friday (April 23).

“Even the final there is going to be a step up when they get all those colts in there together,” the trainer said. “He’s just learning. He’s just getting started. I think we’ll see better things of him yet.”