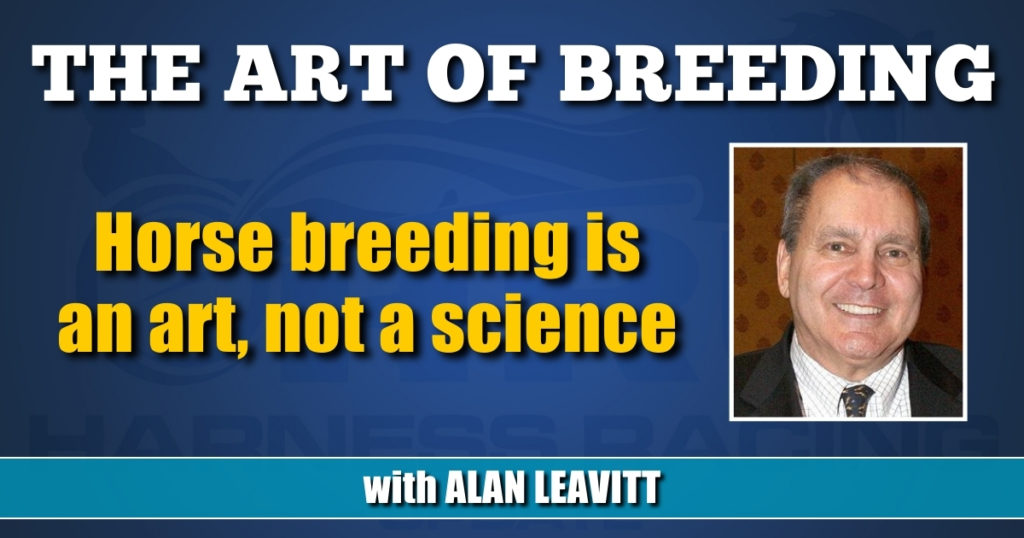 Horse breeding is an art, not a science

Through a lifetime of study and experience, I have learned that the best indicator of a stallion’s sire potential is racetrack brilliance at 2. Playing supporting roles are physical qualities such as sharp-headedness, good, big eyes, and sharp use of ears. Physical size also plays a role, in that for me, I’m leery of horses that are over-sized or dramatically under-sized. In genetic terms, all of these qualities constitute the phenotype, or visible qualities. But equally significant, in genetic terms, is the genotype, which is the genetic makeup of the horse, and it is invisible.

I was fortunate in having a long-term relationship with James C. Harrison, unquestionably the smartest man I ever knew in the horse business, or anywhere else, for that matter. Jim wrote the first chapter of the original Care and Training of the Trotter and Pacer, and in it he explained equine genetics better than anyone else, before or since. I am going to reframe his thoughts here, with a little of my own thoughts thrown in.

Equine genetics is a subject we know the least about, and every point one can make about it is only deductive, or after the fact. Yet, it is the most important single element in breeding horses.

To get down to cases, the dominant trotting sire today is Muscle Hill. True, he was a great colt trotter, winning everything at 2, but so was Deweycheatumnhowe. But today, Muscle Hill’s breedings are the most expensive and sought after in our sport, while you can hardly give away a breeding to Dewey. While their phenotypes are obviously similar, which explains how both of them were great on the track at 2, their genotypes, the invisible genetic make-up of each horse, are totally divergent.

To understand better a stallion’s genetic makeup, Jim’s example of a deck of playing cards works well. Imagine the range of the gene that represents the ability to sire trotting speed, running from 1:48.4, the world record, to 2:05, which is too slow to meet any current track’s qualifying standard. Transpose that range to a deck of playing cards, with Two representing a siring time of 2:05, up to the Ace, representing the ability to sire 1:48.4 speed.

Imagine that every standardbred mare also has the same genetic range, which only makes sense, and her deck also runs from Two to Ace. At the time of conception, every horse’s genotype, or genetic makeup, is created, with equal input from both the sire and the dam. Since the average card in a full deck is Eight, you could expect an average resulting foal, with the ability to trot around 2:00.

But that’s not how it works. Every stallion and every mare contributes a different speed gene, or card, to every conception. And here’s what makes Muscle Hill a great sire, in my reckoning. Although he theoretically has a full range of cards, or speed genes, in actual practice he mainly deals from the top of his deck. I can imagine that, in these terms, the lowest card he ever throws is a Ten and most of them are Jacks, Queens, and very occasionally a King. Thus, whatever card the mare contributes to the foal the two of them conceive, their foal is going to have a faster speed inheritance than the average foal sired by a stallion sans the use of any face-cards in his genetic deck.

That, in a huge oversimplification, is why one can reasonably expect any foal by Muscle Hill to be faster than the average foal, and if he gets any kind of help in the speed inheritance department from the mare, the foal will be exceptionally fast.

At this point, you probably need no help from me in figuring out why Dewey has been such a flop. Clearly, he routinely comes up with a low card, or slow speed gene, most of the time. He can sire a fast horse on the infrequent occasion when the genetic gods smile on him and he passes on a fast gene. But they don’t smile very often. Yet the fact remains, that on the racetrack at 2, Dewey was every bit as good and successful as Muscle Hill. His phenotype, in technical terms, was great. But his genotype was the opposite, which is why so many of his progeny are pulling Amish buggies.

Clearly there is a need to identify the visible and knowable qualities, such as pedigree, in the broodmare, but that is a subject equally complicated, and for another time.

It’s possible that someday there may be a scientific way created that will help to shed light on the genetics of our beautiful breed. But somehow, I doubt it. For me, horse breeding will always be an art, not a science, and art is always, at bottom, something unknowable.