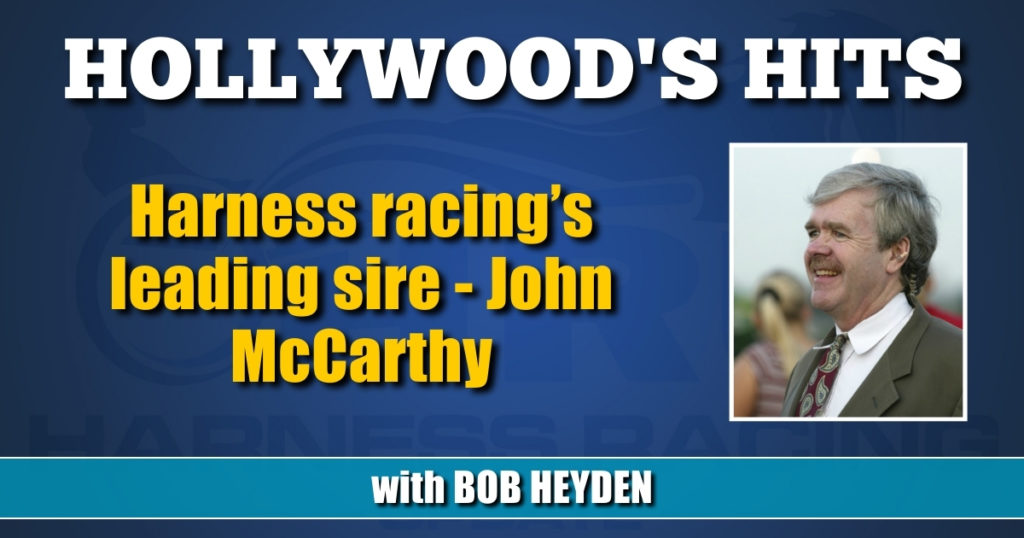 Harness racing’s leading sire over the past 18 months is not Muscle Hill or Bettors Delight. It’s John McCarthy, father of horsemen Luke, Todd and Andrew McCarthy.

Has any father ever been on a roll like this? Consider:

Todd came to North America last fall and quickly established himself as a go-to guy. He handled Anoka Hanover, the 2YOFT of the Year and dominant winner of the Goldsmith Maid. This year, Todd is 93 20-20-12 for an amazing .378 UDRS at Yonkers through March 29 and at the Meadowlands has a 291 36-34-28 slate good for $430,000 through the same date.

Luke, the leading trainer at Menangle, just won his second straight $1 million Miracle Mile driving King Of Swing and he also was second this year going 1-2 (Expensive Ego is trained by his wife, Belinda) It’s the seventh time a horse has gone back to back in the Miracle Mile, but the first time a father and son have each done it. John himself did it in 2005-2006 with Be Good Johnny. Luke is also.

Andrew won four Breeders Crowns in October, 2019 and is the only driver to win four or more in any Crown year with fewer than eight drives (he had seven that year). Andrew came back in 2020 to win the two richest races in North America — the inaugural Mohawk Million for freshman trotters with Venerate and the Hambletonian with Ramona Hill. This makes Andrew the first driver to win million-dollar trots with a 2- and 3-year-old in the same year.

In 2020, three of the four Dan Patch winners among the 2- and 3-year-old trotters were driven by either Andrew or Todd.

John McCarthy, 62, has over 2,200 career wins. He resides in Cobbitty, Australia, currently trains 14 and drives 4-5 times a week. He and wife Narelle also have a daughter, Jodie, who was also involved in the sport before becoming a physiotherapist that travelled as the head physiotherapist for the Samoan National Rugby Team in 2012-2013.

Recently, John took time to speak about each of his driving sons.

“In 2009, Luke rang us all excited when he got the opportunity to drive Muscle Hill in the World Trotting Derby,” John said. “He couldn’t call us before the race because had just found out and had a considerable drive to get (to DuQuoin. Brian Sears was waiting to drive Muscle Hill, but rains delayed the entire card for hours and Brian had multiple drives in Canada on their big night). It was really special. When Luke arrived there in North America — he was the first of my boys there — he didn’t have a lot of luck. Here, he races at 3-4 tracks: Brisbane/Queensland/Victoria. But he does his best at Menangle. Luke told me that someday he’d like to go back to the States and give it a shot. I just don’t think that is going to happen with the size of the barn here and all.”

“When Andy first went over, he started with nothing really. He did a lot of shoeing and had the occasional drive. Noel Daley was one of the people who helped him — helped all the boys. Without Noel’s help none of the boys would ever have gone to North America. He doesn’t get enough of the credit. Watching Andy win the two biggest races last year was quite a thrill. Andy more or less made it on his own. He’d be a good trainer, too. He likes that. He’s very good. One day I could see him training only, but that is well down the road. Both wins last year in the Mohawk Million and the Hambletonian came with trotters. He didn’t have a lot of experience with trotters when he left here. He had to work at it. But he’s got good hands. Top drivers drive with their hands, average drivers with their shoulders. Funny that Andy met a girl there — Katrina Shand — and both of her parents are from Australia. Katrina is very, very good at face-timing us with their two boys. We haven’t seen them in three years. We planned to last year but with COVID had to wait. It is definitely something we want to do this year and have an extended stay.”

“Todd always wanted to drive, from when he was very little. He told me that if I ever plan to sell the farm-it’s okay — he doesn’t want to train. He has a similar driving style from Menangle that has been successful for him since he arrived. It’s a good clean track here at Menangle — pretty much one lap. He could judge speed really well. Todd was maybe the most eager of the boys to go.”

Were you surprised Todd did as well with the 2 Year Old Filly Trotter Anoka Hanover?

“Yes. He had no experience with young trotters here. There are no 2-year-old trotters here. He was a little bit nervous going behind the gate with her, I know that. He did a good job. Remember that he represented us in the World Driving Championships. He didn’t have a lot to drive, but the experience was good for him. He was only 21 when he finished 2nd in the Inter Dominion with Seal N Print. He was trainer and driver and 50 per cent owner.”

What about the differing styles on the two continents?

“Todd always leaned back. Since he was 10, 11 years old. That style is very common up north. He would get $4-5 thousand a year in fines here. Luke sits straight up.”

How do you keep up with all the racing?

Why are your three sons all so successful? What is the commonality here?

“The farm where they grew up had something to do with it — in Queensland. Sand track, 600 meters, deep. Horses galloped a lot. You had to learn how to hang on. From a physical point of view, you had to hold the reins a certain way. Get the feel of a horse. They all had the knack.”

Are you surprised at how well Dexter Dunn has done since his arrival?

“Not really. He used to drive in some featured races in New Zealand with the boys. They were friends long before they got to the States.”

Why have so many Down Under breds done so well in North America the last half dozen years or so?

“They go better on Lasix, for one thing. You have a horse like Bettors Delight doing both continents. He’s the best there is. The 2- and 3-year-olds are not rushed along here at all. Sometimes they won’t even get started until late at 3 or 4. We’re a little more patient here. Longevity is the key here. They will wait much longer on a horse here — and a sire.”