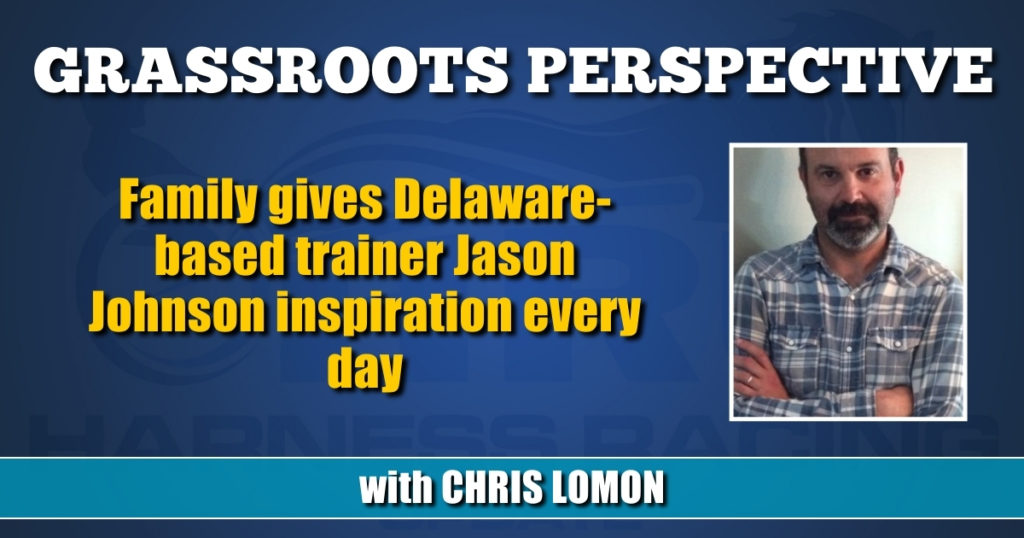 Jason Johnson doesn’t always hear the cheers, but he knows they are there.

Whenever one of his horses hits the finish line first, the trainer’s smile lasts nearly as long as the time it took to run the race.

He has good reason to sport that big smile.

“My family are my biggest fans,” said the Delaware-based horseman. “Having them on my side gives me inspiration every day. Even on a bad day, they can pick me up. When a horse of mine wins, I know they’re excited for me.”

Support, from his wife Amy and their children Jayden and Ava, along with backing from friends and horsepeople, has been a staple in Johnson’s career since the day he began his life in standardbred racing 13 years ago.

“I grew up in the business even though I never started training on my own until recently. My brother [Mike Johnson] and I are 18 years apart and when I was younger, he had horses with George Teague Jr., George Dennis and Eddie Dennis. My parents [Stan and Pat Johnson] took me to races almost every night, Harrington Raceway, Dover Downs and good old Brandywine Raceway. I actually learned how to read via the race program.”

That early horse racing education, unbeknownst to him at the time, would help galvanize a love for the game, and eventually lead him to the racetrack looking for work.

“I’ve been lucky enough to work for top trainers around our area, people like George Dennis, Josh Green, Kevin Lare, Trish Foulk and Ed Gannon Jr., where I was able to learn different styles of training from each one.”

They weren’t the only ones to take notice of Johnson’s talents.

In 2020, he was named as the recipient of the Delaware Standardbred Owners Association (DSOA) James T. Case Jr. Horizon Award, an honor given to a rising star in the industry.

“I got a letter in the mail from the DSOA telling me that I had received the award. That’s how I found out. It’s a good feeling to be recognized, especially for something that you love doing.”

It’s been over the past few years where Johnson has felt he’s hit his best stride as a trainer.

“I’ve been on my own for about seven years, but it’s been the last few years that have been really good to me. A few years ago, Dave Neilson sent me a couple of really good horses. One of them is Need Luck [an eight-year-old New Zealand-bred trotting son of Great Success]. We got him going.

“I would say Tour De Lindy [a 7-year-old trotting son of Lucky Chucky] is the highlight. He was bought out of the Mel Hoover Amish Sale and cost around $10,000. I trained him down and he really took off for us. He had a good year in 2020, even with COVID shutting things down for a while. He made close to $60,000, which was nice to see. I also have a new owner, Josh Graber, who I picked up last year. He sent me a couple of trotters and some others as well. Another one of his, Somebaddude [a 6-year-old son of Somebeachsomewhere], came to me this January. His first few starts were a little rough, but he finished second in 1:49.4 on March 25 [at Dover Downs]. It was an impressive race and it looks like he’s really rounding into form.”

Johnson doesn’t need to be racing to enjoy the sport.

“I watch races every day, even when I don’t have any racing. I look at the horses and I study them. I look at the equipment they’re wearing – this one has a hood on, that one has an open bridle – I really look at everything. And it’s not just the local racing that I watch. I watch races from everywhere.”

Currently, Johnson has 14 horses – half racing, the other half training back – in his stable.

Closing in on 200 career wins, the 39-year-old is working as hard as he ever has, eager to continue his stable’s winning ways.

He hasn’t forgotten what it took to get him there.

“I like the industry as a whole. It’s kind of laid-back, in that you do your own thing. It’s long hours. You work early in the morning and then race at night, but every day is different. That’s what I like about racing. Nothing is ever the same. You learn something new every day… actually you might learn something new every hour. I just love what I do. I guess the only difficult part of this job is that it takes you away from the family a bit, which isn’t easy.”

For Johnson, it’s tougher than most.

His youngest daughter, 21-month-old Jayden, was born with a congenital heart defect.

She has already undergone three surgeries and has another procedure scheduled near the end of 2022 to have two valves replaced.

“Everything is good right now. We haven’t been able to go as many places because we don’t want to her get sick, especially now with COVID. That could take a big toll on her, so we don’t go too many places. We’ll go out for walks and she comes to the barn a lot. Both of my daughters love the horses. It’s going to be a long process for Jayden, but so far, knock on wood, everything has been good. The biggest thing is to make sure she doesn’t get sick. We’re doing everything we can so that doesn’t happen. We’re staying strong as a family.”

Thanks in large part, noted Johnson, due to his better half.

“I really need to give a shout-out to my wife for keeping things in order around the house and taking care of the kids since I’m at the track most nights. Right now, I’m just racing at Dover Downs, so it’s not so bad. But traveling will be on the horizon soon and I’ll be going out of state at times, to places like Chester, Pocono and possibly, The Meadowlands.”

Whenever he hits the road with his band of trotters and pacers, he’ll be reminded of the support that waits for him back home.

And whenever he wins, he knows he won’t be the only member of his family celebrating.

For Johnson, that’s always something worth cheering about.