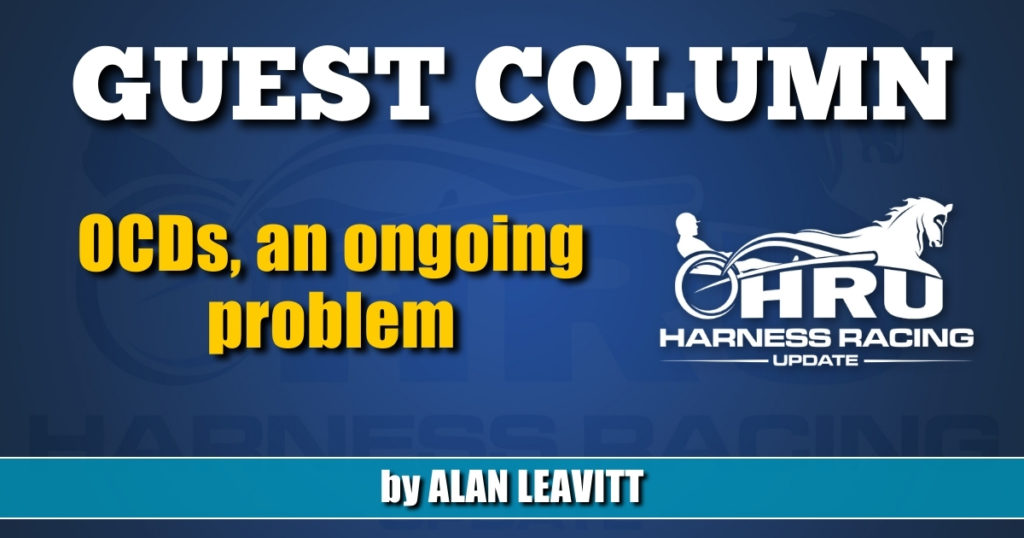 Osteochondritis Dissecans, better known as OCD’s, are the bane of every yearling breeder’s existence. If you are a market breeder and you bring a well-bred yearling to one of the big sales, he or she has to radiograph clean or you’ll take a big discount.

In simplest terms, an OCD is a bone lesion. It can pretty easily be made as good as new by a competent equine surgeon. This kid was fortunate enough to hook up with one of the greatest equine surgeons in the world shortly after we created Walnut Hall Ltd. That was Dr. Larry Bramlage, and my friendship with him has been a high point of my life in the horse biz.

Dr. Bramlage explained to me what an OCD was, how it could be made perfectly whole and sound, and, that a horse would not ever develop one after the age of 12 months. So, as he directed, here at Walnut Hall we have every yearling’s legs and stifles radiographed by Dr. Elaine Paasch, an associate of Dr. Bramlage and Dr. Ruggles at Rood and Riddle, and then one of those two great surgeons “fixes” any OCDs that the x-rays reveal. (At the same time, any chips that show up are also removed).

We learned the hard way that 12 months is the cut-off time. One year, by mistake, our then resident vet did the survey radiograph before the start of the breeding season. As a result, three yearlings that x-rayed clean at nine and 10 months turned up with OCDs when potential buyers took pictures at the sale.

The answer to the question of how to avoid OCDs is totally beyond me, despite a good deal of layman’s research and reading on the subject. The prevalent school of thought is that OCDs are present at birth. However, there are some — admittedly only a few — who posit that they are created at conception. I go with the theory that they occur at birth, which at least gives you something to work with.

What that leads one to is a new subject for horse breeders, but one we should all be aware of. That subject is Epigenetics, which is the science of change. Technically, this is the study of change in horses that does not involve change in the animal’s DNA.

Where Epigenetics comes in when you’re trying to figure out why your yearlings have OCDs involve what’s going on with the dam during gestation. The first obvious subject here is what the mare ingests during pregnancy. There are some good clues here, if only someone will look hard enough. There’s the question of vitamin and mineral supplements, of what hay is best, what grain. Maybe if a mare only ate grass, as in the natural state, for her whole pregnancy, her foals would be OCD free.

Then there’s exercise. Should a mare stay outside 24/7, right up until she foals? Does being stalled for 8 hours at some point have an effect that causes OCDs? Of course, aside from Epigenetics, there is also the question of genetics themselves — do some studs sire foals with OCDs, and if they do, is it the same with every mare, regardless of her pedigree?

This is a serious subject that deserves serious research. It would be wonderful if some group devoted to the betterment of our beautiful animals would put up the funding for the necessary research. But until that blessed day comes, we’ll keep radiographing all our yearlings when they hit 12 months of age, and I suggest you do the same.