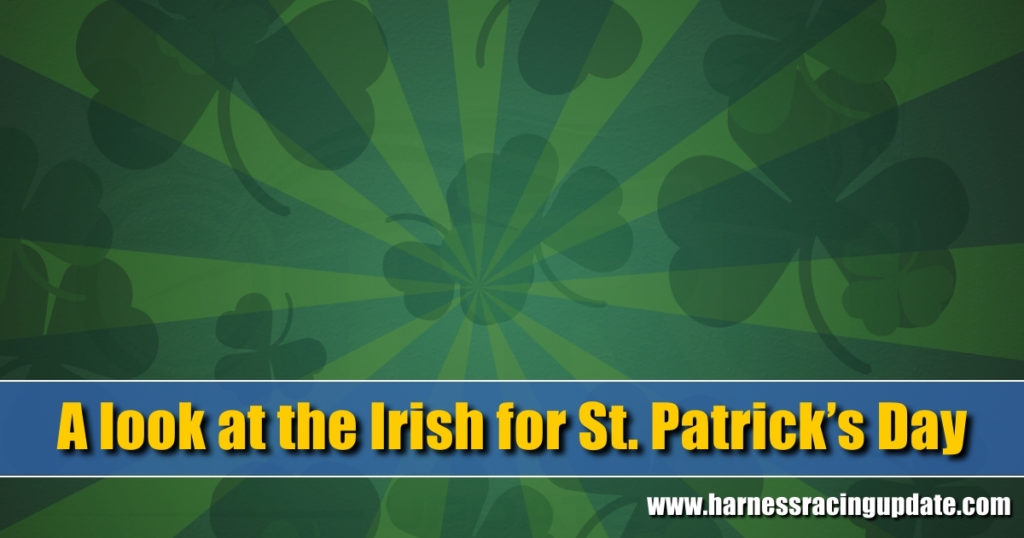 A look at the Irish for St. Patrick’s Day

On the day when everyone and their mother is Irish, Harness Racing Update has caught up with three sons of the Old Country who are plying their trade in the North American racing world.

St Patrick’s Day typically falls on the biggest week for thoroughbred racing on the far side of the Atlantic Ocean. The Cheltenham National Hunt Festival in England will see dozens of Irish hopefuls make the trip across the Irish Sea in a bid to bring home some of the most coveted silverware in the game.

This year, it also happens to mark the week the Irish harness racing season gets underway. The first card of 2021 is down for decision this Sunday (March 21) at Portmarnock Raceway, Dublin – a venue at which all three of our interviewees spent much of their misspent youth.

Wherever in the world you find racehorses, you will generally find an Irishman not too far away. The harness racing circuits of Canada and the U.S. are no different.

Anthony Haughan (45) from Dublin, based in Ontario over 20 years.

Haughan has been in Canada longer than he was in the Motherland, and together with his better half, trainer Meg Crone, he races a mid-sized barn from Classy Lanes Stables.

“We have 12 in the barn right now,” he said, “but at this time of year your numbers go up and down, depending on what you have.

“We have a few to come down from [owners] Winbak Farms and a few to go back up to them.

“It starts to heat up here shortly, the racing picks up and we have a lot to look forward to with what we have in the stable right now and what we have on the way.

“We have six 2-year-olds in the barn – two of them for Bill Donovan – who we’re pretty high on; a Kadabra filly called Dabra Day that Bill paid $60,000 for in Lexington, then there’s a colt that cost $52,000 by Royalty For Life, he’s now named Flash Point. Bill picked him up at the Winbak sale.

“We also have two 3-year-old trotting fillies for Bill that we’re hoping will be Gold fillies and the way they’re shaping up it looks like they will be.

The Dubliner is also coming off a solid year in the race bike and is looking to keep his foot on the gas in 2021.

“My attitude to driving is the same as the day I arrived in Canada, nothing has changed there,” he said. “I want to stay busy driving and keep driving as much as I can.

“I’m typically not as busy in the winter. Come spring and summer it picks up with Georgian Downs and Grand River getting back with Grassroots racing and that. I then usually hook back up with trainers who haven’t race a lot over winter.

“I always like to stay busy, drive as much as I can drive, wherever the chances come up.”

The bright lights of the Woodbine Entertainment Group (WEG) are always alluring to any driver on the circuit. Haughan and Crone have had their share of success at the big track with relatively limited opportunity.

“The owners we have in our barn, Bill likes to use Louis [Roy] and a couple of other guys. Nifty [Norman], when he sends a horse up, likes to use Trevor [Henry] and Bobby [McClure]. I’ll usually get the drive if those guys pick off, but that’s how it goes, it’s a competitive environment.

“So, no secrets there, you always want more drives and better horses.

“COVID slowed everyone and everything down in 2020 but I still had a decent year in the bike. I don’t worry about an occasional slow week anymore. One bad week doesn’t make a bad year!”

Robert Cleary (38) from West Cork, based in New Jersey.

Looking Stateside, a man who also spent his fair share of time working on the Ontario racing circuit is Robert Cleary.

The West Corkman now runs a stable of 18 in White Birch Farms in New Jersey.

HRU caught up with him earlier this week on route to Yonkers to race stable star Rodeo Rock in the Borgata (formerly Levy) Series. Rodeo Rock, with Tim Tetrick for company, would crack the top three in his first leg, first division outing behind favourites Let It Ride N and This Is The Plan.

“He had some health issues last year,” Cleary said of the Rock N Roll Heaven 8-year-old. “But he’s doing a lot better this year. Rodeo Rock is owned by Royal Wire in Ohio, Don Swick was training for them and he wanted the horse to race during the winter so he sent him up to me.

“COVID was tough, we didn’t race for three months and when we came back we were racing for 20-30 per cent less money.”

There are further links to ‘back home’ in Cleary’s barn in the form of two charges who previously campaigned on the Irish and UK circuits, owned by two long-time horsemen from Ireland.

“I have Gentleman Jim for John Richardson [from Dublin]. He was unlucky when he got here, he was in against some tough horses.

“Blackwell Ruby is owned by [Belfast’s] Gavin Murdock. He’s here since the October before last and won, I think, seven out of nine when he got here, he fit some cheap classes. He’s finding it a bit tougher now but he’s doing good.

“I didn’t think I’d ever get to where I’m at. I’ve got great owners, some big owners, great horses and nothing to complain about.”

Also in New Jersey is the aptly named ‘Irish Joe’ [Ian] Hanney. The driver and assistant trainer with Joe Holloway has been on the shelf since being involved in a nasty accident on Oct. 23 (“the day after my birthday!”) in race six at Freehold.

“I had shoulder surgery on November 20, nearly a month after the accident,” Hanney said. “Next up I’ll be going for knee surgery on April 2nd, so I’m looking at being back in action maybe in August or September.”

Prior to the accident, Hanney had enjoyed a front-row seat for the record-breaking 2-year-old season of Holloway’s Breeders Crown champion pacer Perfect Sting, who went unbeaten in 10 races in his freshman campaign.

“It was great to help break Perfect Sting with Joe, just getting to sit behind horses like that is a pleasure,” the Dubliner said.

“So to not be out there every day on the track is frustrating. Joe is a great trainer, he’s a big name in the sport, a Hall of Famer and he’s excellent at developing younger horses. I’m just looking forward to getting back to work and being able to help win some races again.”