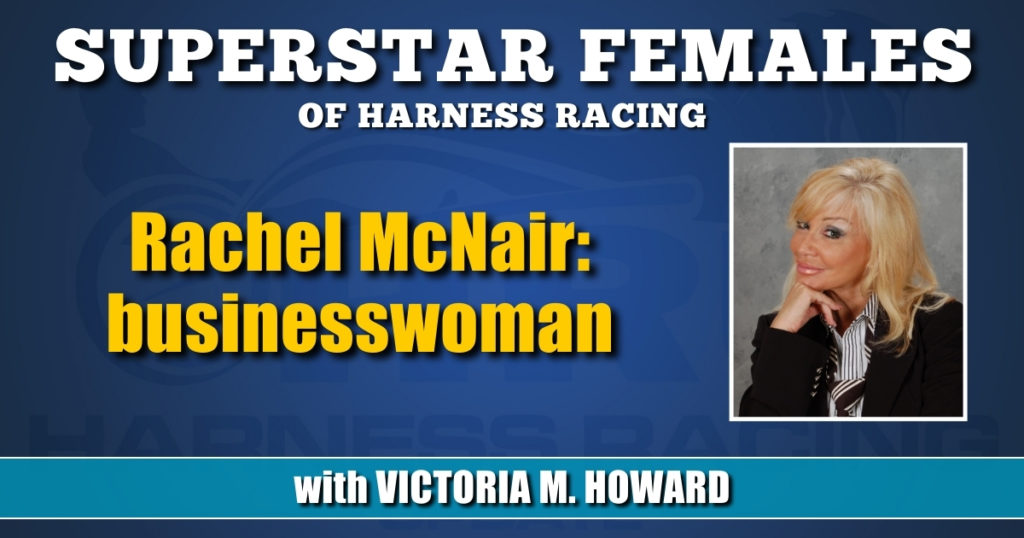 When I started out in the business back in the ‘80s, I always loved the painted jockey statues that sat in front of Bill Haughton and Stanley Dancer Stables.

Today, many stables – large and small — purchase the lawn jockey donned in the stable colors of Crawford Farms, the Burke Stable, Andy and Julie Miller, Rick and Scott Zeron, Trace Tetrick, Matt Kakaley, and many more.This week’s story is on Rachel McNair, the woman who designed the statues for her customers listed above and many others.

Born into harness racing, McNair’s father, Kim Crawford, was a successful driver/trainer who drove mainly at Saratoga Raceway back in the ‘70s, ‘80s, and ‘90s.

“My mother was also very successful in her own right as a caretaker and barn manager of my father’s stable in the ‘80s and ‘90s, while also raising me and my brothers. She, like many women in the industry, was a ‘silent’ hero that took care of everything, making it possible for her husband to pursue his career.

“I was born in Saratoga Springs, New York, and love that city more than any other place on Earth. I have moved away several times but always came back for nowhere else compares to it,” McNair said.

How did you start the jockey statue business?

“I have a business called Saratoga Jockeys where I hand paint custom lawn jockeys. I work with both the standardbred and thoroughbred stables, drivers, small businesses and people that just want one for their front yard.

“I started doing them in 2017 and it was my first experience of dabbling as a small time business owner. Today, I’m the owner of three successful businesses in Saratoga, and I owe the jockey statues to giving me the confidence.

“When I first started selling the jockeys I had zero confidence in pricing. To be honest, I didn’t think they would catch on as well as they had. It was a conversation with Rick Zeron in the paddock at Woodbine one night that changed that for me.

“He asked me how much they were, for he wanted to order one for his stable and I replied, ‘I don’t know. Whatever you think.’ Rick looked at me and said, ‘If you don’t think your work is worth anything, no one else will either. Give me a price.’ I gave him a price and he said, ‘I’ll take two.’

“I have reverted back to that advice for everything I do in business today.”

Today, McNair’s family is still involved in the racing business, although her father, Kim, is retired from driving and training, but freelances as a track supervisor. Her older brother, Brett, and his wife, Michelle, run a stable out of Saratoga Springs, NY.

Rachel currently doesn’t own any horses, but is hoping to soon.

“I think most of my favorite horse stories are from being a little kid growing up in the barn. If you’re one of the lucky ones that get to spend a lot of time in the barn and with horses your childhood is way more fun than other kids.

“When I was around 11 or 12 years old and my father was training for Bob Rosenheim, I would sleep in the broodmare barn at night when the mares were ready to foal. I took care of two broodmares back then named Arenal and Armbro Prowess. They were my pride and joy.

“I have worked in a lot of areas in the business. I helped my family with their stable and during high school and college I worked in the press box and race office at Saratoga.

“After college, I became a full-time groom working at several stables in New York, New Jersey, and Canada. I was lucky enough to care for the horse Magnum J the year he was in the North America Cup, which was a great experience. But, my favorite horses I cared for were usually not superstars for I was always drawn to the fixer uppers.”

Rachel has two other businesses besides the lawn jockeys. She is the owner of a boutique called The Bohemian & Co which is an online boutique featuring handmade designs for home décor and apparel.

“Our mugs have developed a bit of a cult following — for lack of a better phrase — which is awesome. We are currently reworking the shop to include other artist homemade work, since I’m having a hard time keeping up with demand these days.

“And my third business — my pride and joy — is my social media agency called The Content Saratoga where I do social media management, content creation and web design for small business and blogger/influencers.

“I now have the agency headquarters on Broadway in Saratoga Springs.To be on Broadway is a big deal in this town and I feel so blessed to have gotten to this point in only a year and a half,” McNair said.

Although McNair has certainly come a long way in such a short time, she didn’t forget her roots.

“I definitely contribute my success as a business owner to growing up in the harness racing industry. I never attended business school, but was born, raised, and worked in one of the toughest businesses you can find. I get my work ethic from working long, hard hours in the barn as a groom.

“I’d love to start mixing harness racing into my social media and content marketing world. I believe there is still a huge potential for breeding farms and stables to utilize social media to grow their business and gain exposure. I think it would be awesome to mix my knowledge of harness racing with my skill set foe social media.”

What has been your harness racing highlight?

“It was definitely working with my family – especially with my brother Brett. My best memories were when Brett and I went to the fairs when he was starting out. He is definitely one of the best horsemen I’ve ever seen. A lot of people can learn to train horses, but having horse sense is something you’re born with, and Brett is one of the few who was born with it.

“As far as women in the business – I think they have come a long way in a sport that has always been male dominated and I’m happy to see that they are finally being recognized.”