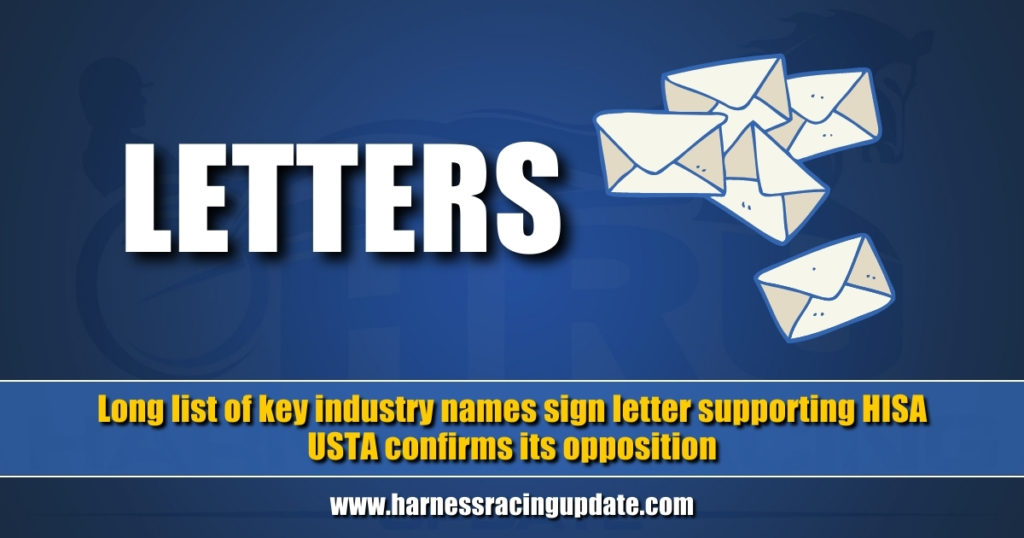 written by Steve Stewart and Linda Toscano
The undersigned are encouraging the standardbred industry to negotiate with the thoroughbred industry about how to best structure the Horseracing Integrity and Safety Act to be inclusive of harness racing’s unique needs.

We (the undersigned) support the Horseracing Integrity and Safety Act (HISA) recently passed by Congress and signed into law by President Trump.

We know that there are details about funding and other matters that will have to be worked out in good faith between regulators and members of the horse racing community. And we know that the new law is not perfect. But we believe that the new law is a legitimate and important step in the right direction toward universal medication rules for our sport, increased enforcement of drug rules to make the sport more honest and a greater public acceptance of horse racing as a safe, humane sport.

We need all of these things to protect our sport’s future. And we need to work within the broader racing community to make the law work for us, especially since it requires regulators to consider the “unique characteristics” of each breed. We believe that representatives of the standardbred industry should work with those who support the new law, and who will be enforcing it, to help establish the rules and policies that will likely govern our sport for years to come.

USTA confirms its opposition to HISA

We (the United States Trotting Association) oppose the Horseracing Integrity and Safety Act (HISA) of 2020 (HISA), which Senator Mitch McConnell (R-KY) acting on behalf of the topmost sliver of the thoroughbred elite inserted into the middle of the 5,500-page, last-minute omnibus funding measure that passed at the end of the last Congress and was signed into law on December 27, 2020. In doing this, McConnell broke his own promise, given to Senator Toomey and others, to allow a roll call vote on the measure. This was a fixed race, hardly an auspicious start for an “Integrity” Act.

HISA is unconstitutional. This is what happens when a special interest succeeds in ramming through a bill surreptitiously, with no debate or amendment process. However, HISA also promises severe economic damage to our entire industry, so when Jeff Gural proposed a round table to study possible amendments to HISA and to define its funding, the USTA put constitutional concerns to one side and joined in, hoping to find out whether harness racing could be adequately protected. As Gural wrote, “the federal legislation needs to be modified for it to work for standardbreds.”

The USTA did not come to the round table empty-handed. We have the draft, ready to introduce in Congress, of a federal statute that would not be unconstitutional. It is founded on veterinary science, provides for scientifically correct use of therapeutic medication in standardbreds, and ensures fair representation of the standardbred breed. Importantly, the USTA bill would cost racing participants many millions of dollars per year less to operate, because it uses existing state regulatory resources instead of reinventing the wheel at the federal level. The USTA’s bill is presently under consideration by the round table.

Vague HISA language about the “unique characteristics” of each breed is just as much a requirement for regulators as “thou shalt not steal” is a requirement for bank robbers. What would actually work is requiring a separate set of medication regulations for each breed, which the USTA draft includes and HISA does not. Instead, HISA bans Lasix then spells out an obstacle course for the use of Lasix that cannot possibly be navigated. Any suggested change to the standardbred medication rules under HISA would continue to be attacked by the Racing Medication and Testing Consortium (RMTC), a thoroughbred organization of which John Campbell is a director. For years, RMTC has stridently and unfailingly opposed every one of the USTA’s science-based medication recommendations to the state commissions, even when RMTC lacked any scientific basis for doing so.

The USTA differs from every other round table member in that we represent the interest of all participants in harness racing. The HISA proponents at the round table represent themselves individually. Even the Hambletonian Society is merely a record-keeping organization whose pronouncements only represent the personal views of its 17 individual directors, two of whom are major thoroughbred owners and officials. The USTA is therefore duty bound to fight to protect our sport from crippling expenses and regulations, and if the round table proves to be nothing more than another invitation to surrender, we shall continue the fight.

HISA’s supporters should work with the USTA to establish rules and policies that will protect and nurture the harness racing sport for years to come.