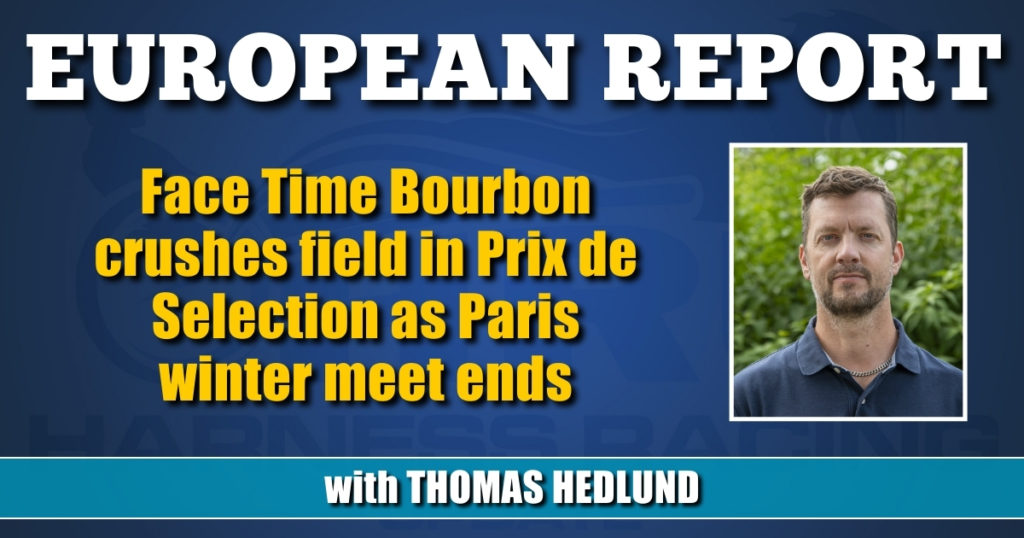 Face Time Bourbon (Ready Cash) played with his competitors in the $241,000 Prix de Selection at Vincennes on Saturday afternoon (March 6).

Saturday was the last day of the long winter meeting in Paris and driver Eric Raffin made his acquaintance with Face Time Bourbon again after two years pause between them. Raffin solved the task without problems and he let Face Time Bourbon start far outside on the broad Vincennes track to then advance to the lead 500 meters into the 1.3-mile race.

The pace was quite high throughout the race and Face Time Bourbon, trained by Sébastien Guarato, reached the mile at 1:54.1. With 600 meters to go, everything seemed to be an easy path to victory for the outstanding trotter in front. Face Time Bourbon left his opponents far behind, finishing with a mile rate of 1:53.1 that was a stakes record.

Meanwhile, Raffin established his own position in Paris this winter. He had a tremendous meet and to close the program with a victory behind one of the best trotters in the world must have felt especially.

For Face Time Bourbon, this victory meant that he has claimed the trophy in this particular event three years in a row, an achievement previously only accomplished by Jamin in 1957-1959, which www.sulkysport.se reported ahead of Saturday’s race.

Earlier on the race card, Raffin sat on 4-year-old Hallix (Roc Meslois) in the $121,000 Prix Louis le Bourg monté race and the horse claimed her sixth consecutive win at Vincennes.