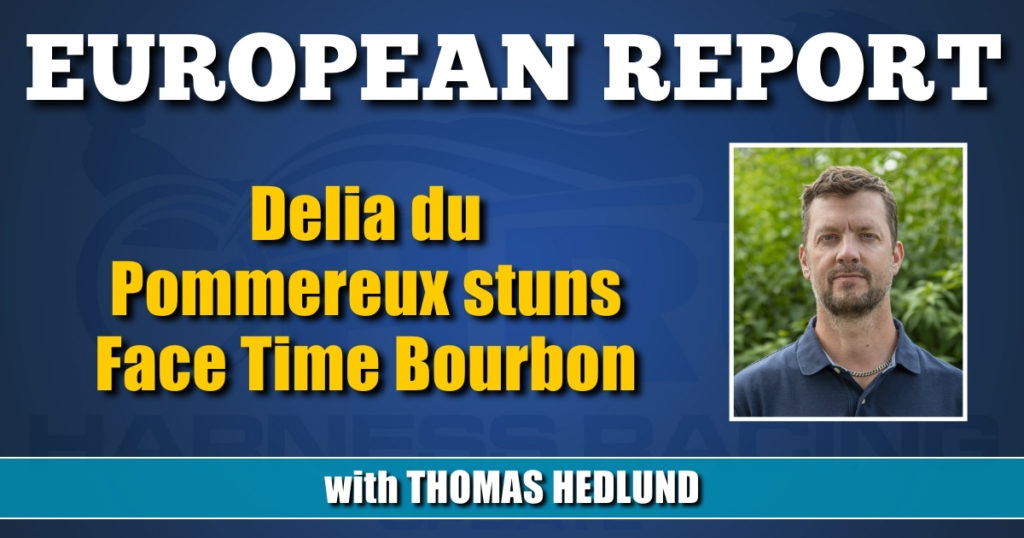 Not long after Prix d’Amérique champion Face Time Bourbon finished second in the Prix de France, his driver Björn Goop was dropped by the horse’s owner.

Face Time Bourbon (Ready Cash) seemed poised to cruise to an outstanding victory when the $485,000 Prix de France over 1.3 miles was held at Vincennes racetrack in Paris on Sunday afternoon (Feb. 14).

Björn Goop sent Sébastien Guarato’s champion trotter to the lead 600 meters into the race and Face Time Bourbon was really on fire in front. The pace was set high and the followers had problems connecting with the leader in the last turn. So Goop did what he could to get Face Time Bourbon cruising away from the opponents. In mid-stretch, the victory seemed very close with Face Time Bourbon still in a several lengths lead at that point.

But Face Time Bourbon ran out of gas shortly ahead of the wire while Delia du Pommereux (Niky) delivered an incredible finish for Eric Raffin.

The win for Delia du Pommerux in a mile rate of 1:52.2 was well deserved. Sylvain Roger’s mare has belonged in the top in France during the last few seasons and the entourage around the horse have most certainly longed for a triumph in one of the biggest races in France.

Face Time Bourbon finished second and 5-year-old Aetos Kronos, trained by Jerry Riordan, claimed the bronze medal.
Raffin had a tremendously strong meeting in Paris 2020-2021 and he was full of joy after the big win at Vincennes.

”Honestly, I didn’t quite believe that we could beat Face Time Bourbon. My hopes were that we could end up as second or third in the race, but this mare is an exceptional horse and a really strong finisher. This is a dream come true for me and it’s my biggest win in the sulky”, Raffin said after the victory.

For Goop, the runner up performance with Face Time Bourbon seems to be his last dance with the Sébastien Guarato trained trotter. The horse’s owner, Antonio Somma, declared in French media on Thursday afternoon (Feb. 18) that Goop will no longer be the driver of Face Time Bourbon.

“Björn Goop will no longer drive Face Time Bourbon. Björn was a really good driver for 17 months, but now the adventure is over for his part,” said Somma.

The owner then gave trainer Sébastien Guarato five names of drivers that will replace Goop behind the horse. Eric Raffin, Gabriele Gelormini, Yoann Lebourgeois, Matthieu Abrivard and Fanck Nivard were named and the trainer has decided Raffin will take over the reins behind Face Time Bourbon in the future.

“The choice is Eric Raffin and he has already accepted,” said Guarato to French TV-channel Equidia.

Goop commented on the news via Twitter on Thursday afternoon.

“That a horse gets a new driver is part of the rules of the game. I’m grateful that I’ve been given the opportunity to drive Face Time Bourbon. I wish all the best to the horse and to the entourage around him in the future,” Goop wrote.

Goop, who won Prix d’Amérique with Face Time Bourbon three weeks ago, can look back at a pretty successful collaboration with one of the world’s best trotters at this moment. Twenty-nine starts have resulted in 24 wins and earnings of $3,247,988.