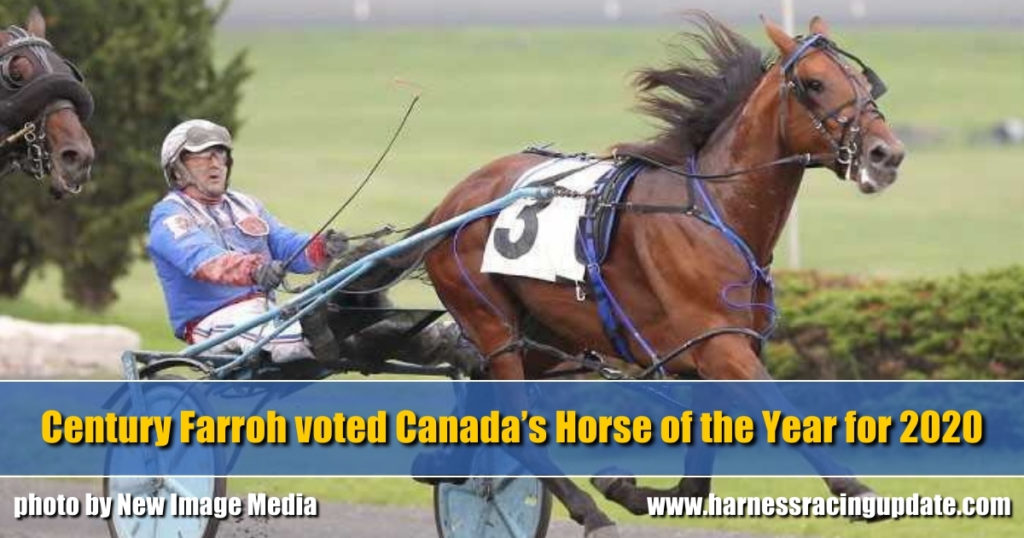 Century Farroh voted Canada’s Horse of the Year for 2020

by Dave Briggs with files from Standardbred Canada

Century Farroh was announced as the winner of Canada’s 2020 Somebeachsomewhere Horse of the Year on Sunday (Jan. 31) during a virtual edition of the O’Brien Awards honoring the best in Canadian harness racing produced and broadcast by Standardbred Canada.

It was the fourth O’Brien Award of the night for trainer Dr. Ian Moore. Century Farroh, the 2020 Breeders Crown and Dan Patch winner, both at Harrah’s Hoosier Park, also took home the honors as the country’s Older Pacing Horse after scoring 12 top-three finishes in 16 starts and compiling earnings of $637,000. Moore trainees Lawless Shadow (Two-Year-Old Pacing Colt of the Year) and Tattoo Artist (Three-Year-Old Pacing Colt of the Year) were also winners.

“It’s just nice to see the horses get recognized. Good help and good horses… and some good management, maybe, makes for a good combination, so it’s nice to see,” Moore said when reached Sunday night in Florida where he is training 20 horses, 14 of them 2-year-olds, along with four 3-year-olds — including Lawless Shadow, Alumni Seelster and Lady Arthur — as well as older horses Century Farroh and Tattoo Artist. “The only reason I’ve gotten some of those horses have been long-time participants in the industry… Dave Ratchford, Ron and Gail McLellan, Serge Savard, Frank Cannon and Eric Cherry’s Let It Ride Stable.

Lawless Shadow had an ultra-consistent season that saw him hit the board in eight of nine races, including four victories, while earning more than $307,000. He scored two wins in Ontario Sires Stakes (OSS) events, a win in the Nassagaweya, runner-up finishes in his Metro elimination and OSS Super Final and a third-place finish in the Metro Final.

Tattoo Artist was a winner of eight of 17 starts and more than $666,000 last season with victories in five OSS events and a division of the Simcoe Stakes. One of his biggest efforts was a runner-up finish in the $1 million Pepsi North America Cup.

“I think with babies, especially in today’s style of racing and driving, it’s important (to start slowly)… They are all so well-bred and good and they want to do it for you, that no matter how fast you train or qualify them they are going to go out and race their guts out, five or six seconds better than they’ve ever been in their life and that might be a detriment to a lot of 2-year-olds so I think it’s good to start them in a place where you can finish the race hanging onto them and knowing that there’s a lot more for next week.

“I take pride in all of our horses, whether they win a Sires Stakes series or Gold or whatever. Practically every horse in our stable has been yearlings that we have developed and made into racehorses, so that makes it even more satisfying and gratifying when they go out and win their first race.

It was the second Horse of the Year title for a Moore trainee in the last six years. His pupil State Treasurer won the 2015 Horse of the Year award the same year Moore was named the O’Brien Award winner for Horsemanship.

“The pressure will be on this year, won’t it?”

Meanwhile, Richard Moreau added a record eighth O’Brien trophy to his mantle in the Trainer of the Year category after a season which saw him top the earnings and win charts for Canadian trainers. Based in Puslinch, ON, Moreau is one of the country’s busiest trainers sending postward 1,604 starters that made 237 trips to the winner’s circle and earned more than $3.6 million in purses.

Bob McClure of Rockwood, ON, won his first O’Brien trophy as Canada’s Driver of the Year following a career-best season for earnings. McClure was the country’s leading money winning driver and he also reached several major milestones last year — eclipsing the $7 million mark in earnings, winning his first Breeders Crown Championship and capturing the Lampman Cup as the Ontario Sires Stakes’ leading driver. Some of the horses he regularly drove who contributed to his earnings milestone and 233 trips to the winner’s circle included divisional champions Donna Soprano, Lauras Love, Lawless Shadow and Tattoo Artist, while sharing the driving duties aboard On A Streak.
“It’s a nice accomplishment,” McClure said. “It says a lot for the great stables I was lucky enough to drive for.”

Scarlett Hanover was crowned champion in the Two-Year-Old Pacing Filly division following a stellar season which saw her post 11 top-three finishes from 14 starts and bank more than $449,000 in earnings. She won two OSS events including the OSS Super Final and also competed against Grand Circuit company, scoring a season’s best 1:51.3 victory in the Champlain Stakes while also winning an elimination of the Shes A Great Lady.

In the Three-Year-Old Pacing Filly division, Lauras Love took O’Brien honors. The Betterthancheddar filly was a model of consistency in 2020, scoring 16 top-three finishes, including eight victories from 20 races, and earning $331,000 for her connections. In addition to a victory in an OSS event, she scored multiple victories in overnight competition and also won a division of the Simcoe Stakes against Grand Circuit company.

Trainer Luc Blais had two O’Brien Award winners – Donna Soprano and On A Streak. Donna Soprano was voted Two-Year-Old Trotting Filly of the year. The Donato Hanover filly won five of seven races and more than $575,000 for her connections in a season that included sweeps of the Pure Ivory and Peaceful Way Stakes, a win in a Champlain division and an impressive runner-up finish in the inaugural edition of the Mohawk Million.

In the Two-Year-Old Trotting Colt division, On A Streak beat out stablemate Macho Martini. On A Streak had only two wins in 10 starts, but they were both very lucrative ones. His maiden-breaking effort came in the $525,000 William Wellwood Stakes, which was worth $267,500 and a coveted spot in the inaugural Mohawk Million where he finished a solid third. His second victory came in the Breeders Crown, and was worth $300,000. In total the Cantab Hall colt earned in excess of $850,000 for his season which also included a runner-up finish in the Valley Victory.

Sorella took divisional honors as Canada’s Three-Year-Old Trotting Filly of the Year for a season which saw her win eight of 15 races and $737,000. The Muscle Hill filly posted victories in multiple stakes events including the Hambletonian Oaks, the Reynolds, the Casual Breeze, the Bluegrass and the Matron.

Pemberton, a son of Wheeling N Dealin, was voted Canada’s Three-Year-Old Trotting Colt of the Year. A winner of eight of 10 races, he earned more than $363,000 during his sophomore season. Four of his victories came in Ontario Sires Stakes events including the season-ending Super Final.

In the Older Trotting Mare category, Hey Livvy won O’Brien honors for her season which included nine wins and more than $283,000 in 23 trips postward, highlighted by her richest payday, an impressive victory in the Armbro Flight Stakes.

Perfetto was voted Older Trotting Horse of the Year after winning seven of 25 races and more than $151,000 while making all but one start at Woodbine Mohawk Park. The son of Majestic Son posted a career best effort of 1:52.3 on December 14.

Austin Sorrie, of Freelton, ON, was recognized with the Future Star Award.The Prince Edward Island native was in demand on the Ontario B Track circuit in 2020, driving in more than 1,200 races, scoring 151 wins and driving horses to more than $923,000 in purse earnings.

In the Armstrong Breeder of the Year category, Seelster Farms in Lucan, ON, added a fourth O’Brien bronze to their trophy case. In 2020, horses bred by Seelster won 260 races and earned more than $3.5 million. Top performers included O’Brien divisional winner Lawless Shadow, O’Brien finalist Karma Seelster along with Tokyo Seelster.

Brady Jackson of Sunderland, ON was voted the Outstanding Groom of 2020.

Here is the complete list of 2020 O’BRIEN AWARD WINNERS

SOMEBEACHSOMEWHERE HORSE OF THE YEAR

ARMSTRONG BREEDER OF THE YEAR

DRIVER OF THE YEAR

TRAINER OF THE YEAR