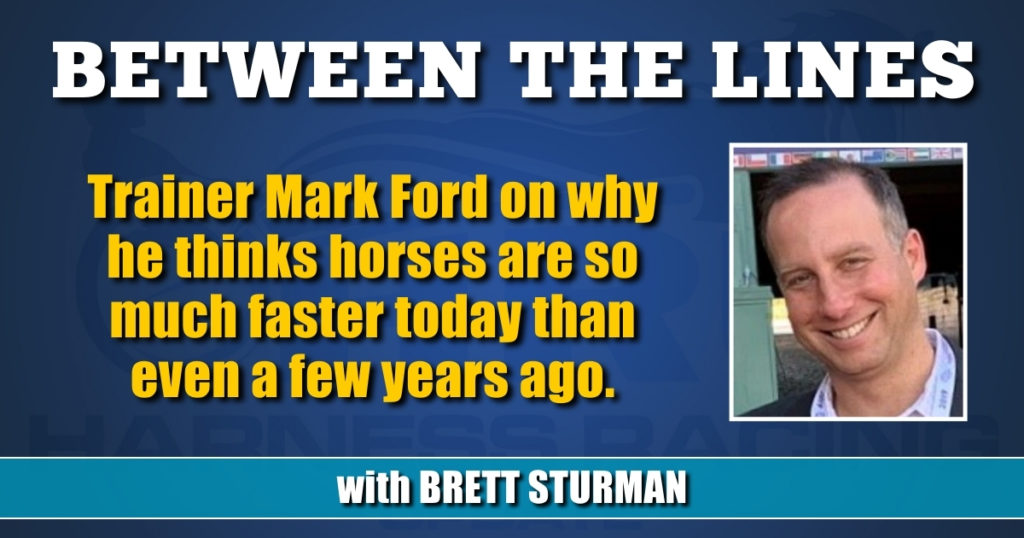 What is driving new speed records?

Trainer Mark Ford on why he thinks horses are so much faster today than even a few years ago.

Almost exactly four years ago, I wrote how recently attained speed records at that time by Always B Miki and Sebastian K were so fast that they might never be matched (full story here). While I was wrong on that front, that column did conclude that there would be an acceleration of fast miles that only a select group of horses had achieved prior.

Pacers tell a similar story. Two years ago, the modestly-bred Lather Up equaled Always B Miki’s 1:46 mark on the pace, and other horses to go in 1:46 and change just recently includes McWicked, Dr J Hanover, Cattlewash and the fastest pacing mare ever, Shartin N.

Where the speed improvements are even more profound is when looking at 2-year-olds. Of the 29 fastest 2-year-old trotters in history, 19 of those have come just since 2018. From this list, all top records were taken from 2013 onward. For 2-year-old pacers, 14 of the best 27 freshman pacing miles ever have come since 2018. Only three 2-year-old’s have ever paced sub 1:50, and those three also all occurred since 2018. And two of those three were fillies.

Through his training career of nearly 4,000 wins and over $65 million in purses earned, Mark Ford has seen dramatic shifts on different fronts which he attributes to the increased speed marks.

“It’s a three-pronged approach,” Ford said, and it begins with the breeding. “The horses are so much better now than they were. It’s a more refined breed and horses are just better. It used to be where they were a slower breed, there were a lot more bloodlines and different sires. But now over the years it’s become more refined. The horses now are much better gaited, better looking and they go faster.”

On top of that, Ford explained, is the evolution of equipment and the modern catch driver. “We used to have old wooden Jerald bikes that were sturdy, but these new metal bikes are far more dynamic. There’s a better brand of equipment, better harnesses, and the equipment is much different than it used to be.

“And then there’s the catch driver today. Even since I started, there are now 10 drivers at every track that are young, athletic, competitive and they don’t hold back. Quarters in :26 are very regular where 20 years ago it would have been eye-popping. With the horses being better gaited and more athletic, they can pace fast but they can also carry their speed so much further. You put those two together and you get much faster times.”

In a way, Ford’s Hall of Fame trainee Gallo Blue Chip was the last from a prior generation of speed. When Gallo Blue Chip won the Meadowlands Pace as a 3-year-old in 2000, he did so in a time of 1:50.4. Since then, no Meadowlands Pace ever went above 1:49.4 and likely will never do so again. By today’s standards, 1:50.4 may not even get too far in a top race for 2-year-olds.

“Blue Chip was a generation ahead of himself,” said Ford. “I think he could carry his speed a long, long way and he was just a man amongst boys. He was a mature 2-year-old and even more as a 3-year-old. He was just so much better than them. Time is so irrelevant now that it’s hard to compare a horse from 20 years ago to a horse from today. But I know for sure that in 2000 he was the best 3-year-old and in 2001 he was the best 4-year-old. Maybe today he would have paced in 1:47.2 or so because that’s now the norm, but it wasn’t back then when they only had to go as much as they had to.”

When asked what he felt that advances in nutrition and medication had on the advancement of speed, Ford felt that impact was negligible. “A good horse is a good horse. You might see some horses go a freakish mile, but I think medication has less to do with than anything else.

“Years ago – and not even that many years ago – you’d take a (yearling) colt and be line-driving them for a week before you could even hook him. And then it’d be another 2 weeks before you’d get the hobbles on and you’d train and train to hopefully have them him in 3:00. Today, I just watched a pair of colts train in 2:15 before Thanksgiving at Goshen. It’s unbelievable how fast they come to their speed. Now it’s common for 2-year-old trotters to win their first or second qualifiers in 1:55, where 20 years ago that would have been a world record in the fall. They come to their speed a lot quicker now, and people aren’t worried about what we were all taught about not racing horses too much as a 2-year-old; that’s out the door.

“You take the entire perfect storm and you have trainers that train for more speed, and I’m convinced that it’s just a faster, better product, a better racehorse.”

It’s hard to know where the bottom is with respect to how much faster harness horses can physically go. What once seemed impossible not too long ago is now routine. By recent trends, the new standards of speed will continue to be pushed even more in seasons to come.