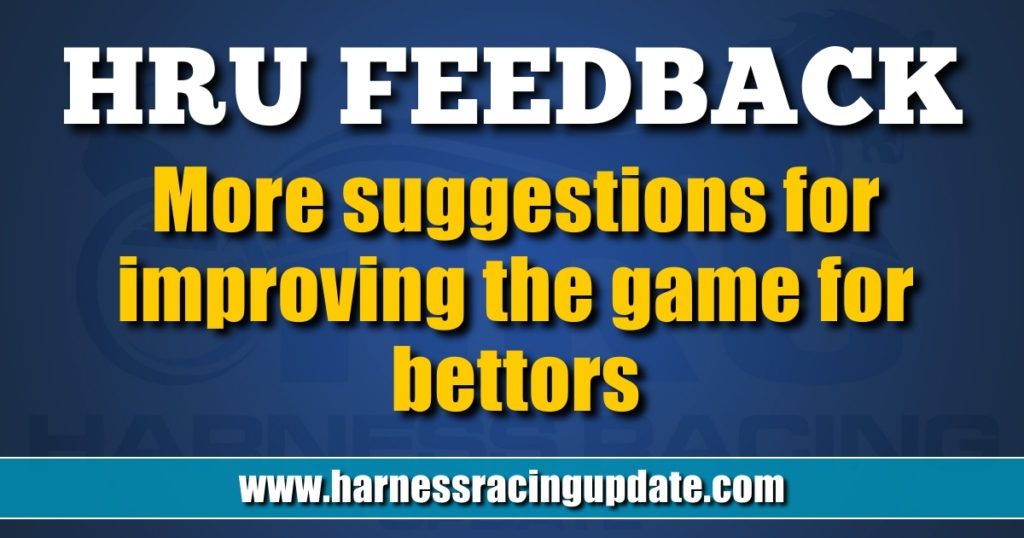 More suggestions for improving the game for bettors

First of all, I would like to commend Harness Racing Update and Hollywood Heyden for his thought provoking suggestions for improving the sport that so many of us love (full story here).

I confess I fall into the over 65 category and while I have owned nine standardbreds in the past, I currently own none. I do watch races on RTN virtually every day, but am discouraged/annoyed that by living in Maine we cannot wager on The Meadowlands. Hopefully that can be worked out soon.

In addition to his suggestions I would like to offer the following:

• Providing access to free programs. Even when I don’t wager on a particular day I want to follow horses so that I can bet him “the next time out.” The Meadowlands has begun this and are to be applauded.

• An ability to follow a horse without subscribing to Pathway. If I watch a race and see a horse that I want to bet his next start I should be able to type in his name and see where/when he is next entered.

• As has been said by many, eliminate the drag time. I switch channels when 0 minutes to post is really 5-10. It has become ludicrous in many instances.

• Interviews with drivers other than the winner. I don’t need to hear about how wonderful the winner was, I just saw that. I want to hear from the 1-5 favorite’s driver who finished 6th. This is not meant to embarrass anyone, but can assuage the public’s perception that he wasn’t really trying to win. We’ve all see bridge jumpers wager thousands to show and have the horse finish out of the money and thus light up the tote board. Let the driver explain why.

• More information on claims. Who got it is fine, but how many claims were entered, how many times has he been claimed and why? Again, interviewing a trainer who enters a horse knowing he will lose that horse could be informative to the public. The more information given, the better.

• Driver odds. Post position percentages are offered at many tracks but what about drivers? If Driver A’s average win price is $32 it tells the bettor something. If Driver B ‘s average win price is $3.20 it says something else. How about times driving a beaten favorite? The Who’s Hot and Who’s Not columns are fine but often the same driver is in both columns at the same time. Also, they could be meaningless. Jason Bartlett has low numbers at The Meadowlands. It’s not because he’s forgotten how to drive or can’t drive the mile track, it’s because he’s driving weak stock.

• If a track is going to list morning lines then take some pride in trying to be accurate. Many are done with no attempt to be accurate. If they know Tall Dark Stranger is going to be 1-9 don’t list him at 2-1. Why have Gluefoot at 20-1 when everyone knows he’ll be at least 50-1.

• Listing driver choices is a good addition but ask drivers “Why?” Was it because of an allegiance to a trainer or was it because he feels the 7 is much better than the 4? Or was it based on post position or because one horse leaves better and he intends to be on the front end. Inquiring minds want to know!

Bettors realize that tracks have biases on different nights. Post those for every card. We have post position stats but is it not more valuable to know where the winners sat in the race rather than the post he left from? This should be done during the racing card also so when betting a later race you know whether front end speed has held up etc.

Update driver/trainer lifetime totals. I know how many wins Bill Belichick has and how many home runs Hank Aaron hit, what about wins for Tim Tetrick? If I know a driver has 4,999 I should know it. I might be more inclined to bet him.