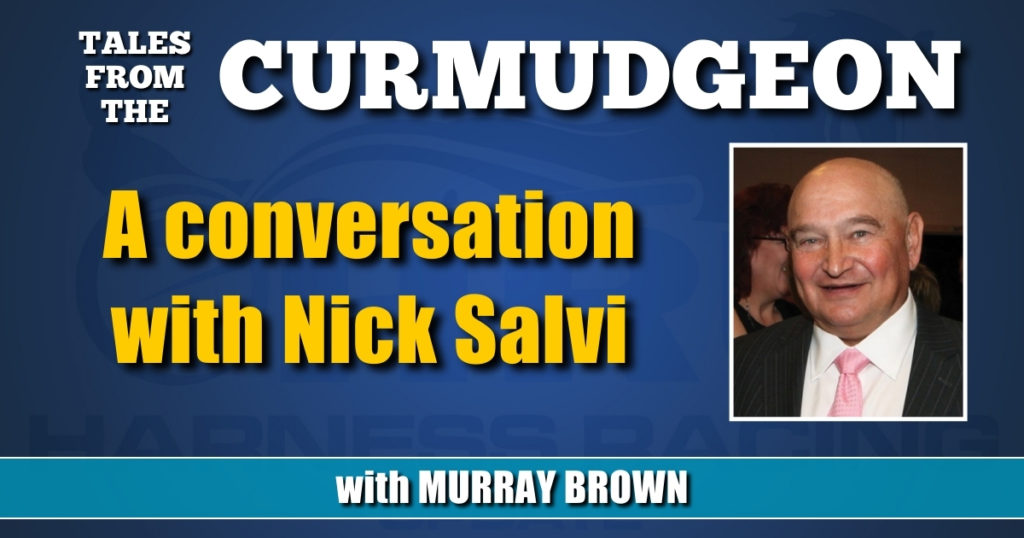 A conversation with Nick Salvi

Salvi has likely held more positions in harness racing than anyone else in the history of the sport.

One of my favorite poems is called *”No Enemies” by Charles MacKay. The basis of the poem is that if you’ve made no enemies, then chances are that you haven’t accomplished much in this life of ours. The subject of this week’s article is the antithesis of what the poem suggests.

Nick Salvi has likely held more positions in harness racing than anyone else in the history of the sport. Furthermore, he has never been fired from any of them. If anybody has done the firing it was him. If Salvi has made any enemies, I’ve never met any of them. I doubt that anybody else has either.

Salvi grew up on The Meadows’ backstretch from age 12 working with his father, John, who himself was somewhat of a neophyte in the sport. John wisely enlisted a talented old horseman by the name of Carl Sifert to help with those early lessons, ultimately both learned the art of horsemanship at a very high level from Carl.

When Nick got his pari-mutuel license to drive at age 18, John put him up on all of the horses in his fairly large and successful stable. While it likely cost a few wins along the way, it gave Nick a big chance and ultimately resulted in a leading driver title at The Meadows in 1977. In 1978, Nick received the Peter Haughton Award given annually to a promising young horseman.

The next stop was Pompano Park where family stable star The Consigliori finished fourth to the great Niatross in that one’s career final in 1980. Pompano is where you can still find Nick each winter to this day.

In his early 20s, Nick went out on his own, becoming a contract trainer driver for local owner DeLallo Farms that came with a chance to try his hand at the yearling/stakes game. Top trotting prospects Speedy Anthony D and Giorgio D, two sons of Speedy Somolli Nick selected and purchased as yearlings, competed, albeit unsuccessfully, in the 1983 and 1984 Hambletonians.

The most accomplished product of that endeavor was the pacer Ravenova. Purchased off the fair tracks of Indiana as a 2-year-old in1981, Ravenova went on to finish second in the $300,000 1982 Spring Championship final at Los Alamitos (defeating the great Cam Fella when that rival was taken out by a breaker) and later set the world record for 3-year-old pacing geldings with a 1:55 effort at Pompano Park.

Some years after the DeLallo job, Nick privately trained a stable for a man named Harold Berzon of Pompano Beach, FL. While the motivation while working for DeLallo was to develop young horses into stakes performers, the Berzon philosophy was almost the direct opposite. Harold was into racehorses and the pair assembled a quality stable of overnight types that campaigned at Freestate and The Meadowlands in the late ‘80s.

Best among those was a highly touted Down Under star named Swapzee Bromac, purchased from New Zealand by Lou Guida for a very large sum of money and brought to the Jerry Silverman stable in the U.S. In the Silverman barn, Swapzee underachieved to the point where Nick took him from a $75,000 claimer at The Meadowlands for Berzon’s account. For the balance of the season, Swapzee Bromac reverted to the highly touted horse he was expected to be winning a number of top class races culminating with a fifth in the 1987 Breeders Crown Open Pace and a Pompano Park track record.

However, his all-time favorite horse was the excellent open trotter Elan Spur. Nick thinks so much of him that his email address is a tribute to the trotter.

In 1999, at the age of 40, Nick found himself somewhat lost. He had grown weary of racing horses. Today we would call it burnt out, although with Nick it was at a relatively young age. What was he to do? He didn’t know much except horses he had grown weary of the grind of being a horse trainer.

He called his friend Roger Huston looking for a job. Roger’s response was, “When can you get here?”

To quote Nick, “He saved my ass.” There was no equivocation.

Nick went to work with Huston on his popular show from The Meadows for a year and a half. It was Huston who recommended Nick to Paul Spears to be the executive director of the Classic Series where he had a good run for a couple of years. That job opened doors to other opportunities, including a position at the Red Mile in Lexington when the current ownership group took over in 2001.

Nick has, at one time or another, done just about everything a person in this sport could possibly do. Aside from his early life training and driving, Nick has been a racetrack executive, a director of racing and a racing secretary, a steward, a USTA director, a host on several harness racing shows, driven starting gates and run the teletimer/photo finish when in a pinch and even worked as an assistant for Hall of Fame trainer Ronnie Gurfein.

He still rides occasionally as a dollar a year man for several stables in South Florida.

Nick, People have sometimes asked me what is it that you do. I’m sure that you’ve been asked that a lot. What do you do?

“I’ve been with Jeff Gural tracks about 15 years, it’s officially a career now. I do what needs done and having been on ‘both sides of the fence’ gives great perspective. I’m pleased to be included in the group that discusses our policies and practices along with new thoughts and ideas to improve the product. I do the stakes scheduling for The Meadowlands, Vernon and Tioga. I’ve been involved in the creation and establishment of new stakes at the Gural tracks such as the Kindergarten, Graduate and TVG Series, working out the details of what, how and when. I do all of the racing related advertising and all of our live date and stakes calendars and write many of the racing related press releases. Occasionally, I am called upon to take an active race office role as was the case last year at Tioga Downs.

“We are really excited looking forward to our involvement in the prep work for and execution of the Breeders Crown coming back to The Meadowlands this year for the first time since 2016.

“In Lexington I help Cindy Solverson in working with the stakes sponsorships along with the planning of events and scripting of the simulcast broadcast each live racing day. We do what needs done, a labor of love.

Tell us about your relationship with Jeff Gural.

“I like it. I’ve come to be very fond of the Gurals and I’m quite happy to be in their employ. From an employee perspective, Jeff is very fair and unfailingly loyal. He’s the most unique and sometimes misunderstood person of all my years in the sport. He genuinely loves the racing and the horses. I shudder to think where we would be without him. Jeff says exactly what he thinks at any given time and makes no apology, which can occasionally result in a certain level of discomfort. From 15 years of experience I can tell you that far more often than not, he is right. I’ve sometimes wondered why he puts up with the aggravation. He certainly doesn’t need it.”

“Jason is the most tenacious and positive person I know. We have become close friends and I treasure that. Jason has remarkable people skills, is a terrific boss and manager and he executes Jeff’s vision to the best of his ability, which is what he is paid to do.”

Last year your schedule was somewhat different than it normally is. You normally spend the winter in Florida, then come up for the spring and summer at The Meadowlands. After the Hambletonian is over, you are off to Lexington.

“Yes, last year was certainly different. We thought we had a racing secretary at Tioga, but at the last moment, because of the pandemic, he decided to stay in New Jersey so I went up to get it open and wound up staying all summer. I can’t say I was thrilled with the prospect because the area around there is somewhat of a cultural vacuum. However, because of that same COVID being there was likely better than being in the NY/NJ Metro area.

“Jeff and Paula Gural offered me their house on their Pennsylvania farm only 10 minutes or so from the racetrack and that made it far more comfortable. It is a grand house with a great kitchen and I love to cook. I’d wake up each morning to horses everywhere — mares, yearlings, sucklings, what a wonderful way to start a day.

Speaking of COVID, how has it affected you?

“For the most part, not very much at all, I traveled and went about my life as I normally would. Of course, I try to do what I’m supposed to do with regard to wearing a mask and social distancing out of respect for others.”

At The Red Mile you work for George Segal and Frank Antonacci. Tell us about them.

“George is one of the sweetest, most caring persons I’ve known, a pleasure to work with. He manages to apportion responsibilities and then let those he chooses do their job. Whether its Art Zubrod, Myron Bell, his various yearling ‘lookers’ and trainers or Cindy Solverson at The Red Mile, they do a great job for him.

“Frankie, as is George, is a brilliant businessman. The empire that their father Sonny began and which Frankie and his brother Gerry have advanced is remarkable. Frankie is a true entrepreneur, diversifying from the core business into many successful ventures and that’s not to mention their incredible accomplishments in harness racing and now taking on the thoroughbreds.”

Can you envision yourself training horses again or ever?

“In a word, no. I have complete confidence that I’d fail. Harness racing has changed so dramatically just in my lifetime that it is barely recognizable. Like many, I love the horses, dislike the business.”

Your love for Lexington is often expressed both verbally and in your writings.

“It is clearly the finest experience our business has to offer. A social event like no other, enhanced by the evening horse sales. The Red Mile is unique in many ways, led by the track itself along with the tradition and history that comes with a Grand Circuit win there. The beauty of a sunny afternoon of racing there is unmatched.

“So, far as the town, I smile the whole time I’m there. It’s a very live place, collegiate life brings culture and things to do. There is ample nightlife including my favorite restaurant, Le Deauville. I like to call it Lex Vegas.”

You love eating and good food. What would be your ideal meal?

Now, if my editor will indulge me, I’ll post the poem which began this story.

YOU have no enemies you say?
Alas! my friend, the boast is poor;
He, who has mingled in the fray
Of duty, that the brave endure,
Must have made foes! If you have none
Small is the work that you have done.
You’ve hit no traitor on the hip,
You’ve dashed no cup from perjured lip,
You’ve never turned the wrong to right,
You’ve been a coward in the fight.