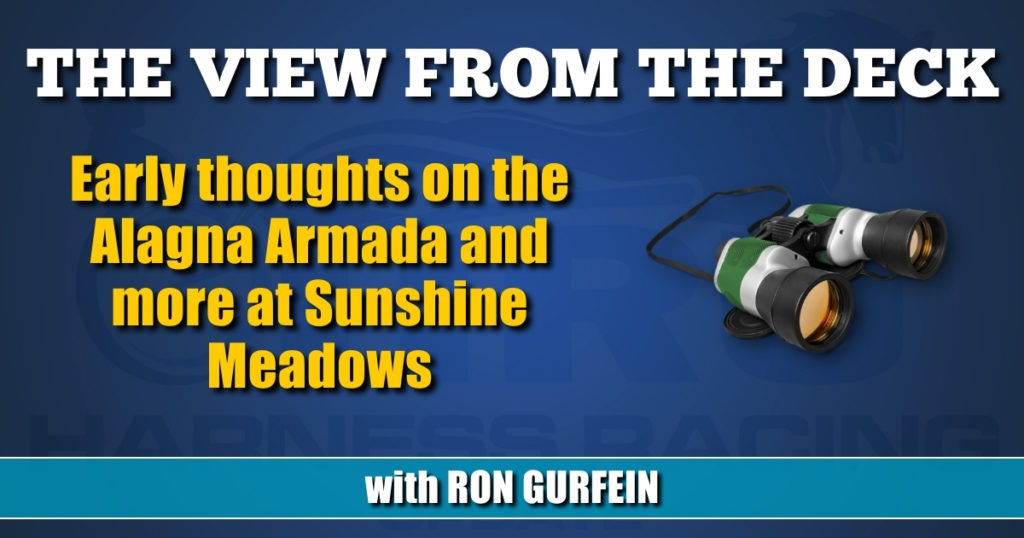 Early thoughts on the Alagna Armada and more at Sunshine Meadows

Considering all the equine talent amassed at Sunshine Meadows, the virus has crushed the turnout. The mainstays, Myron Bell, Sam Bowie, and Jerry Glantz had their usual spots last weekend, but, to them, a visit to The Deck is a six-day-a-week adventure. The rest of the group were the mainstays of the Tony Alagna Stable.

This year, I am only going to write about horses that stood out amongst the others.

Last Saturday, Alagna trained eight sets of 2-year-olds among them some very talented babies with big pedigrees to boot.

Set five included seven absolutely flawless pacing fillies. I was impressed that all were so nice. Captains Princess, a Captaintreacherous filly from Evelix AM, finished on top and may get an edge on looks alone in this group going the mile in 2:49.

Set six included my favorite of the day. A Chapter Seven sister to Ramona Hill. Her name is La Vie En Blanc and she really looked the part.

Set seven was featured by Superbly, the aptly-named lass by American Ideal from Triple V Hanover. She tripped the timer in 2:52 and looked great doing it.

Set eight was filled with some very nicely gaited trotters. I liked TNT Blue Chip, a Walner colt from This Lady’s Dynamite, and Travel Blog, a father Patrick colt from Anywhere With You. Both were in good form in 2:49.

From Lindy Farm I caught a nice pair of 3-year-olds: Captain Terror and Goodashim, a brother to Father Patrick, going a mile in 2:24.

From Fred Grant there were two nice sets. In the first, a Nuncio colt named Aggiornamento out of Tuonela and a Nuncio filly, Gloriosi, from Widdershins, looked great in a mile in 3:00. Then, two really nice Bar Hopping fillies —Devine Moonshine out of Snow Angel Hanover and Ulysses Hanover from Upfront Hotsey — went a similar mile.

I heard from the grapevine that a set of Lindy Farm pacers clocked a mile in 2:34. Stay tuned for the details.

I will give all the stable roosters by the end of the month but I will start with the Alagna Armada today.

Special thanks to Glantz, a permanent fixture on The Deck. Without his expertise and assistance I would be unable to perform this service.