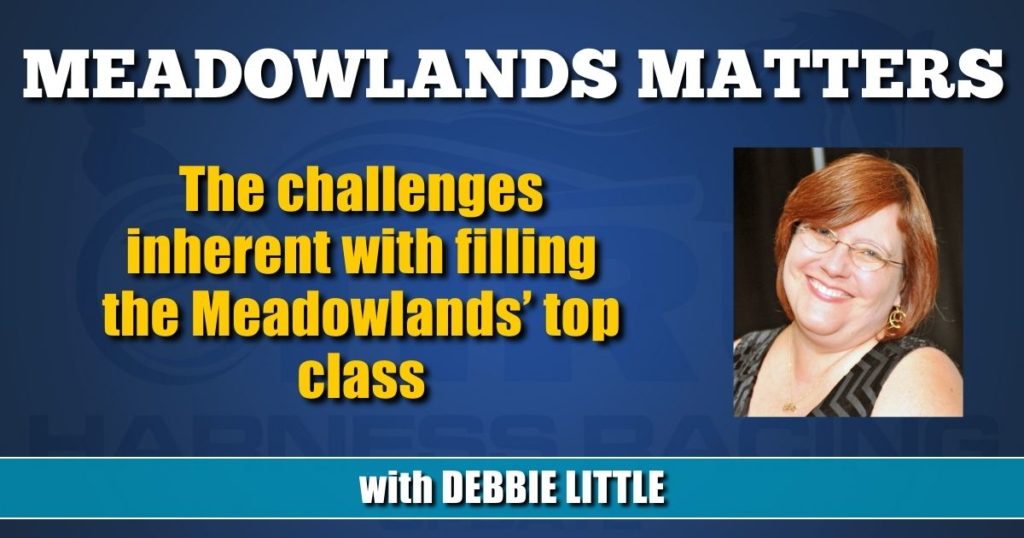 The challenges inherent with filling the Meadowlands’ top class

For years, January at The Meadowlands meant open-caliber horses competing in the Presidential Series.

Older pacers – such as Cambest, Covert Action, Gallo Blue Chip and Red Bow Tie, to name a few – raced in that series sometimes as a prep for the George M Levy Series [renamed the MGM Borgata Pacing Series] at Yonkers in March.

But with the Presidential discontinued, what do horses of that caliber do now during the winter?

Many take a well-deserved break.

Ron Burke trainees Backstreet Shadow, Cattlewash, Dorsoduro Hanover, Filibuster Hanover and This Is The Plan are all still turned out.

“A lot of mine don’t even do the Borgata race because the truth is, if you want to do that series – unless you’re Foiled Again – it’s hard to go through that series five weeks in a row and then expect them to be good for the rest of the year when Breeders Crowns and all the other races come up,” said Burke. “There are not many horses that you can keep sharp for nine months. They don’t give any of those aged races away. Especially now, there are so many horses with high, high speed. Nobody’s a throw out.”

“I know my horses are good horses, but I’m aiming for the end of the year,” said Burke. “I can’t have them race in January and still be trying to win the Breeders Crown in October or November. I’m looking to extend my horse’s careers until they’re 8-, 9-, 10-years old. I’m not looking to burn them up at 4, 5 or 6.”

For those top horses who are still in training, the Meadowlands’ top race right now is the Preferred, which, unfortunately for the fans wanting to see these top horses week after week, doesn’t always fill.

“I love to race and I wish I could race all 30 or more each week, but it just doesn’t happen,” said Jeff Cullipher, who trains both Ana Afreet N and Harambe Deo. “And I try to stay pretty loyal to the Meadowlands and race as much as I can there. I like the bigger track.”

“It seems like it doesn’t matter how much money I offer, it’s still a struggle for me to fill the top end because it’s so tough,” said Meadowlands race secretary Scott Warren. “You can go to Yonkers – not that it’s easier over there – but it’s easier than having to go [1:]48 at the Meadowlands.”

Last Saturday (Jan. 2), the Nifty Norman-trained Let It Ride N put on a stellar performance in the Open – Preferred Handicap, but this week the race won’t go because only one horse dropped in the box.

As it turns out, a few of those participants, including Let It Ride N, are in an Open Handicap at Yonkers on Monday.

“If you’re going to pay him into the Levy you better find out he can get around that track,” said Norman.

What has made these top-level fall/wnter Big M races interesting is that there has not been a repeat winner.

American History, Ana Afreet N, Harambe Deo, Highalator, Let It Ride N and Western Joe have all taken turns in the winner’s circle and only two were the betting favorite.

Some of these horses also raced in Open or Preferred Handicaps in December at Dover Downs.

Hensley explained that this is the bread and butter time for his local horsemen.

“So, if I don’t fill an Open or I don’t fill a Preferred it doesn’t give me a lot of agita, quite honestly,” he said. “I want those races same as every other racing office, same as every other racetrack. I think those races are necessary to keep the product at a level where you can keep that interest up in the export market. But equally, I want our local guys getting raced as much as possible, too. Maybe this would make me unique, I don’t know, I’d almost err on using a local race over an Open or a Preferred at times on this racing product.”

All tracks want to put on the best race possible, which includes a full field of competitive horses to insure a good handle, but unlike their neighboring tracks with slot-enriched purses, it’s more important for The Meadowlands.

“We have the sports betting, but our money – a lot of it – depends on how much is bet on the actual races,” said Warren. “You’ll see Dover go with a six-horse field because at the end of the day, it’s not going to make a difference what they bet on that race. A lot of times I have six in a race and it would be nice to go with that six, but you try to put on as many 10-horse fields as possible because we do bet the money that we bet and it makes a difference.”

Ana Afreet N has not raced since Dec. 20, but is aiming to be back for Borgata.

“We had a plan that we were going to go close to the end of the year with Ana Afreet and then call it quits for a month or so,” said Cullipher. “So, it worked out. He was sharp all the way until the end and hopefully he comes back as sharp.”

Norman will give some time off to Let It Ride N after his start at Yonkers on Monday, also planning to enter the Borgata.