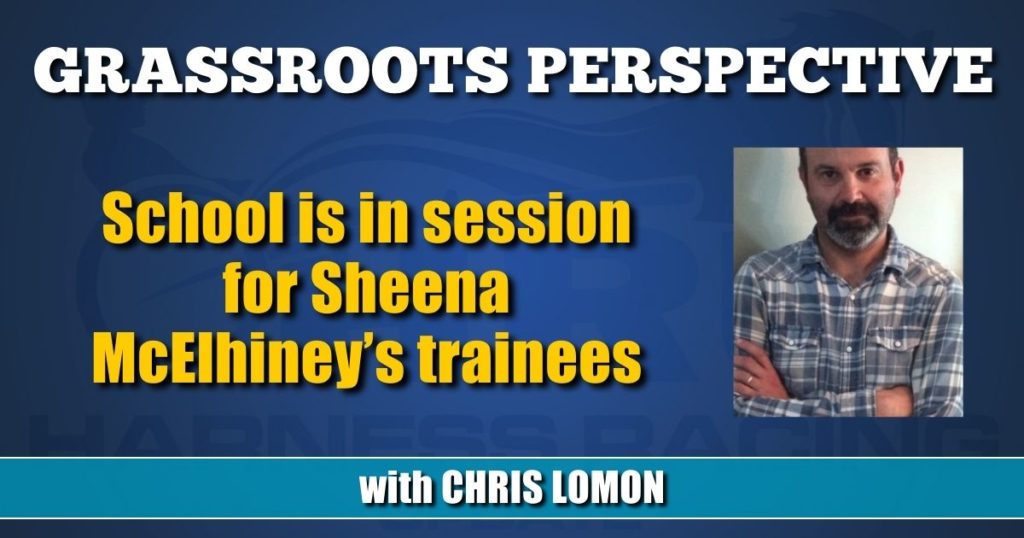 The former student has moved to the head of the class.

Sheena McElhiney’s story could be a horse racing master class of sorts, a tale of a college graduate now earning high marks for her successes in the standardbred world.

Having just completed her third full season as a trainer, the New Jersey-based horsewoman has already made a name for herself in eastern U.S. racing circles, racking up wins and consistent numbers along the way.

Years removed from earning her teaching degree at Central Connecticut State University, her classroom, since 2018, is a farm she calls home in Montague, NJ, and the students – a mix of pacers and trotters – currently numbers 23 (along with two babies).

The biggest highlight of her young career came in November of 2020, courtesy of Leonidas A.

Driven by Austin Siegelman, the then 5-year-old Australian bred, who came to the U.S. in July after the pacer was purchased by Jesermal Stable (nom du course of Steve Finklestein), zipped past 1-5 Bettors Wish to claim top prize in the fifth edition of the $100,000 Potomac Pace Invitational.

Sent off at 15-1, Leonidas A, known for his strong late kick, set a lifetime speed mark of 1:48 in taking his 13th victory on the campaign.

Not surprisingly, the well-traveled son of Mach Three, bred by Roger Bazley (Australia), is a favorite of McElhiney’s.

“He’s just an amazing horse in every way. I remind myself every day of how lucky I am to be part of his life. Hopefully, he has another big year in some big races we’re looking at for him.”

Fire N Diamonds, a now 10-year-old daughter of Up Front Brad (IA), isn’t in her barn anymore, but the pacer with over 215 career starts is another horse McElhiney has great fondness for.

“She was one that I owned and kind of started out with. I love that horse. The little ones, the horses that grind it out at the lower levels, they are the ones that help you learn and hopefully go on to bigger and better things.”

That McElhiney has gone on to bigger and better things isn’t all that surprising.

Her family has had a long connection with horses. She rode horses and was part of the show circuit in Florida, before she joined the standardbred ranks, including time spent as a groom. Her mother, Monique Cohen, is a trainer, and her stepfather, Matt Medeiros, also works with horses.

During her college days, McElhiney managed to squeeze in time to work with the horses and worked one summer at Lindy Farm.

After paddocking and grooming horses for nearly 20 years, she made the decision to go out on her own.

Although she hasn’t had much time to think about her prosperous past year, she did take a few moments to recall some of the more memorable occasions, and a few of the tougher times from 2020.

“With COVID and everything associated with that, it was a really tough go for horsepeople. It made me a little bit nervous at a few points wondering when we’d get back to racing, and how we’d manage to get through the year if it stayed that way. But, luckily, everything started opening up just in time, I guess you could say.

“We headed over to Plainridge [Massachusetts], which is where it all started for me in 2018. We had a really great start over there at the beginning of last year. That was a good confidence boost for us. We were able to get to some other tracks, like Pocono and Yonkers. It ended up being a pretty good year for us. We got Leonidas, and it gave us a good end to the year.”

For someone who “thinks about horses 24/7,” commitment to her craft – and upping her game – is a constant.

It’s why a big part of New Year’s Eve and New Year’s Day were spent working.

“I spent January 1 at the barn,” said McElhiney, with a laugh. “There were no big parties or celebrations for me, knowing what was to come the next day. I fell asleep on the couch around 9:30 at night on December 31, and I was up at 7 the next morning. It wasn’t a very early morning, but there was work to be done. And that’s just fine with me.”

It’s exactly how she views the start of her training her career.

Not that McElhiney anticipated such a strong beginning.

“I didn’t think that in three years I’d have a horse like Leonidas. He’s the best horse I’ve ever trained. And I didn’t think after such a short period of time that I’d have a Breeders Crown horse [Leonidas] like that.”

Personal goals, both in the short term and long term, are a driving force for McElhiney.

Those objectives are tempered by an open mind and a dedication to elevating her horse racing education.

“I like to always improve what I do, and I feel that every day, I’m learning something new, things that can help me become better. In this business, you need to appreciate the fact that you can always learn new skills. With each horse, I always strive do better with them the next time. If they finished out of the money, I want to understand what could have been differently. If they were second, I’ll ask myself, ‘What can I do to get the win next time?’ It’s always trying to figure out to be a little bit better.”

Lessons that push McElhiney to be the most impactful teacher and trainer she can be.

“I guess you can compare some of the horses to children. This might sound silly, but the scheduling of everything with the horses is something a teacher would do with students. I would say what I learned in school – the scheduling aspect – is what has helped me immensely as a trainer. There is so much information that I input on the computer, setting up a weekly schedule for each horse, things like that.

“The first year as a trainer was the hardest for me in terms of getting everything planned out. With any business, it takes some time to see what works best for you, in how you approach your role. Everyone runs their training schedule differently. It’s about coming up with a tailored plan and sticking with that.”

It’s been a winning blueprint for the proud mother of two young sons.

She’s hopeful 2021 will prove to be her best year yet.

“I think that the thing I’m most proud of right now is where I’ve come since 2018, and having a horse like Leonidas. That’s been a dream for me at this point. It’s been really exciting so far, and I hope there’s even bigger things to come.”