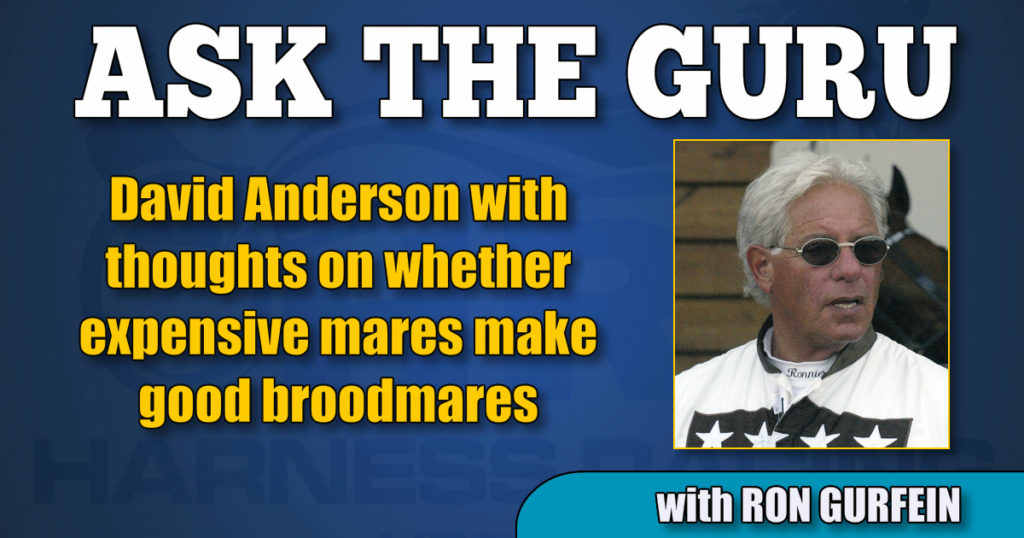 That and much more in this week’s edition of harness racing’s most popular advice column.

Tidbits: I get letters about bad positives all the time and many have merit. This one especially hit a vein. Tim Roach wrote his daughter got three Cannabis positives at Hoosier Park and after moving off track all the horses tested negative.

Subsequently, they were informed that another trainer in the same barn had the same positive at a previous time, yet no one in the judges’ office ever bothered to inform them. I am not pointing any fingers, but if this is a true story I would like to hear from someone in the Indiana Racing Commission how something like this can happen. It is evident if the facts are correct someone dropped the ball.

I may have made a big mistake asking you to make a New Year’s resolution to not ask me about why I defend certain people. I was deluged with complaints.

I will say I understand why there were complaints about my defense of Nick Surick and Lou Pena. They were two entirely different situations, but both were treated unfairly in the charges. Surick was banished without any due process. Lou Pena got railroaded by the New York racing commission with the most ridiculous trumped up charges that were so bizarre they could have put me out of business if similarly charged. I was never in either trainer’s corner. In fact, if you read my column of two weeks ago, they both fit in my scenario of trainers I would throw out if I was a track owner not caring what they had to say in their own defense. To me, winning at the rates they accomplished is proof enough of cheating.

But the law is the law and we are all entitled to a fair and equitable judgement by our peers, which is something simply lacking in both these cases. Do I think they are both guilty of using performance enhancing drugs? 100% YES. However, this is still the USA and you are innocent until proven guilty. People do not go to prison on opinion.

Kenneth Stout asks: Just read an interesting article about some of the greatest racing fillies and mares that were duds as broodmares. I just saw that (thoroughbred) Monomoy Girl sold for $9,500,000. Any thoughts?

Unfortunately, I have had little success in that department myself. Thankfully, I learned early on that great fillies do not necessarily make great broodmares.

Just at the beginning of my career I was fortunate to have the first foal of Cami Almahurst, the fabulous Gene Reigle-trained lass. The colt was sired by none other than the top stallion of the day Speedy Crown. He had no ability and I learned my first big lesson.

Not one of the many great mares I have trained, like Imperfection, Continentalvictory, Cayster, Kerry’s Crown, and Beat the Wheel, have ever had a great horse. Most have never had a nice horse.

Thankfully, I only bought one foal at public auction from all the foals they had and that one was a dud.

Wondering if the pickings were better on the thoroughbred side I called my good friend David Anderson who has had great success as a thoroughbred breeder. He sold the first foal of a good looking maiden, for $1.1 million and this year sold a filly out of the same mare for $1. 6 million. He didn’t have similar success in the standardbred business. However, he did get very lucky with his great racing filly Pampered Princess.

After having three foals that were less than wonderful he was fortunate to sell her to Brixton Medical for a nice high six-figure sum. She has yet to have a good foal.

David points out that many great thoroughbred mares fall into the same category.

Mandy Pope purchased Havre de Grace for $10 million and John Ferguson bought Ashado for $9 million. Both are mares as formidable as they come. We are still waiting to see a good runner from either one of these great mares. Zenyatta is another one that fits the same mold.

The one exception that David mentioned was Rachel Alexandra who has had a top filly.

He claims that rarely are these mares bought for the commercial market. Most often they are bought so the buyer can race their foals.

Anderson said, “It’s like buying a piece of art.”

From our conversation I learned that in the commercial market, which is mainly his objective, “if the yearling doesn’t stand perfectly, doesn’t vet, or the sire is not the flavor of the day, you are cooked. To have a major success the stars must be aligned.”

Basically, there is no difference in the two breeds. It is no more likely for a great mare to have a great foal than a lesser one.

There are differences in the way a sophisticated buyer looks at the animal in the two sports. The thoroughbred buyer is more interested in appearance than pedigree. I think the opposite is more evident in our sport although not all the time. I have seen many beautiful yearlings over sell their pedigree.

David used Bob Baffert as the example of the profound horse buyer. He is rarely seen with a catalog in his hand. He stands in the back ring and watches every horse. He has made a career of buying an athlete.

Some interesting notes on our little talk. David had been out of the standardbred business since 2010 when his father Bob Anderson — A wonderful friend and an avid supporter of our sport — passed away. Since his return to our business he has noticed a lot of positive changes.

“I find a big improvement in conformation, no weak hind quarters and more balance. Many more good horses,” he said.

A fault he finds is that many new, inexperienced owners thank the horses are like race cars — fill them with gas, change the oil, put on new tires and go. It comes down to we must go to this race next week because it is on the list. There is never a thought that a horse may need a rest. That just never comes to mind.

On the brighter side, Anderson has been trying for months to buy a share in Charlatan the early favorite for the 2020 Kentucky Derby that tweaked an ankle winning the Arkansas Derby that ended his trail to the Triple Crown.

In the middle of last week his dream came true and he purchased a share, just three days before Charlatan set the horse world ablaze with an amazing five-length victory in the Grade 1 Malibu Stake at Santa Anita.

“Mike Smith shut him down mid-stretch or it would have been a stakes record,” Anderson said.

Thomas Santoro asks: What are your thoughts on retiring 3 year olds? Does it hurt the game? Do you believe the sport needs its stars?

This is certainly not the time to worry about the sport’s stars. This is survival of the fittest. Let’s be thankful we still have a sport and that it is — for all intents and purposes — thriving in its own way in a pandemic.

Sadly, the only thing that matters today is that the owners and breeders are able to make enough to stay afloat. The Lexington sale was amazing and with the change of venue Harrisburg survived. Sales in the Midwest were very good. How long can that sustain itself under these circumstances?

For the moment, cashing in 3 year olds is financially expedient. If times change would I like to see more horses remain on the track? Of course I would.

That said, I feel that being forced into a 4-year-old campaign by a Gural rule is counterproductive as has been proven with the test of time.

When life returns to normal, if the tracks want to encourage racing older horses let them put up the money to support it? Why not add 4-year-old and older stakes to the format. The fees could be small because of the amount of time involved in payments and it would provide a much more equal playing field than early closers that only attract stick out performers and very small fields.

Joel Cravet asks: What is the quickest you ever gave up on a yearling you bought as a non- athlete? What is the one you stuck with the longest to get the results you hoped for?

About 10 years ago I bought a Well Said colt in partnership with Jerry Silva at Harrisburg. I don’t even remember his name or maybe I don’t want to ever hear his name. To say he was non-athletic would be a compliment. He was sound, no EPM or motor problems, just totally uncoordinated. He would trip himself incessantly and oft-times fall down. Neither Chris Lakata, my assistant, nor I had any desire whatsoever to sit behind him. Top it all off, he was slow. Jerry to the rescue. All I had to say was we have to get rid of him and in 24 hours Jerry had him sold at a price I would be embarrassed to admit.

As far as hanging on to one for any length of time, that really never happened in my barn. I was filled with owners desiring instant gratification and in no way were they going to listen to “he needs more time.” That’s a quote from a sales catalogue not to be uttered from the lips of yours truly. Rarely did I have an owner that would want to bring an unraced 2-year-old back at 3. If one day I remember a story about one that I did spend some extra time with I will put it in print.

Thank you all once again for all the wonderful emails. Please keep the questions coming in. Have a healthy and happy New Year.