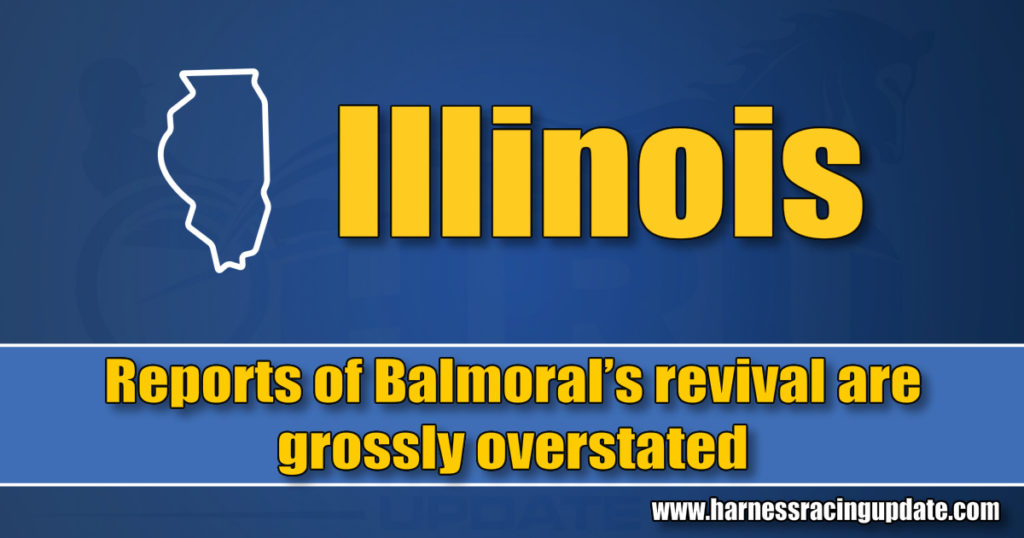 Balmoral Park, which has been out of racing since Dec. 26, 2015, last week was back in the news for the second time in just over 12 months, but it appears there are no racing ramifications.

The Chicago Tribune reported that the property is on the market with an asking price of $4 million, a puzzling development in view of the fact that last December the property was under contract to be sold by New York-based Horse Shows in the Sun (HITS) to Team Real Estate Development, LLC. a group headed by suburban Chicago real estate developer Phil Goldberg.

HITS purchased the track out of bankruptcy for $1.6 million in 2016 and transformed it into a show-jumping venue, starting in 2017.

Goldberg’s plans called for the resumption of racing and the addition of casino gambling, which was legalized in Illinois in 2019.

But there are major barriers to both racing and casino gambling.

• Balmoral is in Will County and the 2019 legislation mandates that any harness track/casino must be located in Cook County in one of six south suburban Chicago townships;

• Balmoral’s deed stipulates that neither racing nor gambling of any sort can be conducted at the site until 2026;

Neither HITS nor Goldberg has responded to requests for comment.

“Nothing has changed, it’s a rehash of an old story and for us it’s a non-story,” Illinois Harness Horsemen’s Association executive director Tony Somone told Harness Racing Update.

“I think Goldberg put down some money and had a hold on it with the option to buy within a year. Then, just before it was to go through, he pulled back and said ‘Never mind.’

“There was a half-hearted attempt last spring to change the legislation (and allow a racino in Will County) but nothing came of it. Although I’d love to race at Balmoral it’s no longer a good spot for a casino and there are those big hurdles facing anyone who tries to bring back the track.”

Hawthorne is the state’s only remaining pari-mutuel harness track and is in the process of renovating to incorporate a casino on the premises in 2021. The 63-night May 7-Sept. 26 meeting will be sandwiched between two thoroughbred meetings, March 6-April 25 and Oct. 1-Dec. 31.

The unprecedented harness track shortage in Illinois was created after Balmoral and its sister track, Maywood Park, were forced into bankruptcy in December, 2014 because of an $84 million judgement awarded to the state’s four largest casinos.

The lawsuit stemmed from 2006 legislation that levied a 3 per cent impact fee surcharge on the casinos’ adjusted gross revenue and directed that the funds go the state’s racetracks to be used primarily for purses. When the impact fee expired in 2008 the legislature passed an extension but Gov. Rod Blagojevich, who was in office at the time, didn’t sign it.

When Balmoral president John Johnston asked one of the governor’s top aides the reason for the foot-dragging, the aide attempted to shake him down for a $100,000 campaign contribution. The phone call was being wire-tapped by federal investigators and after Blagojevich finally signed the extension they concluded Johnston was complicit — even though he never made the contribution.

The four casinos then launched their successful lawsuit.

Blagojevich, meanwhile, was found guilty of trying to sell president Barack Obama’s Illinois Senate seat and was sent to prison. His sentence was commuted by president Donald Trump this year.

With Balmoral and Maywood shut down, and with Hawthorne time-sharing with the thoroughbreds, Illinois harness racing encountered serious problems and its once-lofty national stature nosedived.

The legislature sought to rectify the situation through the massive racing/gambling expansion bill in the spring of 2019.

But a month after the Illinois Racing Board in the fall of 2019 approved Heidner’s request for a Dec.6-29, 2020 harness meeting, the sale of the property was called off by Gov. J.B. Pritzger and the dates were revoked.

Since then, the only proposal for a harness track/racino has been Goldberg’s bid from last December that faced enormous and seemingly insurmountable obstacles.

Nevertheless, Somone believes that “things will heat up a bit” in 2021.

“There are at least three or four groups out there who want to be a presence in Illinois,” he explained. “They are waiting to see who is awarded the casino licenses in Chicago and in Waukegan (near the Wisconsin border). Whoever loses Chicago and Waukegan will still want to be in Illinois and they’ll pursue the standardbred racetrack angle.

“I’m confident that by March, April or May we’ll have a clearer picture of what is happening and who the horsemen will end up being partners with.”

Potential “partners” already involved in racino ventures elsewhere in the country might include MGM Resorts International and Hard Rock, which is owned by the Seminole Tribune of Florida. In January, Hard Rock got a foothold in Illinois with the announcement that it is planning a $310 million development in Rockford.