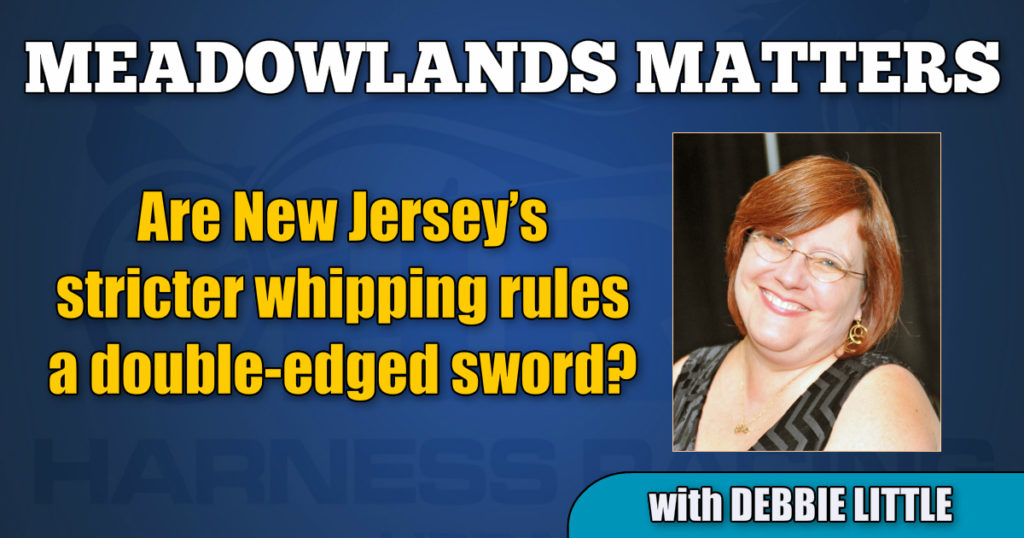 Can modified whipping rules end up being a double-edged sword?

According to the New Jersey Racing Commission (NJRC), the changes were made to protect New Jersey racehorses from harm.

Part of the rules restrict whipping to wrist action only and does not allow for the whipping arm to be raised above the driver’s shoulder height, while another part no longer allows for hitting the wheel disk.

“The rule limits use of the whip to clearly identified areas,” said Leland Moore, a spokesperson for the NJRC. “These limitations, which prohibit hitting the wheel disk, prevent interference with competing race participants.”

This is certainly different from what our fans have seen for years and while it may be being done for positive reasons, it could leave our fans wondering what’s going on.

“When drivers stop driving on a horse because they’re not getting any reaction, the bettors will be like, ‘Why did you stop driving on the horse?’” said trainer Nancy Takter. “Yes, we have to have parameters, but I think we also have to be a little careful about going down a rabbit hole where we’re trying to please people that are never going to be pleased. Because once you establish these types of rules, it’s very hard to take them back.

“We’re never going to please PETA [People for the Ethical Treatment of Animals] and those type of people. They’re not going to be happy until all the animals roam around free on earth. I would love these people to spend a day in my barn and actually see how well these horses are cared for.”

“To me, I think bettors want the horse to be urged right to the wire,” he said. “I get that people don’t want to see these horses flogged around the track – I understand that – but the idea that you can’t bend your elbow or hit the wheel disk? We didn’t need this. It’s just more rules.”

Takter and Burke both expressed the importance of that urging in a sport where the difference between winning and losing can be an inch or less.

“The horse doesn’t know where the finish line is,” said Takter. “That’s the only way the driver can be like, ‘No, we’re not done yet,’ maybe just to keep them on task.”

Burke said he believes even the great Foiled Again would have struggled under these new rules and as a result of the changes has had to make some changes of his own.

“Some of my horses can’t race at the Meadowlands now,” he said. “If you sit there and do nothing, they’re just not going to go.

“If a horse is backing through the field and somebody is beating on one or beating one after the race. Nope. Nope. Give them whatever [penalties] you want to give them. The horse doesn’t even know why he’s being beat there. There was one guy who did something after the race and I texted him: ‘The next horse you abuse of mine after the race will be the last.’”

No one in our sport wants to see horses abused, but will the changes actually have the desired outcome?

Similar rules have been in place for several years in Indiana and Hall of Famer Dave Magee, currently the presiding judge at Harrah’s Hoosier Park, thinks they do have an impact.

“Everyone here is pretty compliant and the fines have been going down consistently because of that,” said Magee.

When Hoosier played host to the Breeders Crown for the first time in 2017, Magee was an associate judge and it was his responsibility to speak with all of the out-of-town drivers and make sure they were familiar with the new rules.

There were no violations during the Crown elims, but during the finals there were a total of six whipping rule offenses for using other than wrist action, which involved five drivers as one was a repeat offender. For each infraction they received a $500 fine and a three-day suspension.

As opposed to 2017, no one received any days, but the fines increased as the infractions occurred and since these were stakes races, the fines were more. The highest amount given was $1,000 for a fourth offense.

“Escalating fines to me seems to be more equitable and focused on the violator,” said Magee. “And it makes a statement to the other drivers that the consequences are well defined and are going to escalate if you consider the same behaviors.”

Since the new rules only went into effect at the Meadowlands on Friday, Nov. 6, it’s a little too soon to know how both the fans and horsemen are adjusting, but one thing that is certain is that the Meadowlands has always prided itself on being at the forefront of doing what’s right for everyone on and off the track.

“We rarely have issues with whipping at the Meadowlands,” said Jason Settlemoir, the track’s chief operating officer and general manager.

For the calendar year, there have been a total of 11 excessive or indiscriminate use of the whip violations and only three of those took place after November 6.

Of those three, one was just a $100 fine, and the other two were $500 fines that also included a five-day suspension.

Considering approximately 8,000 horses competed this year at the Big M, those numbers don’t appear to be too bad, but only time will tell.