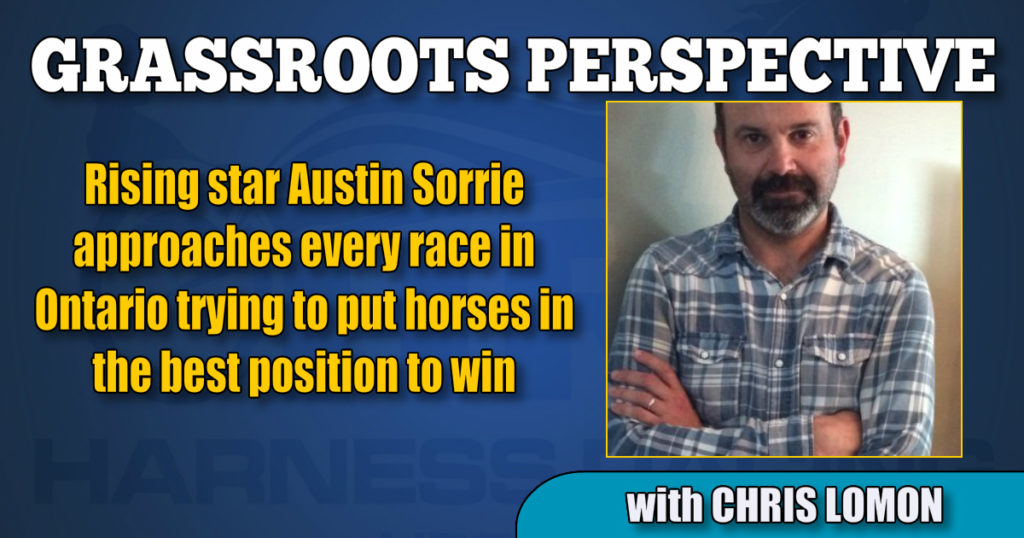 Austin Sorrie had several thoughts racing through his mind as the finish line drew ever closer.

It was just over a year ago on a cold early December night at Woodbine Mohawk Park when the young driver from Montague, PEI and a bay son of Bettors Delight began to draw away from their rivals as the field turned for home.

Holding a 1 ¾-length lead at the stretch call, Sorrie, in rein to Bugsy Maguire, had watched this scene unfold countless times.

Only this time, he wasn’t watching the races.

“I would see the races from Mohawk, and I always remember how many times I’d watch a horse on a fairly comfortable lead get collared late and end up finishing second,” said the 21-year-old. “I saw that happen a lot.”

When Bugsy Maguire started to widen his advantage that evening at Mohawk, Sorrie started having a conversation of sorts as they got close to the infield tote board.

A pep talk would be a more accurate take.

The answer was 1:52.2 from when the duo started and where they ended, three lengths clear of their closest rival.

Owned by Walter Simmons of Summerside, PEI, Bugsy Maguire had already delivered Sorrie with a memorable score earlier in 2019 when they partnered to win the Birthplace of Confederation final in August at Red Shores Charlottetown.

“When you looked at the program at Mohawk, the stats said he was likely third best in the race. I was hoping to finish second or third in my first start there. That’s all I wanted to do. I got away in the two-hole, and at the top of the stretch, I popped him out. He was wanting to go, so I just let him go. And he just flew home.

“I always dreamed about winning Mohawk. I was nervous the first night there, driving against the guys you always hoped you’d have the chance to race against. The guys congratulated me for getting my first win in my first start there. And I got a bunch of text calls from back home too. It was just a great night all around.”

Despite the COVID-19-related challenges in 2020, the reinsman has soared past the numbers he put up last year.

Starts, wins, purse earnings – Sorrie has continued to show the promise he displayed in his rookie season.

That said, the soft-spoken horseman isn’t touting his solid year.

He pauses momentarily, trying to find a particular highlight from 2020.

“It’s been a quiet year. But I still try and push for the goals I set. That’s what I always do. I’ll set goals and keep pushing until I get there. And if I don’t, then it just makes me that much more hungry the next year.”

A finalist for the 2019 Rising Star Award – the honor went to Dave Kelly – Sorrie headed west from the vibrant PEI racing scene to the bright lights of the Ontario circuit nearly two years ago.

At the age of 14, he piloted Onehotvett to a 1:57.2 score in The Kilted Race, Pinette Raceway’s signature event.His win came at Red Shores (Charlottetown) with his own Thebestofme (2:02:1) in May 2018.

These days, competing mainly at Western Fair and Flamboro, Sorrie, whose driver colours are blue, yellow and white (his father, Wade, wore blue and yellow during his years in the sulky), is eager to add more experience and more wins before the end of the year and well beyond.

He has plenty of support, from trainers to Ontario, to his own personal cheering section back home.

“I’m grateful for both,” said Sorrie, who has over 50 victories as a trainer. “The people back in PEI, having them in my corner means a lot. That’s where I started out. To have people still follow you… that’s pretty cool. You look back to those days and everyone that was rooting for you and that they are still doing it.”

“He told me, ‘Time only matters in jail.’ You can look over a program 15 different ways and your horse only shows it can go two minutes, but in Walter’s words, ‘That doesn’t mean anything.’ And that’s the way I approach every race. You try and put yourself in the best situation to win every time. It doesn’t matter if you’re 100-1 or 1-1, if you are in that spot, and you put your horse in the best position, the horse will give you everything.”

That’s very much how Sorrie views his role.

With over 1,000 starts to his name this year, he’s not looking for any down time or a few days off.

If he had his way, he’d be driving nearly every day, with the odd summer day spent in the great outdoors.

“In the summer, we do some boating and Sea-Doing. I love the water. But in the winter, it’s more or less about just staying warm. When you go seven days a week, it’s hard to get time off in the winter, but that’s just fine with me.”

As for what he’d like to achieve on the racetrack for the rest of 2020, Sorrie would simply like to have the opportunity to line horses up behind the gate and chase more trips to the winner’s circle.

After all, sitting behind pacers and trotters is exactly where he’s always wanted to be.

“I just hope we keep racing, to tell you the truth. That would be the biggest thing. It’s not a job if you love doing it. And in that sense, I don’t have a job. When you dream of playing in the NHL and you get there, you don’t see it as a job. That’s how I view being a driver. I was really young when I knew what I wanted to be, maybe 10. That’s all I thought of. I always looked forward to the day it would come true.”

And Sorrie’s never looked back since.